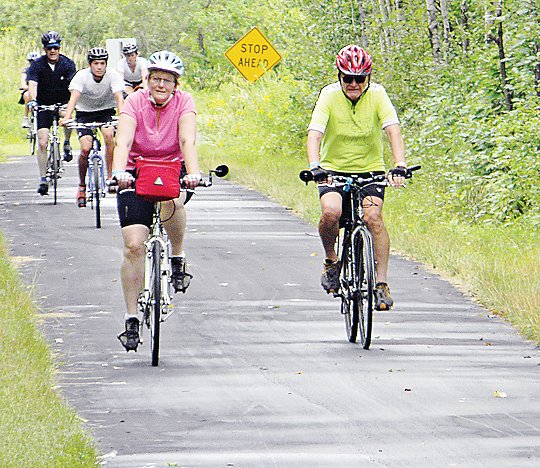 Funding to help complete the popular Mesabi Trail is currently threatened by a dispute between lawmakers.
Posted Wednesday, April 29, 2020 6:20 pm

REGIONAL— A dispute over the use of tax dollars dedicated to outdoor and environmental projects in Minnesota is putting more than $61 million in funding for a wide range of outdoor recreation and environmental projects at risk, including millions of dollars earmarked for projects here in the North Country.
The funds in question come from the Legislative-Citizens Commission on Minnesota Resources, which failed to pass a funding recommendation over the disagreement. The package of funding that the LCCMR board had expected to approve includes $3.1 million for the Crane Lake-Voyageurs National Park campground and visitors center, $1 million for further development of the Mesabi Trail, and $575,000 for wolf research at Voyageurs. It also includes $440,000 for a University of Minnesota researcher working to develop a biological control for the fungus that causes white-nose syndrome in bats and $198,000 for Grand Rapids-based Northern Community Radio to engage more Minnesotans in phenology.
The legislation that includes these funds was also supposed to extend $600,000 in funding for the second phase of trail work around the city of Tower’s harbor, as well as a technical change to allow the city to modify the project from the original proposal. LCCMR Director Becca Nash said she’s hopeful that legislation to extend the deadline for all remaining projects by a year, due to the COVID-19 pandemic, will be approved by the Legislature this session, but that legislation likely won’t include the technical change that Tower needs. “So Tower may get an extension but they couldn’t spend it on what they need to spend it on,” said Nash.
The dispute over $1.5 million in funds for wastewater treatment would seem to be a small sum in a total package worth over $61 million. Sen. Tom Bakk, DFL-Cook, called the dispute “silly” and voiced sympathy for the Senate lead on the LCCMR, Bill Ingebrigtsen, GOP-Alexandria, who had pushed for the inclusion of wastewater funding. According to Bakk, the provision that established the funding stream overseen by the LCCMR allows up to five percent of the funds to go for wastewater infrastructure. “Frankly, I think we probably should do that,” said Bakk.
The situation, however, appears to be a bit more complicated. For thirty years, a state statute prevented any of the LCCMR funding from going to municipal wastewater treatment projects. But when voters approved a constitutional amendment to dedicate lottery proceeds to natural resource projects, the amendment allowed for up to five percent of the proceeds to go toward loans for wastewater treatment projects. Then, two years ago, the Legislature passed a new law, allowing for use of LCCMR funds for wastewater grants.
The inconsistency has generated the dispute, with one camp arguing that the state’s constitutional provision that limits LCCMR funds to loans, rather than grants, supersedes any statute. The other camp argues that the statute is controlling.
“It’s tricky,” says Nash.
To date, those who oppose funding wastewater projects have held sway, but now the other camp is making its point by holding all the LCCMR projects in limbo. In a recent letter to his House counterpart, Rick Hansen, DFL-South St. Paul, Ingebrigtsen upped the ante on the dispute by informing Hansen that the Senate won’t pass any LCCMR appropriations this year.
Grantees concerned
That prospect has alarmed many project organizers and researchers who rely on the LCCMR funding. In a letter to Ingebrigtsen, University of Minnesota Associate Professor Joseph Bump, who heads a research project on gray wolves in Voyageurs National Park, said the research project, and those it supports financially, would be in jeopardy if the funds are not approved this year. “With LCCMR support we employ college students, hire technicians, rent boats and trucks, purchase equipment, gas, and lodging— within Minnesota and mostly in rural Minnesota,” wrote Bump in his April 23 letter to the senator.
The impasse also threatens further delay in completing an already delayed section of the Mesabi Trail between McKinley and Biwabik. “Everyone keeps asking when we’re going to get that one built,” said trail director Bob Manzoline. The LCCMR was to contribute $1 million toward that effort, and failure to approve the funds will delay that project at least another year. “That would not be a good thing,” said Manzoline.
That’s a view that’s widely shared by other potential grantees. LCCMR director Becca Nash said she’s been inundated with emails expressing concern.
Compromise?
While the situation is upsetting organizations and researchers who rely on the LCCMR funds, Bakk thinks a solution is likely to be found. While Ingebrigtsen’s letter implies he’d prefer to grab the LCCMR dollars for the state’s general fund, Bakk said that’s not really the intent. “I think in the end they’ll broker a deal,” predicts Bakk.
“There’s just too much time left in the session. People generally don’t cut bait until the very end and I think both will have to give something, but it will get done.”
Nash is less certain given the bigger issues that both sides feel are at stake. “There’s even a lawsuit over this,” she said.

A new home for the Ely ambulance?