Heads into Section 7A playoffs as top-seed; will have bye in first round

Heads into Section 7A playoffs as top-seed; will have bye in first round 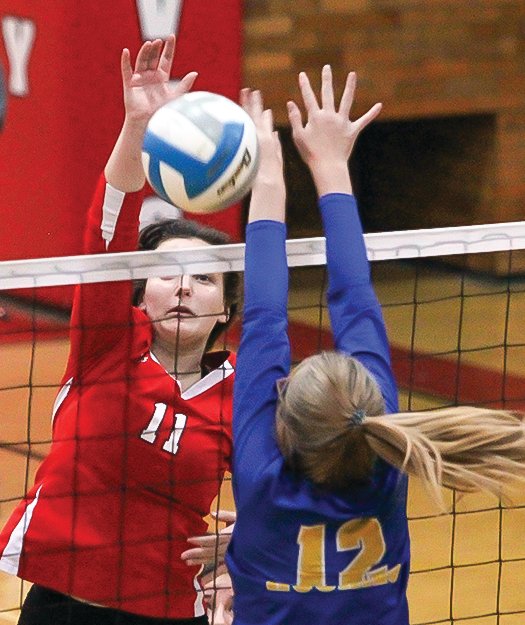 ELY— The Timberwolves wrapped up an impressive regular season at home on Tuesday, as they thoroughly dominated Bigfork in straight sets, 25-17, 25-7, and 25-13.
The win will send Ely, now 19-6, into post-season action as the top seed in the Section 7A playoffs. They’ll enjoy a bye in the first round, which gets underway Monday, and will host their first playoff game on Wednesday.
“I am so proud of how hard these girls have worked this season,” said Ely Head Coach Megan Wognum. “Now the real work begins as we head into the playoffs.”
As she has much of the season, junior Rachel Coughlin led Ely offensively against Bigfork, posting a game-high 11 kills. She added six digs, three aces, and a blocked shot to her totals for the night. Coughlin’s sister Kate also had a strong night, posting seven kills, six digs, and two aces. Senior setter Katrina Seliskar added 25 assists, ten digs, three kills, and three aces, while senior Raven Sainio tallied four kills, a dig, and an ace.
In volleyball action on Monday, Rachel Coughlin had a huge night at Grand Marais as she led the Wolves to a 3-1 victory over the Vikings. Coughlin posted 19 kills and 23 digs and served up an ace in one of the best performances of her career to date. The Wolves took the first set 25-21, then dropped a close second set 25-27 before rebounding for solid wins, 25-14, 25-16, to cap the match.
“It was an excellent game for the Wolves tonight,” said Ely Head Coach Megan Wognum. “We had to fine tune our passing a bit after the first set and the players stepped up and did just that,” she added.
Coughlin wasn’t the only Ely player with a big night Monday. Thomas, who has been one of the top producers for the Wolves all season posted an impressive 11 kills, 16 digs, and a block. Seliskar also had a strong performance, with 41 set assists, 13 digs, and three aces. Kate Coughlin tallied five kills in addition to 18 digs and a pair of aces, while junior Madeline Kallberg added six kills, three digs, and two aces. Senior Raven Sainio added two kills and nine digs, while fellow senior Charly Flom added nine digs.
Rachel Coughlin led the Wolves offensively last Thursday as well, when Ely treated visiting Nashwauk-Keewatin to a three-set drubbing, 25-9, 25-19, and 25-17. Coughlin posted 11 kills, nine digs, and blocked four shots, while Thomas added four kills, 11 digs, and three blocked shots. Kallberg added five kills and five digs while Kate Coughlin posted two kills, 11 digs. Seliskar added 28 set assists, two digs, and three aces. A total of a dozen Ely players posted stats for the match, showing the team’s depth.
“We had solid fundamentals all around,” said Wognum. “It was nice to be able to get some other players on the court for a bit as well.”