COTTON— The unbeaten Timberwolves seem to get stronger every game and they showed it again on Tuesday as they outscored Lakeview Christian Academy 25-4, 25-14, and 25-2 to further cement their … 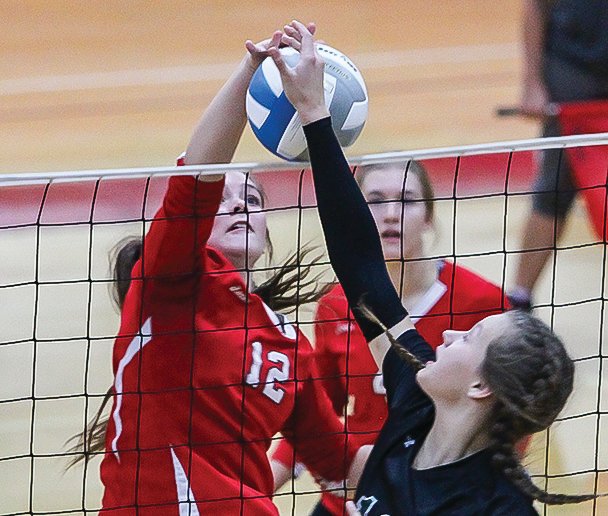 COTTON— The unbeaten Timberwolves seem to get stronger every game and they showed it again on Tuesday as they outscored Lakeview Christian Academy 25-4, 25-14, and 25-2 to further cement their reputation as the team to beat in Section 7A this year. The win came despite the absence of Kate and Rachel Coughlin, two of the team’s most reliable stat producers.
The Wolves relied on crisp passing and an effective serving attack that tallied 26 aces as they crushed the Lions on their home court. “We had phenomenal passing tonight, which allowed our offense to be quicker,” said Ely Head Coach Megan Wognum after the game. “It’s nice to see us using opportunities to try new things in games.”
Junior Hannah Penke, who has been having an outstanding season for the Wolves, again led the team in kills, with ten, along with nine digs and three aces. Sophomore Lilli Rechichi, who has been coming on strong, had a big night, with eight kills, five digs and seven aces, while classmate Clare Thomas posted six kills and seven aces. Senior Madeline Kallberg added six kills, seven set assists, and three aces, while junior Sarah Visser tallied 17 assists and six aces.
Tuesday’s win was just the latest in Ely’s undefeated season. On Monday, they dominated Northeast Range, outscoring the Nighthawks 75-26 in the match. The Wolves took the sets 25-12, 25-9, and 25-5.
As has become the team’s pattern, the stats were widely shared once again, as Penke notched seven kills, to six for Kallberg and Kate Coughlin. Rechichi added five kills while Rachel Coughlin posted four. Penke, Visser, and Rachel Coughlin each added six digs, while Kallberg and Thomas notched five. Visser and Kallberg tallied 19 and 14 assists respectively, while Visser added six aces to the mix.
The Wolves were set to take part in the Mesabi East tournament on Saturday. They’ll take on Mt. Iron-Buhl next Tuesday and Nashwauk-Keewatin on Thursday. Their regular season wraps up the following week as they host Cook County on Monday, Oct. 17 and travel to Bigfork for their regular season finale the following day.