ELY— Former Minnesota Department of Natural Resources Commissioner Tom Landwehr has joined the Campaign to Save the Boundary Waters as its new executive director. The campaign made that … 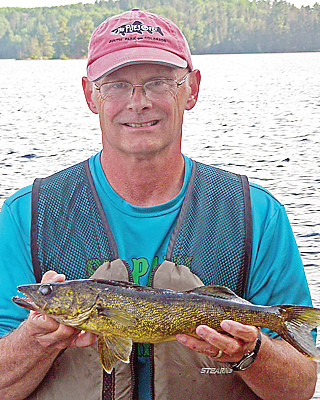 ELY— Former Minnesota Department of Natural Resources Commissioner Tom Landwehr has joined the Campaign to Save the Boundary Waters as its new executive director. The campaign made that announcement on March 5, although Landwehr said he started his new position several days before his hiring was made public. “I’ve been focused on getting up to speed,” said Landwehr in an interview with the Timberjay this week.

For Landwehr, who spent eight years as DNR commissioner under Gov. Mark Dayton, the decision to join the campaign was a personal one, that was reinforced by his many trips into the 1.1 million-acre wilderness near Ely. “My jaw dropped when I first learned of the Twin Metals project because of its proximity to the Boundary Waters,” he said. In particular, noted Landwehr, the mine would be located along the Kawishiwi river system, just upstream from his favorite wilderness entry point, at Little Gabbro Lake.

“We wouldn't dig a huge mine next to Yellowstone or the Grand Canyon, and we shouldn't dig one next to the Boundary Waters,” he said.

For the campaign, the hiring of a well-known and respected former top state natural resources official is a big deal. “We are thrilled to have Tom as executive director,” said National Chair Becky Rom. “He is the right person at the right time to lead our campaign to protect America’s most popular wilderness from the threat of sulfide-ore copper mining.”

Landwehr’s hiring comes at a critical juncture in the fight to preserve the nation’s most popular wilderness area. Currently the Trump Administration is attempting to fast-track the Twin Metals project by reissuing new mineral leases to the company without required environmental review. In addition, the administration recently cancelled a study into a proposed 20-year mineral leasing ban that would include the area Twin Metals is considering for a proposed copper-nickel mine.

“Federal agency leadership in D.C. are ignoring laws and policies in order to push this project through,” said Landwehr. “Those laws and policies are intended to protect people and the environment, and I simply can't stand by and watch that.”

Landwehr said information the campaign has obtained shows that the administration began its push to advance the Twin Metals project almost from the day President Trump took office. “Within three weeks of the inauguration, there was already discussion about how to overturn the previous decision,” he said, referring to the decision in the final weeks of the Obama administration to cancel two federal mineral leases critical to the mine’s prospects.

Landwehr said he sees a connection between the administration’s efforts and the personal connection between Ivanka and Jared Kushner and Andronico Luksic, who rents a 7,000 square foot Washington, D.C., mansion to the members of Trump’s inner circle. Luksic is the billionaire primary owner of the Chilean mining giant Antofagasta, which controls the Twin Metals project.

Landwehr said he doesn’t expect a change in direction for the campaign under his leadership. “The campaign has done an excellent job,” he said. “This really is a David and Goliath battle, with a small nonprofit going up against a huge foreign corporation. Our grassroots educational efforts are critical to our success and that outreach will continue.”

Landwehr’s new position as an outspoken opponent of a proposed copper-nickel mine could appear somewhat at odds with his previous role as the DNR commissioner who gave the green light to the PolyMet copper-nickel mine located about 12 miles from the proposed Twin Metals project. “People need to understand this is not a PolyMet,” said Landwehr. “It’s pristine.”

The proposed PolyMet mine is also located in the Lake Superior watershed, so possible contamination from the mine would likely not flow into the BWCAW. “Any problems with Twin Metals will negatively impact the Boundary Waters,” said Landwehr. “The margin of error here is absolutely zero, and it would destroy a national treasure.”

The Campaign to Save the Boundary Waters is a broad coalition of more than 35 partner organizations, including conservation, sportsmen and veterans’ groups. The Campaign is also supported by more than 300 local and national businesses. The Campaign is led by Northeastern Minnesotans for Wilderness, based in Ely. For more information, visit: SavetheBoundaryWaters.org.