Vermilion has lost almost three weeks of ice cover since 1967

REGIONAL— The season of ice cover is growing shorter in Minnesota, and that includes lake ice here in the North Country. While the changing climate is being felt in many ways, few can be as …

Vermilion has lost almost three weeks of ice cover since 1967 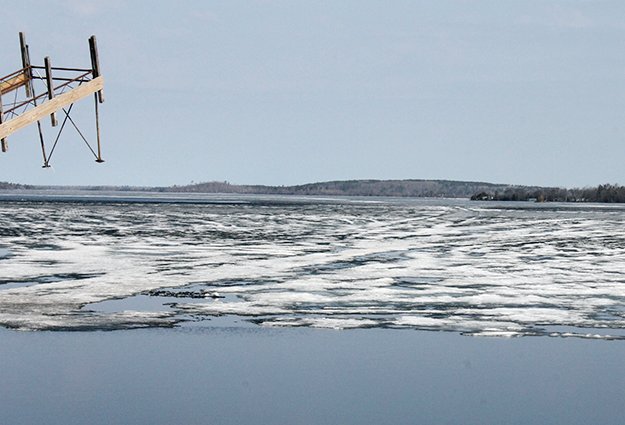 Lingering ice from a recent spring on Lake Vermilion. The period of ice cover on the lake has diminished by nearly three weeks since 1967, another sign of the warming planet.
file photo
Posted Wednesday, January 12, 2022 7:00 pm

REGIONAL— The season of ice cover is growing shorter in Minnesota, and that includes lake ice here in the North Country. While the changing climate is being felt in many ways, few can be as readily documented as the shortening period of ice cover on Minnesota lakes.
New data released late last month by the Department of Natural Resources and the state’s Pollution Control Agency show that the state, on average, has lost 10-14 days of ice cover over the past 50 years. Some of the most popular lakes for ice fishing and other outdoor activities have lost almost three weeks of ice, impacting water quality, the health of fish populations, anglers, and business owners.
Lake Vermilion, for example, has seen its period of ice cover fall dramatically over the past 50 years, from about 165 days out of the year to just 142. Milder fall weather appears to be the biggest contributor to the change, with about two-thirds of the change occurring as a result of later ice-in dates on Minnesota lakes. Meanwhile, ice-out dates are also coming earlier, by about four or five days on average.
While the period of ice cover is declining on virtually every lake in the state, differences between lakes make for considerable variability. Just up the road from Vermilion, Burntside Lake has seen its period of ice cover decline by just nine days, from 150 days 50 years ago, to 141 days today.
“Shorter lake ice seasons, caused by climate change, are threatening some of Minnesota’s most cherished traditions,” said MPCA Commissioner Katrina Kessler. “We must take bold action to mitigate the devastating effects of climate change — for the sake of our lakes, our economy, and to save winters as we know them in our state.”
According to state officials, Minnesotans and winter visitors spend millions of dollars on winter recreation and a shortened lake ice season threatens the revenue of businesses that support these cold-weather traditions.
The warming climate isn’t just reducing ice cover on Minnesota lakes. Compared to 50 years ago, the average July-August surface water temperatures on Minnesota lakes are 3.0 – 3.9 degrees warmer. This rise has serious ramifications for natural lake habitats. Aside from causing shorter ice seasons, rising water temperatures contribute to increasing reports of toxic blue-green algae blooms, which thrive in temperatures 75 degrees and warmer. Additionally, temperature is a driving force in every aspect of the health of the state’s fish populations, including reproduction, growth, and survival. DNR has tracked trends for many fish species over the last 30 years and found that numbers are clearly changing, with declines in some important cold-water species.
“Minnesota’s ice data reflects the changes that Minnesotans who enjoy our outdoors have already felt,” said DNR Commissioner Sarah Strommen. “As water and air temperatures continue to rise, we can expect to see more shifts in our native fish species, lake health, and winter recreation. DNR and MPCA have been working on climate strategies, but we know further bold action is needed to mitigate the effect of climate change and help preserve the valuable resources that make Minnesota an enviable place to live.”
You can find data on dozens of Minnesota lakes’ ice cover at www.pca.state.mn.us/air/view-data-climate-impacts-our-waters.

“April was a lousy month” to state the obvious