Bob Anderson was a beloved sports announcer and substitute teacher

FIELD TWP- Silence is the last thing one would expect in a gymnasium packed with fans anticipating the start of a North Woods-Ely basketball game, but the silence before last Friday’s boys game …

Bob Anderson was a beloved sports announcer and substitute teacher 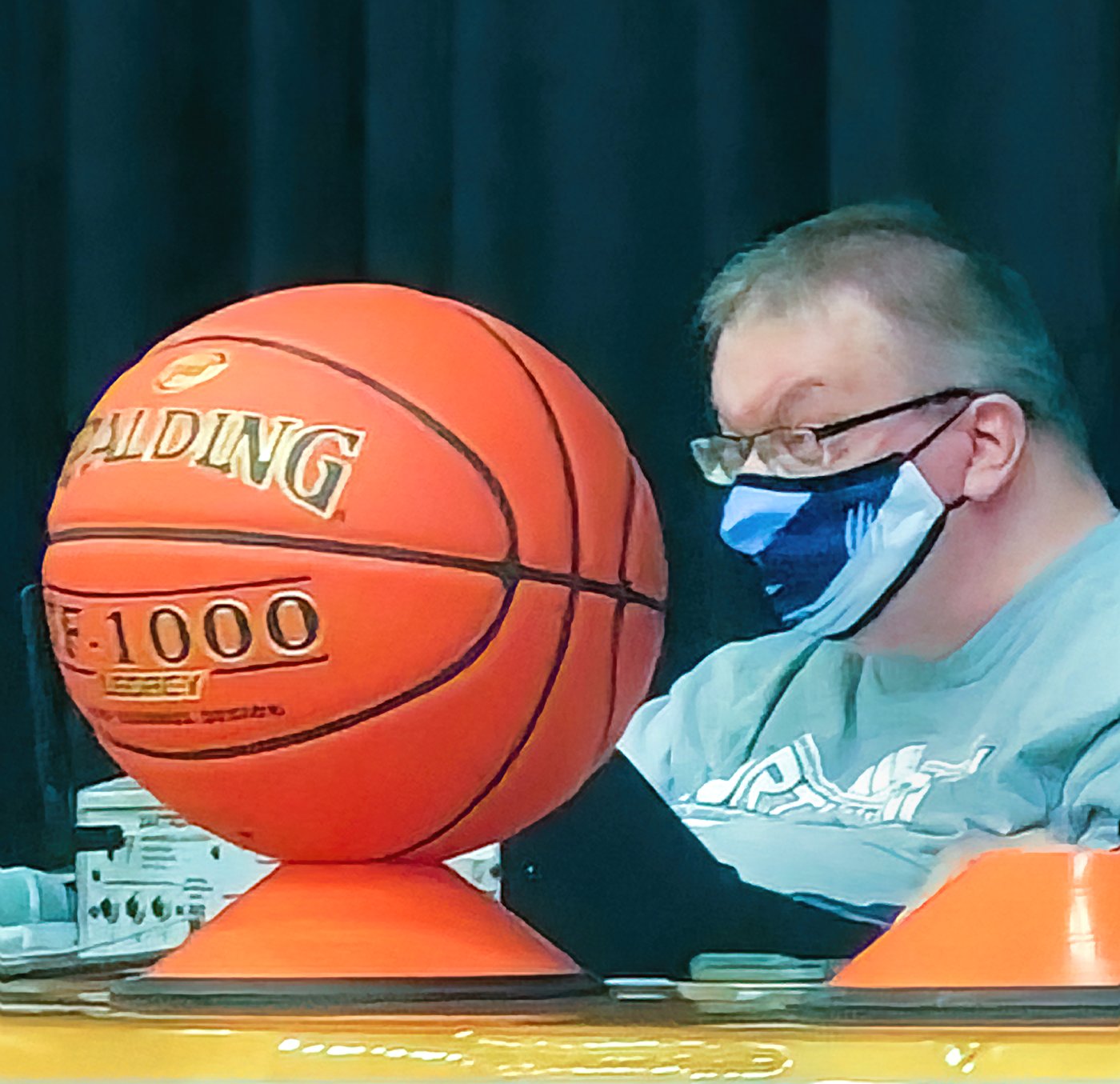 FIELD TWP- Silence is the last thing one would expect in a gymnasium packed with fans anticipating the start of a North Woods-Ely basketball game, but the silence before last Friday’s boys game was stark and solemn.
Nary a sound could be heard as all stood perfectly quiet during a 30-second runoff of the game clock to honor the longtime voice of the Grizzlies, Robert “Bob" Anderson, who passed away unexpectedly on Dec. 31.
“When I said a few words before the game there, I got just overwhelmingly sad,” said Grizzlies boys basketball head coach Will Kleppe after the game. “A lot of the kids really just loved Bob. We’ve had a lot of conversations about him, and I think it hit us all, and I think we’re all feeling that not having Bob here was a whole different environment.”
Anderson, 57, has been the announcer for Grizzlies football, basketball, and volleyball and a beloved substitute teacher at North Woods for so many years that none of those the Timberjay talked to knew quite when it was that he started.
“He had helped me out when we were still at Cook (High School), and we’ve been North Woods for what, 10 years now,” Kleppe said. “I feel like he’s done it forever.”
Kleppe said there was no one more faithful in his support of the Grizzlies than Bob.
“He was so dedicated, he never missed a game,” Kleppe said.
Except Bob did miss one, the Grizzlies’ last home game before winter break against Moose Lake on Dec. 16.
“He was a little under the weather, and honestly, that was the first game for as long as we’ve been North Woods that he had missed – he felt awful about it,” Kleppe said. “That’s just how Bob was, just a nice guy and very selfless when it came to our school.”
No one at North Woods knew Bob Anderson better than Grizzlies head football coach Joel Anderson, his nephew. Joel said that he had Bob as a substitute teacher in grade school well before teaching alongside him as a colleague and listening to him call football games.
“You don’t go into education without a passion and desire to work with kids, and substituting here allowed him to stay with that,” Joel said. “All of the kids seemed to really enjoy having him as a substitute teacher, and as staff we all knew what we were going to get with Bob. Nothing was going to get put over on him, but he wasn’t going to get too worked up about anything. You knew you were going to come back and everything you asked to be done would be done.”
Robert Alan Anderson was a Bear River native who graduated from Cook High School in 1983 and went on to earn an elementary and special education degree. He taught in several smaller schools in southern Minnesota, even serving a stint as a head basketball coach, Joel said, before returning to the area to work as a substitute teacher in Hibbing, Cherry, Cook, and most recently at North Woods. And his love of sports made him a natural to take on the announcer’s job.
“I don’t ever remember a time going into Bob’s house when there wasn’t some sort of sporting event on the TV,” Joel said. “It was just one of his passions, whether it was stock car racing or football or basketball.”
Moving back to the area gave Bob the connections he needed to fully engage in his education and sporting passions, Joel said.
“I think he missed being around his family more than anything,” he said. “This gave him a chance to come back here and keep doing what he was doing, and I think he was able to enjoy it a little more.”
That passion and enjoyment certainly was evident to all through Bob’s mild-mannered, low-key style.
“I saw a lot of tributes on Facebook from students that have long graduated, just some real heartfelt memories of Bob and conversations they had had with him,” Kleppe said. “He was just always present. It was really nice that the kids paid a lot of respect with those nice comments and memories. He made a huge impact and was just well loved by all of our students and staff.”
Grizzlies head girls basketball coach Liz Cheney echoed much of what Kleppe had to say.
“It’s been really inspiring to see how much Bob meant to the kids,” Cheney said. “I only knew Bob as the substitute at the school that the kids loved, and our announcer for all of our athletics. Bob was a very quiet man; he was very kind. Bob was dependable, he was loyal, and that meant the world to the girls. I have seen past players post on their Snapchats or Instagrams ‘Thanks for never missing one of our games.’ He was just always there. He was the backbone -- maybe we didn’t even realize how important Bob was to all of us until now, when Bob’s not here.”
All of it is feedback that Joel Anderson knows his Uncle Bob would be gratified and humbled to receive.
“He enjoyed all of it,” Joel said. “He’s been around long enough to watch a lot of these kids grow up. I think he would be very proud to say that he was able to contribute to the success of a lot of students here.”