ELY – “Our freedoms are under attack and those attacks have only grown over time.”Those words, surprisingly, are not from a MAGA Republican, but from Jennifer Schultz, a DFL … 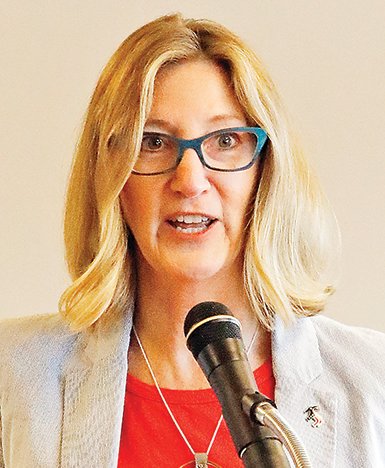 ELY – “Our freedoms are under attack and those attacks have only grown over time.”
Those words, surprisingly, are not from a MAGA Republican, but from Jennifer Schultz, a DFL candidate looking to unseat Pete Stauber in the U.S. House District 8 race this year.
Schultz spoke to a standing-room-only crowd here this week at a Tuesday Group gathering. She is a four-term state representative, with a day job of teaching economics at the University of Minnesota-Duluth since 2004. She had no plan to make a run for Congress when she announced earlier this year she would not seek another term in the Minnesota Legislature.
“I’ve been working on healthcare reform for the past 20 years,” she said. “That’s how I became engaged in politics. I never thought I would be a full-time politician. It was never on my bucket list. But things happen and people asked me to do that.”
Schultz earned a Ph.D. in health economics, while working jobs that paid her less than a minimum wage, by competing for scholarships, and taking out student loans. She rose through her field to become a professor at UMD.
Today she lives in Duluth with her husband and two sons, and said she knows firsthand the everyday concerns of the people in her district after four terms in the state legislature. She serves as chair of the House Human Services Finance and Policy Committee, where she has advanced measures to improve access to affordable healthcare and reduce prescription drug prices. She also serves on Ways and Means, Taxes, Health Finance and Redistricting Committees.
“Nobody would run against Pete Stauber,” she said. “I’m a data nerd. I looked at the data from 2018 and the votes that Gov. Tim Walz got here, and the redistricting, and I decided that I can beat Pete Stauber. I don’t need that many more votes than Walz got. This district has been DFL for the last 70 out of 76 years. We can flip it from red to blue again.”
She continued her attack on Stauber.
“I am tired of political extremists like Pete Stauber,” she said. “I am tired of the disinformation and lies that are coming from the Republican party. I am tired of the divide in our communities and the divide in our families. People want to be able to trust their elected official. They don’t want to hear more lies. They want people who represent them and their values to go and do their job and get things done.”
Schultz talked about the political pendulum that continues to “swing way left and way right with nothing in the middle.” She touted her record of getting things done in the divided Minnesota legislature.
“I’m not just talking about all the bonding projects and local development projects that I’ve gotten funded, but solving problems. I like to fix things that are broken. I know how to work, not just with Republicans, but with our ‘new’ Republicans, those Independents, in our legislature.”
Schultz said she is looking to do the same thing in Washington, D.C.
“We can show D.C. how to get things done if we can get people elected with that as our goal of solving problems,” she said.
“Pete Stauber is very ineffective. He has taken some terrible votes for our region. His biggest no vote was on the infrastructure bill which was $7 billion of investment in Minnesota. That means no to jobs, no to funding roads, bridges, and our port that helps our entire state. Broadband funding was in that bill. He took credit for it but he voted no. He voted no on basic things like affordable insulin. He voted no on solving the shortage of baby formula. He voted no to helping our restaurants and small businesses recover from COVID,” Schutz said.
She added, “He is completely bought by corporate interests. He voted against the recent gun safety legislation. Twice. He gets hundreds of thousands of dollars from the NRA. And the worst one is, he voted no on voting rights legislation, and he signed the Texas lawsuit to invalidate President Biden’s election. He has bought Trump’s Big Lie and that is a huge threat to our democracy. He has to go. He does not represent the interests of his district.”

The mining question
The first question Schultz received from the Ely audience was, of course, about the mining.
“One hundred percent I support our miners and our mining industry,” she responded. “We have been doing taconite mining here for a long time, and we know how it can benefit our communities.”
She continued, “What you need to know is that I support safe and clean mining. I support significant financial assurance so taxpayers aren’t paying for any potential clean-up. I support science. I believe in science and we have to follow science.”
She noted that Stauber “has done nothing” for mining. “We have mines idling and people laid off. There have been no investments in mining. Cliff’s is going to Ohio and building furnaces down there. We should be leveraging the Defense Production Act to look at water and sulfate filtering. We should be producing steel on the Range,” Schultz said.
“Why has Stauber done nothing for mining?” she asked. “He doesn’t want President Biden to get credit for it. He is playing politics over the best interests of the region and the people who live here.”
Schultz said she wants to “be the bridge” between mining and the environment.
“I want to help solve that problem. I’ve been endorsed by both labor groups that have historically supported Stauber. I’ve been endorsed by the DFL environmental caucus and other pro-environmental groups. That’s rare, but that’s a good thing. We need to figure out, when we do any kind of mining, that it doesn’t pollute our ground water or our surface water. When that happens our property values will plummet. It is hard to clean up water that has been polluted.”
Schultz’s statement that she believes Rep. Betty McCollum’s anti-copper nickel mining legislation will pass before she would take office in January drew big applause from the partisan crowd.
“The Duluth Complex is really large and there is a lot of exploration for many minerals, but the concentration is not high enough to be profitable,” she said. “Right now it is cheaper to recycle. In terms of jobs, relying on one industry is not smart. It is smart to have diversification.”
She called for more manufacturing in the North Country.
“We need to be making things again in the United States. We need good union jobs with good benefits.”
Schultz will be in Cook on Wednesday, July 6 at 6:30 p.m. at the Cook Community Center located at 510 Gopher Drive in Cook. The meeting is open to the public.