Healing in the wilderness

Healing in the wilderness 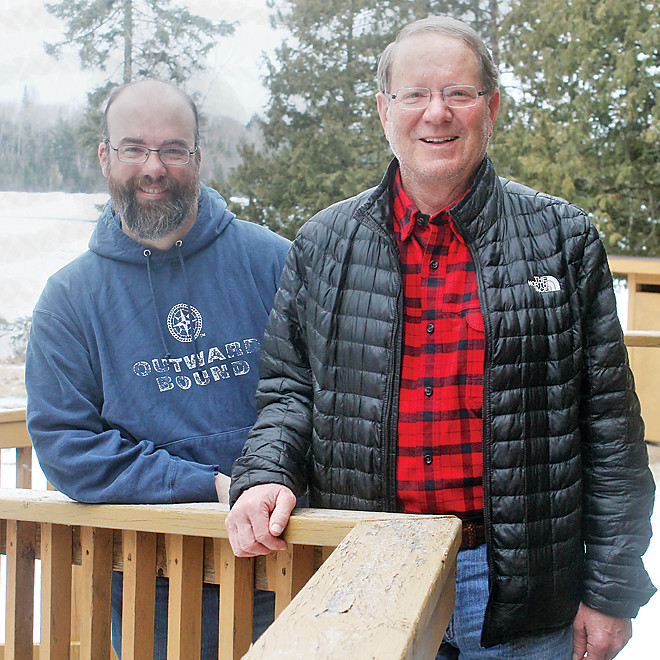 ELY –Veterans who have experienced the mental challenges of returning to normal civilian life following their service to their country just finished a winter camping trip in the Boundary Waters Canoe Area Wilderness.

The veterans are from the Twin Cities area, and are affiliated with the Campaign to Save the Boundary Waters, specifically through the lens of the emerging research on the mental health aspect the wilderness provides, with regards to military veterans.

They served in three different eras of United States military intervention, Vietnam, Iraq and Afghanistan, yet all three experienced varying degrees of post-traumatic stress disorder as a result of their service.

Erik Packard survived two deployments to Iraq, in 2002 and 2008. He is the founder of Veterans for the Boundary Waters.

Doug Kelley is a Vietnam War veteran. He served as an Army Ranger and Green Beret.

Brett Kelley, Doug’s son, recently left the Armed Services after 10 years, including service as a Ranger in Afghanistan.

The three veterans participated on the trip as a way to highlight the Voyageur Outward Bound School veterans programming (http://www.vobs.-org/programs/veterans) and to bring attention to the threat of proposed sulfide-ore copper mining to the Boundary Waters, according to Alex Falconer, state director of the Campaign to Save the Boundary Waters.

“The proposed mining site is very near the VOBS, off of Spruce Road south of Ely, which would be shut down or dislocated, and therefore poses a specific detriment to their veterans programming,” Falconer said.

For more than 30 years, Outward Bound has delivered wilderness expeditions for the nation’s veterans. These expeditions, customized specifically for veterans and active duty service men and women, are designed to help ease the often-difficult transition home by drawing on the healing benefit of the wilderness, teamwork and challenge.

Through support from donors, these courses are available tuition- and travel-expense free to any veteran or active duty service member that has deployed to a combat area. The expeditions are designed to be fun and challenging, and are suited for those in good physical condition. Through the trips, veterans have opportunities  to re-experience many of the positive aspects of military service through challenge and teamwork, develop skills to assist them in adjusting to life at home, candidly discuss obstacles faced by veterans, rediscover physical and emotional strengths, and help translate military values and commitment to service in a civilian environment.

“The BWCA has always been a part of my life,” Packard said. “My father started taking our family there when I was a baby, and it quickly became an annual trip. We would visit other states and Canada, but we would make sure to come back to the Boundary Waters. My father would always say the most beautiful place he had ever seen was still the Boundary Waters. I went to the Boundary Waters in 2002, and not long after that I was deployed to Iraq, during the opening of Operation Iraqi Freedom.”

Doug was joined for part of the recent BWCA winter trip by his son, Brett, who had to leave early to interview for a job. “This was my first trip to the BWCA,” he is a past member of the Board of Directors of Outward Bound.

Both veterans come from a family tradition of military service. ”Our family has had someone in every major war since the Revolutionary War,” Doug said.

Erik explained that when he returned from his first tour of duty in Iraq, his father was losing his battle with cancer and he could not find his place back in the world.

“After my father passed away from the cancer, I thought about the BWCAW all the time, but I didn’t get up here,” Erik said. “When I returned from my 2008 deployment to Iraq, I began to struggle with PTSD, alcohol, depression and suicide. On the insistence of my wife and friends, I finally went back to the Boundary Waters. What I found back in the BWCA was a sense of peace that I thought I had lost forever. I could feel the poison that had infected my soul from the horrors of war being drawn out of me. The trip started the healing process, and when I could make it back it would always refresh me.”

This past December Erik was lucky enough to fulfill a lifelong dream to dogsled in the Boundary Waters through Voyageur Outward Bound School with other veterans. “It was on this trip that I finally felt like I could move on from the war and live fully back in the world,” he said. “On that trip, I found other veterans felt the same sense of healing as I had. The poison that had infected us was pulled out of us by the peace and quiet of the wilderness. Now that peace and quiet is threatened. The mining proposed near the Boundary Waters will forever alter and destroy that peace of the wilderness.”

Erik said one instructor remarked to him last summer that a recent trip for a veterans group was not peaceful because of explosions coming from the exploratory site. “These veterans that fought for their country were not able to have the same peaceful experience because of the interests of foreign mining interests,” he said. “The Boundary Waters and places like it are one of the reasons I pledged my life to this country. The Boundary Waters is a rare commodity in this world, a place that has remained the same as God created it. We can visit it, play and pray in it, or we can destroy it. If this mine goes through, we will forever lose one of God’s most peaceful gifts to all of us.”

This most recent trip was unique in that the military veterans were joined by four young adults. “Some had just graduated from high school and for some, this was their first time camping, ever,” Erik said. The group was out about one week and they experienced all four seasons of the North Country.

“I found it easy to relate to these kids. If I had seen them on the street, I probably would not talk to them,” Erik said.

Doug is a former federal prosecutor and one of the young adults was a former gang member. “We had the wilderness in common where we could open up and talk,” he said. “You don’t have to go to war to have a searing experience in your life.”

Because of his strong feeling for the BWCAW, Erik has founded a military veterans chapter of the Campaign to Save the Boundary Waters. “I decided I had to help protect this place. What it does for me is not unique, I’m just the one who is talking about it,” he said.

Doug has visited the BWCAW for the better part of 50 years. “This is where I learned about the outdoors. Every time I come up here it refreshes my soul and rejuvenates my spirit,” he said

When he was a Republican candidate for governor in 1990, Doug took a strong position against exploratory mining close to the BWCA. “I have had a consistent position on this for a long time,” he said. “I recognize that we need to find jobs for the Iron Range, but this is not the way to do it, not to sacrifice this wonderful pristine jewel that we have up here.”

Erik added,” We can’t risk our identity. I fear this wild place will be lost. I fear that losing the connection to my healing will be losing a piece of myself, and I am afraid of what that would mean for me, for my family and for anyone who needs another answer. I am only one man, but I still believe in fighting for others and I need to do something to stop this from happening.”