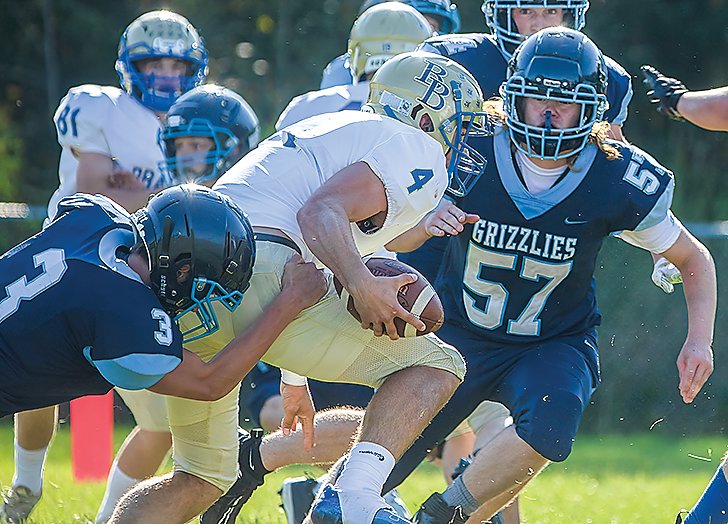 FIELD TWP- The North Woods Grizzlies gave the visiting Braham Bombers all they could handle in the first half last Friday before a late defensive collapse let the Bombers pull away for a 44-14 win.
The defense the Grizzlies put on the field against Braham bore little resemblance to the unit that got scorched for 62 points the week before at Barnum, at least until late in the third quarter.
Braham got a gift in the first quarter when the Grizzlies had a bad snap on a punt and the Bombers took over at the North Woods 18. The Grizzlies made it tough from there, but Braham quarterback Jacob Tepley scored on a five-yard sweep with 3:37 remaining in the quarter to go up 6-0.
North Woods went three-and-out on its next possession, and a good punt return gave the Bombers good field position at the Grizzlies 43. Three plays later, Bombers running back Carsyn Londgren took a pitch and scampered 29 yards for a score. The two-point conversion put Braham ahead 14-0 going into the second quarter.
The Grizzlies’ offense came alive on their next possession, getting big gainers from running back Jared Chiabotti to take the ball from the North Woods 45 to the Braham 2, but the Grizzlies were turned away emptyhanded after being forced backwards to the Bombers 9.
The Grizzlies defense kept the Bombers bottled up deep in their end and forced a punt that gave North Woods the ball on their own 35. It was a three-and-out for the Grizzlies, but Anavey Goodsky-Spears got a favorable roll on his punt that finally came to rest at the Braham 10.
North Woods again won the battle up front, and the Bombers found themselves with a fourth-and-six from their own 14. Tepley dropped back in punt formation but bobbled the snap, giving Goodsky-Spears enough time to swoop in and tackle him at the three-yard-line.
This time the Grizzlies would not be denied, with Chiabotti scoring on a two-yard run with just 55 seconds remaining before halftime. Trajen Barto snagged the two-point conversion pass from Jonah Burnett to cut the deficit to 14-8. The defense closed out the half by turning back another Braham scoring threat to put the cap on one of their best halves of the season.
“We played the game plan like we were supposed to, guys got where they were supposed to be, and they made nice plays,” Grizzlies Head Coach Joel Anderson said. “We made them work for absolutely everything they got. It was anybody’s game there. We had momentum.”
That momentum carried into the second half when Olin Nelson snuffed out the Bombers’ first drive with an interception at the North Woods 27. The Grizzlies gained only 13 yards before being forced to punt, and a nice return by Tepley put the Bombers in business at the North Woods 45.
And in a space of only four minutes on the game clock, what had been a dogfight turned into a Bombers blitzkrieg.
Tepley ripped the Grizzlies for a 23-yard touchdown run, and the two-point conversion made the score 22-8. A North Woods punt from their own 15 on the next possession was returned by Braham’s Tanner Noble to the 14-yard line, and two plays later Tepley connected with Logan Leniz for a touchdown that boosted the lead to 28-8. Barely a minute later, Tepley jumped a Burnett pass at the North Woods 28 and raced to the end zone for another score. The lightning-fast 22-point onslaught was complete when Tepley scored the two-point conversion, and the reeling Grizzlies were suddenly down 36-8.
The Grizzlies mounted a strong 77-yard scoring drive in the fourth quarter, with Chiabotti and fullback Nick Abramson bolting for long runs before Nelson wove and bulled his way into the end zone on a 17-yard pass from Burnett.
Braham recovered the ensuing onside kick and scored the final touchdown of the game on a 38-yard run by Londgren. Tepley ran in the conversion to complete the Bombers’ 44-14 win.
“It was almost as if the wheels just came off there partway through that third quarter,” Anderson said. “I don’t know what it was. After watching the film, it was pretty evident on defense, that we kind of quit being the aggressors. Offensively, we didn’t pick up guys coming through the middle, and no matter what play you call or what offensive set you’re in. If you don’t protect the gaps, you’re not going to get very far down the field.”
The Grizzlies got a scare when Jake Swanson went down along the sideline and didn’t get up in the third quarter. Swanson was alert and gave a thumbs up as he was loaded into the Cook Ambulance as a precautionary measure, but Anderson got good news later that evening.
“He was home already by the time I called them when I left here Friday,” Anderson said.
Various injuries have caused Anderson to have to juggle his lineups this year, creating a challenging wrinkle in a rebuilding season.
“We’ve had a hard time having the consistency to really build the continuity on offense and get really comfortable with where we’re playing on defense,” he said. “But we can play with and compete with anybody in our section. We’ve seen it at times throughout the year. We can’t just play for two quarters here and there. We have to put four quarters together.”
Chiabotti had 108 yards of total offense with 71 rushing yards and a touchdown on 17 carries and 37 yards on three pass receptions. Burnett was eight-of-16 through the air for 63 yards, one touchdown, one conversion, and two interceptions. In addition to his touchdown, Nelson caught another pass for a total of 26 receiving yards.
Chiabotti and Swanson led the defense with six tackles each.
North Woods was scheduled to hit the road to take on 0-5 Mille Lacs this Friday in a battle of teams both hungry to notch their first win of the season. The Grizzlies will be on the road again on Oct. 14 at Mesabi East before closing out the regular season at home on Wednesday, Oct. 19 against East Central.