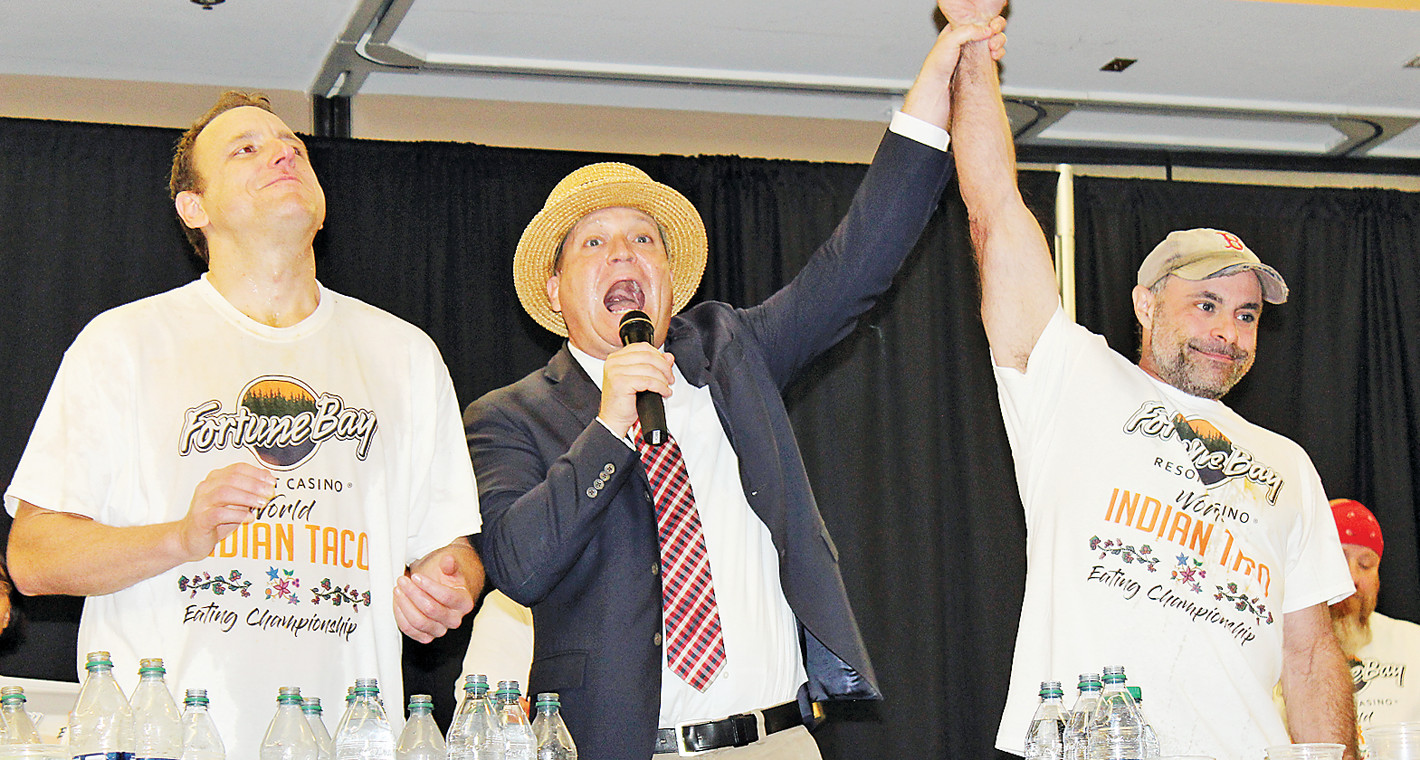 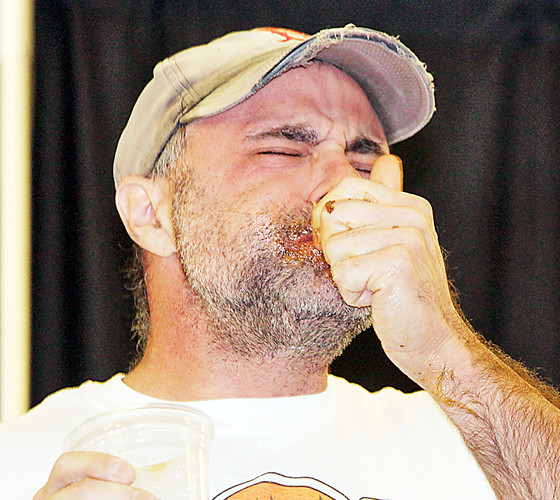 Esper ate 29 tacos in eight minutes, one more than Chestnut.

TOWER- The mood was electric. The crowd was on the edge of their seats. Background music was thumping the room. The competitors were milling about, trying to take the edge off their nerves. The emcee was pacing back and forth on the stage, revving up the crowd– a world record was at stake. The Woodlands Ballroom at Fortune Bay was close to capacity.

It might have been a world heavyweight prize fight, but wait a minute.

This was a contest to see who could eat the most Indian Tacos in eight minutes.

Welcome to the world of Major League Eating (MLE). MLE, if you didn’t know, is the world body that governs “stomach-centric” sports.

On the stage was the current world champion eater, Joey Chestnut. And if that name didn’t ring a bell, it certainly did for many in the audience who had driven quite a way, on snowy roads, to meet the man who currently held 43 MLE world records. MLE’s flagship event is most likely the Fourth of July Nathan’s hotdog eating contest, for which Chestnut currently holds the world record.

Tonight, as emcee Sam Barclay of MLE, repeatedly told the audience, another world record would be set. It was guaranteed, of course, since this was the first time MLE featured Indian Tacos.

David and Stephanie Lukkonen, of Duluth, made the trip to Tower just to meet Chestnut, and they had snagged first row seats.

“I’ve watched him for seven years on ESPN,” David said. The couple was busy posting photos to social media, and said many of their friends were extremely jealous and wished they had made the trip.

Chestnut, from San Jose, Calif., entered his first MLE contest 12 years ago, after his younger brother signed him up.

“It was a lobster-eating contest,” he said, “and I’d never eaten lobster before.”

Chestnut, who was in college studying engineering, tied for third that day, which became the first step in his new full-time career. After graduating from college, he worked in construction management, but kept entering eating contests. A little over five years ago, he became a full-time “eater,” and now travels the country and the globe with MLE.

“My favorite foods are chicken wings and ribs,” he said. “I have a pretty good technique and they are not hard work.”

Indian tacos, on the other hand, were going to be a challenge.

The fried dough bread rounds were going to be tough on the jaw, Chestnut said, and not that easy to swallow. Chestnut had done some practicing at home, prior to this contest.

But Chestnut said he had won two other taco-eating contests this year, and was confident he could power through this competition.

Geoffrey Esper, from Massachusetts, came into the competition ranked fourth in the world.

A high school electronics teacher, he competes about twice a month in MLE. He currently holds the world record for pepperoni roll eating, though he said his favorite competition involved cheeseburgers.

The competition also involved some amateurs. Sean Nichols had driven over from northern Wisconsin. “I’m a good amateur,” he said, “but not ranked.” Nichols was a large guy, and he said that his size is not an advantage in the sport.

Nichols had one of his best showings at the Milwaukee Garlic Festival, where he took second place in the raw garlic eating competition, downing half a pound in two minutes. His goal tonight, he said, was to score in the money, though he didn’t expect to take first or second.

“The garlic was the hardest to eat,” he said. “They burned your throat; you needed to just swallow them whole.”

Sixth-ranked MLE eater, Gideon Oji, who grew up in Nigeria but now lives in Atlanta, Ga., had also made the trip. Tall and lean, he certainly looked like someone who could pack in the food.

Two Fortune Bay employees, Doug Porter and John Tikkunen took part in the event, though neither had done any real training. John (Taco John) Tikkunen said he is known for his ability to eat large portions.

“You will witness history tonight,” barked out Barclay. “What is at stake?” he asked, “Money and glory.” There was a $5,000 purse at stake, with $2,500 to the winner, and then cash prizes for the next five places.

The field tonight, he explained, was elite.

“I could go on all night,” he said, speaking about Chestnut,calling him the “greatest eater in the history of mankind!”

“He is part human, but all eater.”

But then, Barclay introduced the crowd to the up-and-coming Esper, who had beaten Chestnut twice this year.

“Will he take the prize tonight?” he wondered.

As the eleven competitors took their spots on the stage, they readied their equipment, water or other drinks, and plenty of napkins.

And so, as the emcee explained, “in all of sport, a moment so awesome, perched on a cliff edge…the Mt. Sinai of Mastication….Let the contest begin!”

The taco eating itself was not something you would want to watch on a full stomach. Eaters tore the taco bread into pieces, stuffing it into their mouths and swallowing. Sweat mingled with spit, all colored like taco seasoning, as it dripped from mouths and chins. Competitors mostly stood, bodies tense, eyes sometimes closed. Eight minutes is a long time to continuously stuff dense food into one’s mouth. Fortune Bay staff was standing by to replenish plates. The room was quiet. Tower Ambulance staff was in the hall, just in case someone choked.

It was clear from the start that the competition was between Chestnut and Esper. Chestnut got off to a quicker start, but by midway, it appeared to be neck-and-neck, or perhaps mouth-and-mouth. The other eaters almost appeared to be working in slow motion. But what was clear, that there were a lot of tacos were being eaten up on that stage.

When the buzzer rang, it was time to announce the winner; was that the favorite Chestnut, or Esper?

Chestnut was clearly disappointed by the outcome, but was gracious, and insisted he was planning to come back next year to try to claim the title.

Esper, as if 29 tacos weren’t enough, kept munching on the leftover tacos while being interviewed and taking selfies with fans.

“This fry bread is delicious,” he said.

Esper said he knew he was off to a slower start, but then realized he needed to be drinking more water to help the fry bread go down.

“I knew this was going to be hard,” said Chestnut. “But I will work on my technique.”

Barclay said this was one of the tougher events he had overseen.

“This was very demanding,” he said, “and took a lot of jaw strength.”

Sammy Richter, Fortune Bay’s event and promotion manager, said the day had been an absolute “blast.”

He said he was thinking he might be the innovator of idiocy, not sure that the event would attract an audience. But he was clearly on the right track and was excited to see the turnout and the mood in the ballroom.

Fortune Bay kitchen staff, led by Billie Deegan and E.J. Deegan, had dished up 970 plates each weighing exactly one pound and featuring four small Indian Tacos with fry bread and taco meat. The crew had been in the kitchen since 4:30 a.m., and also prepared several hundred additional pieces of fry bread for the Indian Tacos available for sale.

Taking home third place was Gideon Oji. Fourth place went to Matthew Raible of Peoria, Ill., while there was a three-way tie for fifth-place between Mark Pederson of Little Canada, Sean Nichols of Niagara, Wis. and Fortune Bay’s own Doug Porter, who all ate nine Indian Tacos.