ELY – Out-of-town commercial operators have tapped many dozens of maple trees along city boulevards here, and city officials are considering taking steps to address the situation. 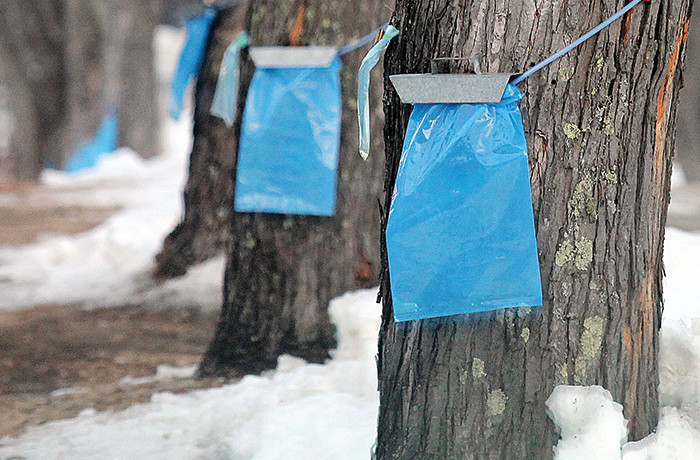 Bright blue plastic bags hang on silver maple trees along James Street in Ely, Wednesday morning. The bags are used to collect sap during the spring. Forty gallons of sap can be boiled down to produce about one gallon of maple syrup.
K. Vandervort
Posted Wednesday, March 21, 2018 5:35 pm

ELY – Out-of-town commercial operators have tapped many dozens of maple trees along city boulevards here, and city officials are considering taking steps to address the situation.

Ely's Tree Board has also raised concerns about the potential for damage to the city's aging stock of mostly silver maples.

In their March 12 meeting minutes, the board agreed that tapping the city trees was not a good idea despite the abundance of material found online that indicates that tapping “doesn’t hurt trees.”

The information referred to relates to sugar maples tapped in the bush. Ely’s silver maples do not compartmentalize wounds as efficiently as sugar maples. “Tapping is not advised on stressed trees even in more natural settings, and the boulevards provide a continually stressed condition,” the Tree Board said. “We are concerned also that the energy that a tree requires to heal from tapping is energy taken away from other activities those stressed trees need to perform to survive.”

The Trees Board is developing the city’s Tree Plan and is considering including language that bars all tapping of trees currently being planted and those that will be planted in the future. “While we prefer that community members refrain from tapping our older silver maples, banning the tapping of the older trees would likely be contentious and does not seem worth acting on, given that the trees are near the ends of their lives” The Tree Board said. “Education in the present and not allowing tapping in the future is the best way to proceed.”

Council member Paul Kess noted the increase in the number of taps and blue plastic bags hanging off more and more trees. “Apparently, the same party is tapping every tree in town. It has gotten out of hand and we should move to address this,” he said. He did not offer any specific recommendations.

Council member Al Forsman suggested that, without an ordinance, asking for trees to be limited to just two taps, might help slow the flow of bleeding the trees to an early death. “The hope is that (the tree tappers) can police themselves to keep the city from taking more formal action,” he said.

Mayor Chuck Novak came to the defense of what he called, ‘the maple syrup gang,” those local citizens who have been tapping the city’s trees for years. “It has been kind of a ritual with them. This year it is different. All of a sudden we have metal brackets and blue bags all over town.”

According to Novak, who discussed the issue with one of the locals, the influx of tappers are from out of town, and they might be selling the maple syrup commercially. “I asked the Police Department to find out who these people are with the blue-bagged taps and where they are from. If they are doing this commercially, see if they have a Department of Health license, and if they are a registered business.”

Novak said the local “maple syrup gang” gives their syrup away to friends.

“My personal perspective is this is theft of city property,” Novak said.

Council member Jerome Debeltz suggested the situation be patrolled by the maple syrup police. “This is unfair and there has to be a way to patrol this,” he said.

Police Chief John Lahtonen said he has no plans at this time to add more officers to his force.

Novak suggested the city issue a permit to tap maple trees on city property. “The permit would be waived for local citizens,” he said. “It would be $2,000 for those who don’t live here. That will keep it in check.”

The council took no action on the issue. Novak asked for the Tree Board to weigh in at the next council meeting.

In other business, the council took the following action:

Approved the council and city staff to attend the 2018 League of Minnesota Cities conference in St. Cloud, June 20-22;

Agreed with the Ely Utility Commission and approved moving forward with issuing $710,000 in bonds for the utility metering project;

Hired Steve Renneberg as a firefighter to replace one who retired;

Scheduled a special council meeting for 5 p.m. on May 17 for the Local Board of Appeal and Equalization meeting.