A litany of woes

REGIONAL— If you mention Frontier Communications to Steve Wilson, of Tower, you’d better have a comfortable chair— you could be there a while.

Wilson, who retired from the Department of …

A litany of woes 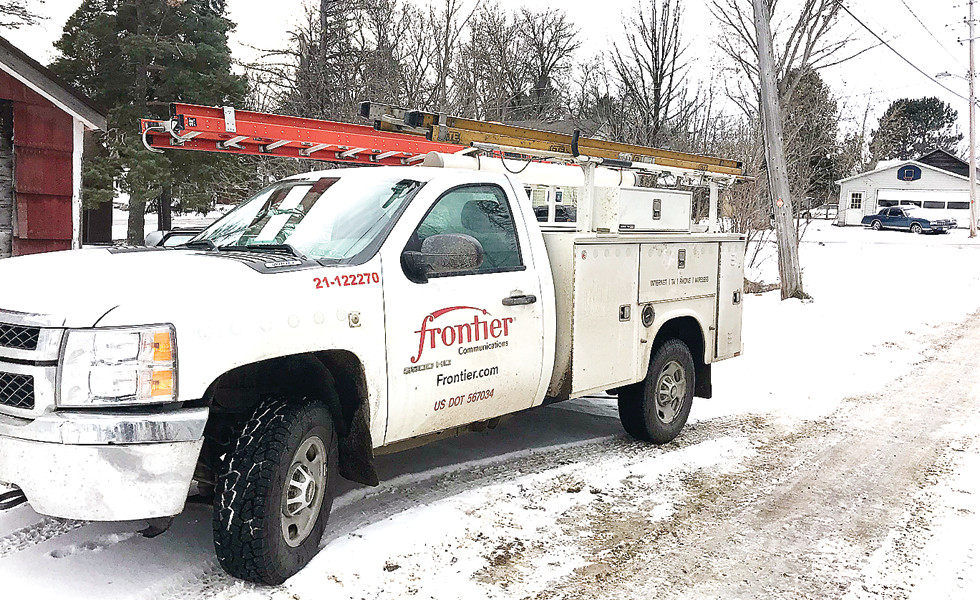 While local Frontier service people generally get high marks from customers, the company's overall service and its billing practices have angered many customers in the region.
M. Helmberger
Posted Tuesday, November 21, 2017 5:00 pm

REGIONAL— If you mention Frontier Communications to Steve Wilson, of Tower, you’d better have a comfortable chair— you could be there a while.

Wilson, who retired from the Department of Natural Resources five years ago, has waged an epic battle over the past nine months in an ultimately fruitless effort to obtain satisfaction from a company that he said consistently overcharged him for services he never received, denied him access to an email account and address he’d used for decades, and failed to provide even basic Internet service on a regular basis.

Wilson, who can be, well…persistent, figures he’s spent dozens of hours on the phone with the company, trying to correct his bills, without success.

When he finally refused to pay a four-dollar fee that he insists he doesn’t owe, the company attached a statement to the bottom of all his outgoing emails stating that he had an overdue account, something that the company isn’t allowed to do according to Anne Thom, supervisor in the Consumer Affairs Office for the Minnesota Public Utilities Commission.

For Wilson, that was the last straw. “I call them the Evil Empire now,” said Wilson, who has since dropped his Frontier Internet service and is exploring alternatives for phone service as well. He’s also filed a complaint with Minnesota Attorney General Lori Swanson. “We’re paying four times as much for Internet now. That’s just how desperate we were to be rid of Frontier. I’d rather be water-boarded than have to talk to them again.”

While most Frontier customers can’t recite the full litany of woe experienced by Wilson, for many residents of Frontier’s service territory here in northeastern Minnesota it sounds all too familiar.

“This has been the worst service experience of my life,” said Melissa Holmes, of Embarrass, who responded to a recent story in the Timberjay asking readers to send in their concerns about Frontier. That story prompted dozens of responses, all with similar stories of overcharges, long waits on hold for billing or technical assistance, and regular outages, some lasting for days.

Holmes said her phone service regularly goes out, particularly when conditions are wet. “My whole neighborhood here on Wahlsten Road in Embarrass has had service issues with Frontier for decades,” she said. “Repeated calls to the company go nowhere.”

Like Wilson, Holmes said her bill regularly goes up for no apparent reason. “Calling only frustrates me further because no one has a clue at Frontier as to what the problem is or why my bill went up five dollars.  Last month they billed my checking account twice.  I had to call and have them reverse the last charge, which then took days to be reimbursed.”

Nita Utterback, who lives in Eagles Nest Township, is employed by the Revenue Department in Ely, but tries to work from home whenever possible. Yet unreliable Internet service regularly prevents her from doing so. “When it goes out, I have to drive to the revenue office or take vacation time,” she said. “I pay for high speed Internet, but I don’t get it most of the time.”

Utterback has had 12 work orders filed with the company since mid-May and figures she’s filed at least 50 orders since she moved to her rural residence ten years ago. “All the technicians know me they’ve been here so many times.”

Utterback fears that the situation with Frontier is having an economic impact on the region, both by discouraging people able to telecommute from moving to the area and hurting small businesses that are increasingly reliant on reliable Internet for day-to-day business transactions.

Brenda Winkelaar, who operates SuLu’s Espresso Café in Tower with her sister Linda, can attest to that personally. She said the majority of their customers rely on credit or debit cards for the coffee and treats they buy. But completing those transactions is only possible when the Internet is working— and outages are all too frequent, said Winkelaar. “We lose significant business because of it,” she said, since more and more people don’t carry cash. Rather than turn away customers, they routinely just give things away or ask regular customers to pay next time.

While that might not be a disaster if the Internet outage is a matter of minutes, operations at SuLu’s were thrown into chaos in late September when their Internet disappeared for three full days.

To make matters worse, said Winkelaar, the company’s billing is notoriously inaccurate and hard to understand. “We never get the right bill,” she said.

State Rep. Rob Ecklund said he hears concerns about Frontier all the time. “Funny you should ask,” said Ecklund when he was contacted by the Timberjay earlier this month. “I just checked my voicemails from yesterday afternoon, and two of them were about problems with Frontier,” he said.

Ecklund contacted both state and company officials in the wake of the calls, and issued a press release (See sidebar) earlier this month informing residents of District 3A how to file a complaint with the Public Utilities Commission against the company.

The Timberjay posed several questions to Frontier for this story and provided the company the opportunity to respond.

The company, through a spokesperson, initially requested that publication of the story, originally set for Nov. 3, be postponed until the company could obtain more information about some of the specific complaints.

The Timberjay provided the company with more details on the nature of the complaints and held publication of the story for three weeks to ensure that Frontier had adequate time to fully respond.

As of presstime this week, however, Frontier has offered no response of any kind.

Prospects for an improvement in Frontier’s service quality appear unlikely given the increasingly tenuous financial condition of the company. Frontier went deeply in debt in early 2016, when it completed an $11 billion purchase of landline infrastructure formerly owned by Verizon in California, Texas, and Florida. The acquisition more than doubled the size of the company, but also prompted a major restructuring, which included significant layoffs.

Frontier officials had touted the acquisition at the time, arguing that the company knew how to make money from traditional landline infrastructure even as the industry is rapidly transitioning to wireless. But the company has yet to demonstrate it is up to the challenge and as complaints over poor service have mounted, the company has hemorrhaged customers, particularly in more populated regions, where customers often have viable alternatives.

According to the Los Angeles Times, Frontier lost 102,000 landline dependent customers in just the first quarter of 2017. The company lost $373 million last year and a whopping $737 million through the first half of 2017, much of it as the company writes off overdue bills from the customers it acquired in the Verizon acquisition. Earlier this year, the company announced that it was cutting its dividend by more than 60 percent and would engineer a 1-for-15 reverse stock split (exchanging one share for every 15 shares outstanding) in a move to boost its sagging stock price. It hasn’t helped, as the company’s share price has slid from a high of $56 at the beginning of the year, to just over $11 this week. The company’s slide prompted the S&P 500 to recently drop the company from its index.

Frontier executives are in a desperate bid to right the ship ahead of 2020, when much of the company’s current debt begins to come due. The company has more than $7.5 billion in debt payments scheduled from 2020-2022, according to financial analysts. With the company’s focus on cutting costs, it’s difficult to envision additional investments in a relatively small, rural market like northeastern Minnesota.

While most companies probably couldn’t get away with the questionable service that seems endemic to Frontier in northeastern Minnesota, for those who try to quit their service for an alternative, the costs can be high.

Shockingly high, in fact, as the folks at SuLu’s discovered when they tried to cancel their Frontier service. “They told us we were under contract and that it would be like $1,500 or $1,800 to get out of it,” said Brenda Winkelaar. “So we can’t get away until some time in 2018.”

And even for those determined to end their Frontier service, the process for doing so can be challenging— requiring business owners to contact the company on the very day that their contract expires. “They said we have to call on the same day or it’s automatically renewed for another two years,” said Winkelaar. “You have to be so aware of the fine print, or you can’t get away.”

Orlyn Kringstad, a Tower-based business owner, said Frontier customer service told him he’d have to pay $1,400 to get out of his contract with the company for his home as well as at his Main Street business, Nordic Home North and Tower Harbor Shores, which is developing the planned town home project at the Tower harbor. He said it was a constant $66 monthly charge for things he never ordered, along with Internet service that routinely cut out, that prompted him to make the change to Midcontinent, the local cable provider in town. Kringstad said after three months of poor service from Frontier, he doesn’t plan to pay their threatened fee. “And I’m not going to let them anywhere near the harbor project,” he said.

For rural residents, alternatives like Midcontinent aren’t available. While some have turned to satellite-based services, those can be significantly more costly and can have technical problems of their own.

Utterback, from Eagles Nest, said she’s looked into alternatives, but notes that there aren’t many good options. “They’ve got us by the neck and won’t let go,” she said.

“It’s so frustrating that I can’t tell them to turn it off, I’m done with you.”

While her frustration with the company as a whole runs high, Utterback said she doesn’t blame the local tech workers, who used to be overseen by local manager Terry Bosch. She believes they are sincerely trying to solve the problems being experienced by customers, but are working with a company that doesn’t provide the backup they need. “I think that Terry did an excellent job to make do with what he had.”

Many others share that view. “The local installer is a gem,” said Kringstad, despite his frustration with other aspects of the company’s service.

But for most, the local support simply can’t make up for the long list of complaints. And while alternatives aren’t always available, and can be significantly more expensive, for some, like Steve Wilson, it’s worth it. “I just want to be rid of them completely,” he said. “My dream is to never be on hold with Frontier again.”