ELY- The Timberwolves’ homecoming match-up with Cook Country proved a much-tighter contest than some recent outings, with the game decided only in the final minute. The outcome was the same as … 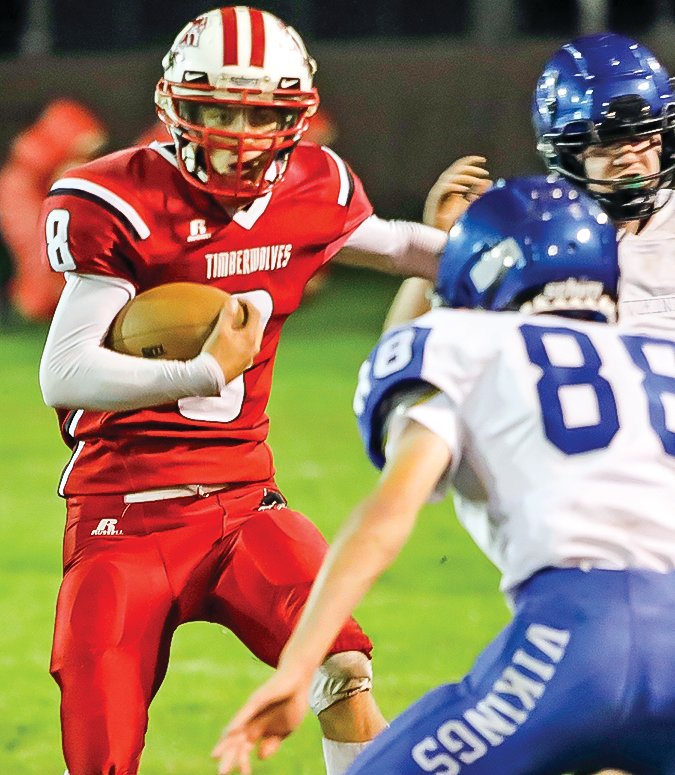 ELY- The Timberwolves’ homecoming match-up with Cook Country proved a much-tighter contest than some recent outings, with the game decided only in the final minute. The outcome was the same as in recent games, however, as Ely ultimately fell 14-8 to the Vikings to drop to 1-5 on the season.
Junior running back Jason Kerntz staked Ely to an 8-0 lead late in the first quarter off a long run and it was all the scoring that either side could muster well into the third quarter.
Cook County evened the contest on a 40-yard pass completion and conversion in the third quarter.
The Vikings went on to add another six points in the final stanza, but left Ely a little time on the clock. With less than two minutes to go, Ely appeared to be on the move, driving down the field to about the 40-yard line. But that’s all the further they would penetrate as Cook County picked off a Mason David pass on the next play, leaving just 37 seconds on the clock. The Vikings ran one play and Ely called a timeout to stop the clock. On the next play, as Cook County attempted to down the ball, they fumbled the snap, but recovered the ball. The Vikings tried to down the ball again on the next play and fumbled the snap again with Ely recovering, with just seconds on the clock. The Wolves had one chance to tie the score, but Davis’s long pass fell harmlessly downfield, ending Ely’s hopes of a comeback.
“It was an exciting end to the game,” Ely Head Coach Louis Gerzin said. “Right after the game, with Homecoming and everything, the guys were pretty disappointed. I thought we played a great game. The team showed a ton of spirit in battling back and not giving up. They gave themselves a chance to win. I was really pleased with their effort. They came back to practice on Monday ready to get to back to work.”
On defense, junior linebacker Jakson Hegman led the Timberwolves with 13 tackles for the night. “Jakson had a great game,” Gerzin said.
Senior Alec Cooke had seven tackles, while fellow senior Eddie Prijatel added six. Senior Gunnar Hart added five tackles and Mason Davis notched an interception.
Jason Kerntz was sidelined with a severe leg cramp early in the game but returned to rush for 82 yards. Harry Simons had 71 yards on the ground while Erron Anderson rushed for 66 yards.
Davis had a 40-yard pass completion to Chase Sandberg.
“I need to give big credit to our offensive and defensive lines,” Gerzin said. “They had a great effort in the trenches and played a really good game on both sides of the ball.”
The Timberwolves will host Hill City/Northland on Friday, Oct. 15. Game time is 6 p.m. They’ll finish the regular season on Wednesday, Oct. 20 against Kelliher/Northome.

Grizzlies coach: Chiabotti was an exceptional player from a young age