Latest DNR test-netting points to another strong season, with an abundance of “eaters”

LAKE VERMILION— The 2022 fishing opener is right around the corner, and on Lake Vermilion, the walleyes are waiting. Lots of them. That’s the upshot of the latest assessment of the …

Latest DNR test-netting points to another strong season, with an abundance of “eaters” 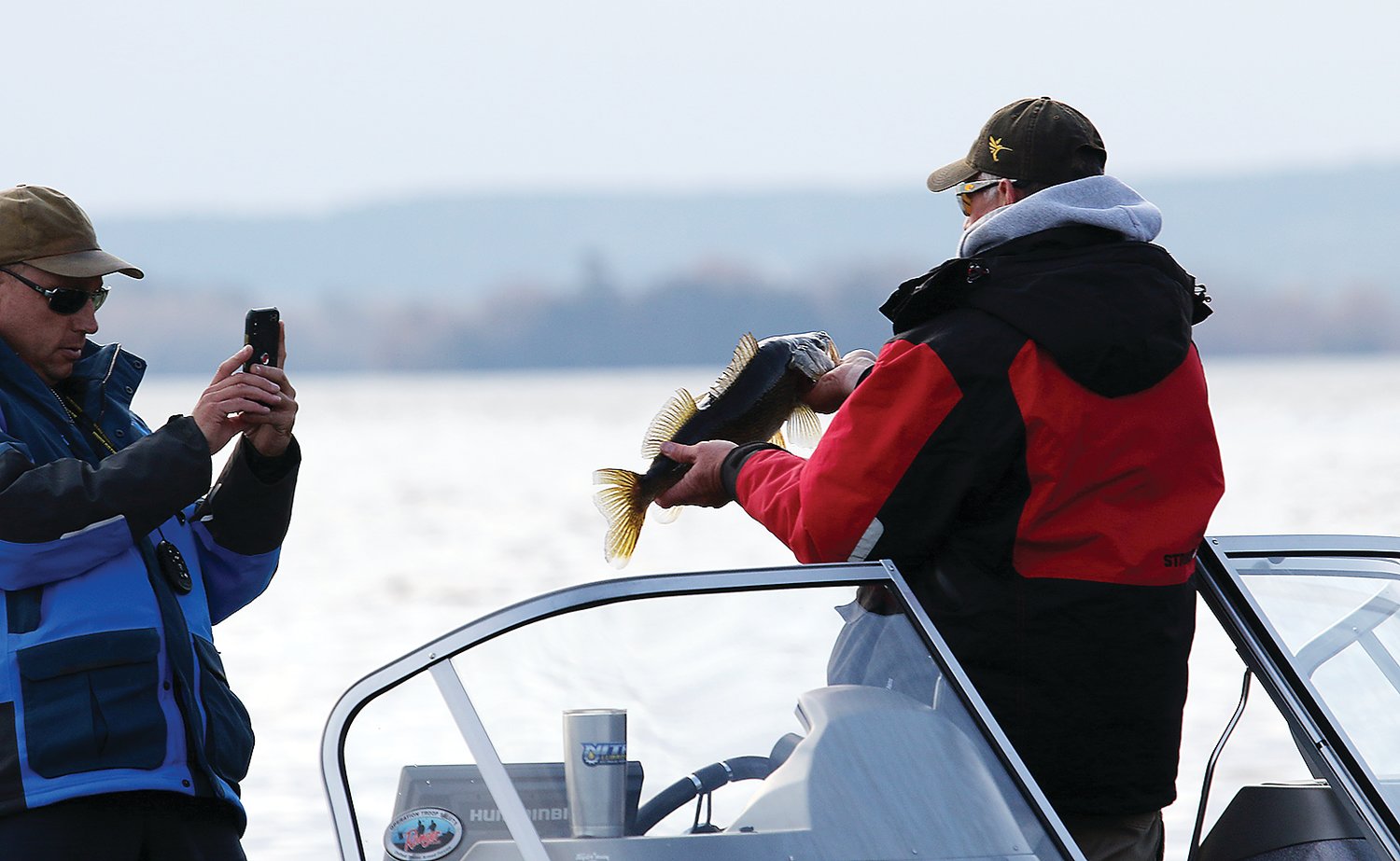 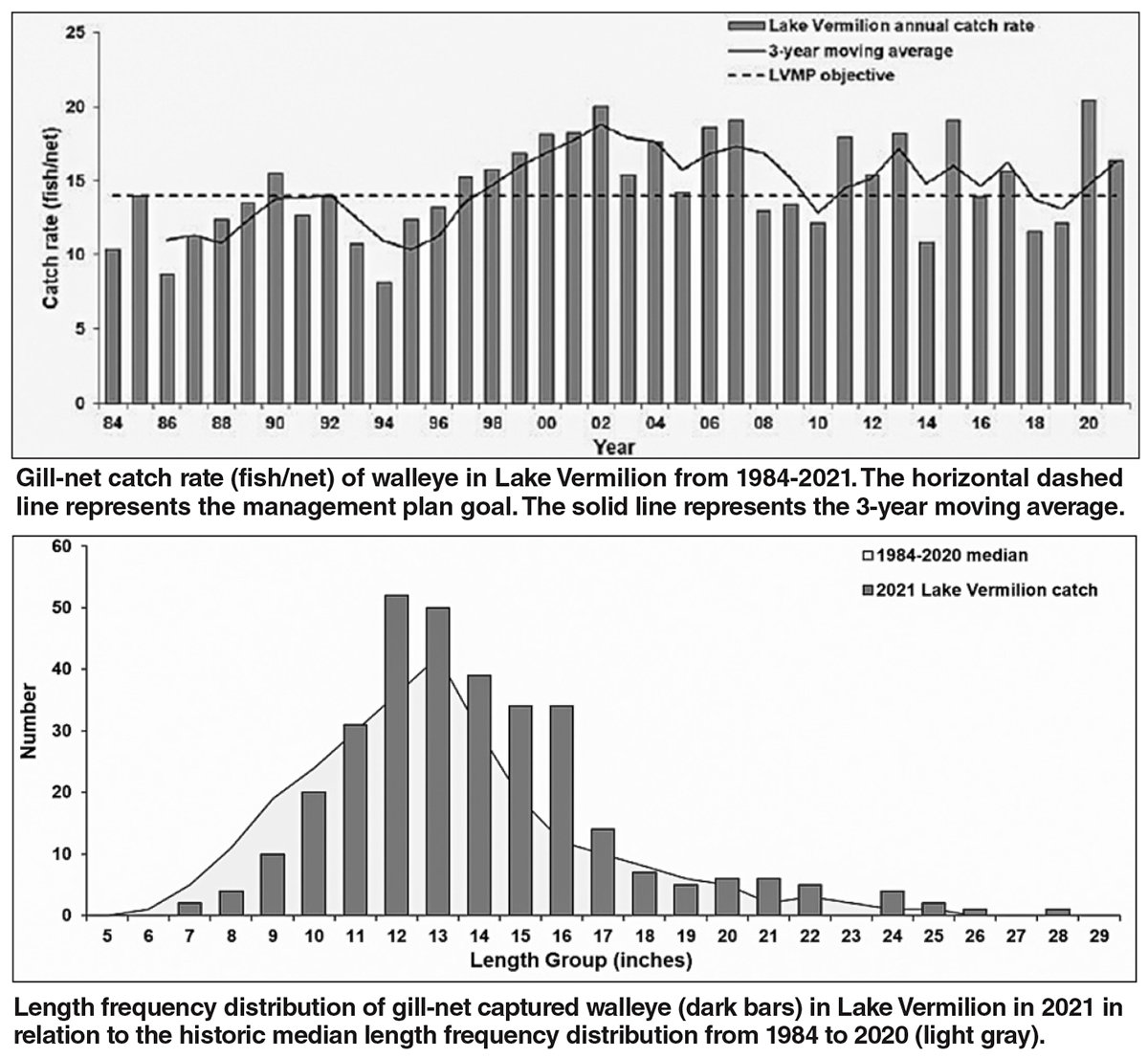 LAKE VERMILION— The 2022 fishing opener is right around the corner, and on Lake Vermilion, the walleyes are waiting. Lots of them.
That’s the upshot of the latest assessment of the Vermilion fishery, just released by the Department of Natural Resources. Test netting conducted on walleye, perch, and northern last fall by DNR fisheries staff found that walleye numbers on the sprawling lake remain well above the long-term average due to strong recruitment from several recent year-classes.
The top-line average number, of 16.4 walleye per net, is significantly above the lake’s long-term management objective of 14 walleye per net. Yet the size distribution of all those walleyes is perhaps the best news of all for anglers this summer, according to DNR large lake specialist Matt Hennen, who produces the report. He notes that fish between 11-17 inches predominated in the walleye catch. “Also, the catch rate of fish from the range anglers prefer to keep, from 13 to 20 inches, was notably high,” Hennen said. Those fish are all below the current protected slot of 20-26 inches and are within the range most preferred by anglers for the frying pan.
“These fish should provide ample catch and harvest opportunities in 2022,” wrote Hennen in his report. “Also, an abundance of walleyes over 20 inches will continue to provide memorable catch opportunities throughout the lake while also ensuring plenty of spawners for future generations.”
The good news for walleye anglers extends across the lake, as the latest results reflect strong improvement in walleye numbers on the lake’s western basin, where a limited number of eating-sized walleye in some recent years had frustrated fishing guides, resort owners, and anglers.
The walleye numbers were slightly higher in the eastern basin, with an average of 16.8 walleye per net. Yet the catch rate on the western basin wasn’t far behind, at an average of 15.8 walleye per net. That was the third highest catch rate on record on the western basin and it comes on the heels of last year’s catch rate of 16.0 walleye per net, which further confirms the strong walleye numbers on the lake’s west end. “The consecutive years of high catches in West Vermilion is the result of an exceptionally strong 2018 year-class driving recruitment especially in that basin,” wrote Hennen in his report. That year class should continue to yield big returns for Vermilion anglers and preliminary estimates suggest the 2019-year class is above average as well, so the good fishing is likely to continue.
What’s more, last fall’s electrofishing assessment, which looks at young-of-the-year success, found that numbers are above average and that the young walleyes were considerably larger than average, which typically improves their winter survival.
“Based on the catch rates and size of fish captured, the 2021 year-class is likely to be moderate to strong,” concludes Hennen.
Yellow perch
Last fall’s test netting averaged 31.5 perch per net, or somewhat above the long-term average. At the same time, fisheries staff continued to find significant differences between the eastern and western basin.
“The 2021 East Vermilion catch rate of 15.3 fish/net was nearly identical to 2020 (15.6 fish/net) and fell well below average for that basin,” wrote Hennen in his report. “This marks the sixth time in the last seven years and the 12th time in the last 15 years that the catch rate has been below historical averages. Overall, East Vermilion yellow perch gill net catch rates have displayed a decreasing trend since the early 1990s which is likely due to a combination of several factors.”
By contrast, the perch count on the lake’s west end was a phenomenal 55.8 fish per net, the highest ever observed there, a continuance of a trend of very high perch numbers on the west end in recent years. While perch are primarily a forage species for larger game fish, anglers regularly harvest larger perch, which are excellent eating, similar to walleye.
At the same time, the number of perch nine inches or larger, which is the size most anglers prefer, has been trending downward in recent years and was below the historical average on the lake during last fall’s assessment. Hennen reported that the data suggest a shift in the size structure of perch on the lake.
Northern pike
The DNR reported a total of ten northern pike caught in gill nets during the fall assessment, a low number that continues a declining lakewide trend over the past three decades. The size structure, however, has shifted toward larger fish, which may be partially attributable to the protected slot limit that’s been in place on Vermilion since 2003.
The 2022 fishing opener is set for Saturday, May 14.