REGIONAL— The tiny spruce budworm caterpillar may appear insignificant, but its recent impact on northeastern Minnesota’s forests is anything but, according to the Department of Natural … 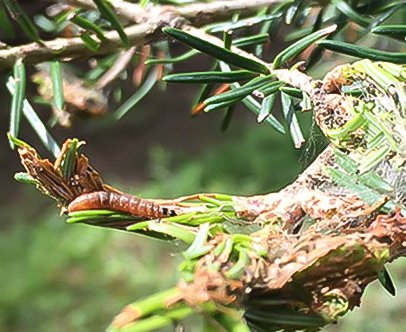 REGIONAL— The tiny spruce budworm caterpillar may appear insignificant, but its recent impact on northeastern Minnesota’s forests is anything but, according to the Department of Natural Resources.
Since 2018, the native caterpillar has defoliated or destroyed about 282,000 acres of spruce and fir forests in the region. Data on spruce budworm damage is collected each year by aerial surveys that map large-scale disturbances across Minnesota.
The majority of the present outbreak is in Lake County and the western part of Cook County. In this year alone, spruce budworm defoliated and killed 384,000 acres of fir and spruce. Most (roughly 303,000) of those acres were defoliated, and about 81,000 acres had a mix of mortality and defoliation. This is the highest number of acres the caterpillar has impacted since 1995, when it damaged 506,000 acres in one year.
The past few years of dry weather, particularly in the spring and early summer, may have magnified the spruce budworm situation. Scientists hypothesize that warm, dry weather increases the survival of budworm larvae. Insect diseases such as fungal pathogens need cool and moist conditions to thrive, so fewer budworm larvae are attacked when the weather is warm and dry. These natural enemies normally help keep the budworm population at lower levels.
Not only were large numbers of trees damaged or killed, the drought, coupled with spruce budworm damage, possibly played a role in Minnesota’s fire season.
The largest fire in 2021 was the Greenwood Fire, burning about 27,000 acres. The fire was near Isabella, in the heart of the budworm outbreak. Dying trees and standing, recently dead, trees with needles are fuel through which fire can more easily burn than if trees are healthy or on the ground and decaying. It seems probable that these conditions caused by spruce budworm altered the behavior of the Greenwood Fire.
Managing spruce budworm can be tricky once defoliation has started. Landowners can work with a DNR forester on a stewardship plan or work with their local Soil and Water Conservation District if their forests have a significant number of trees killed by spruce budworm.
Homeowners interested in saving their trees can also promote tree vigor with watering and mulching or using an insecticide such as Btk, if practical.

A peek at the pecking order

Time to count the birds