Road crews idled as they wait for spring weather

REGIONAL— A seemingly never-ending series of snowfalls in April has left county roads across the region in the worst condition in recent memory, and St. Louis County public works officials say …

Road crews idled as they wait for spring weather 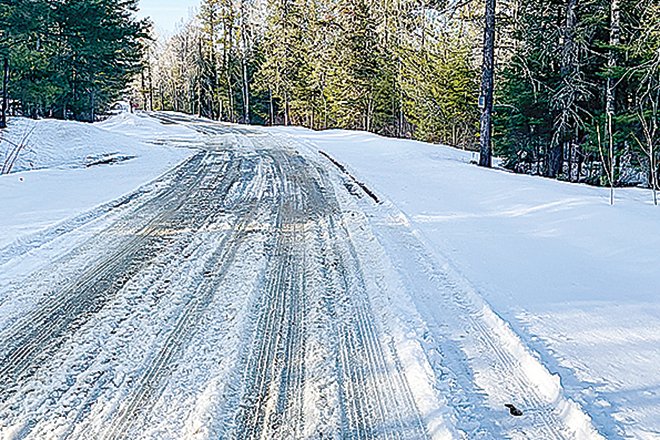 Some 1,500 miles of gravel roads in St. Louis County, including this one near Tower, are in bad shape this spring as a prolonged winter is preventing road crews from working on them.
M. Helmberger
Posted Wednesday, April 20, 2022 8:18 pm

REGIONAL— A seemingly never-ending series of snowfalls in April has left county roads across the region in the worst condition in recent memory, and St. Louis County public works officials say there’s little they can do about the situation other than wait.
With 1,500 miles of gravel roads, which provide home access to thousands of county residents, the current conditions haven’t gone unnoticed, acknowledged Brian Boder, with the county public works office in Pike Lake. County officials admit the roads are bad. “It’s miserable,” admits Boder, who said county officials have been trying to get the word out about the situation so people understand.
It appears the brief warm-up in late March is part of the problem. Several days of spring-like weather thawed road surfaces and prompted the posting of load limits for gravel roads across the county. That’s prevented county road crews from either snowplowing or grading as the combination of freezing and thawing, along with at least half a dozen moderate snowfalls so far this month, have left gravel roads frequently snow-covered, with either frozen ruts or a muddy mess, depending on the day.
“When road restrictions hit, gravel roads are automatically a five-ton posting,” said Boder. County plow trucks run 45,000-50,000 pounds unloaded and tip the scales at 70,000 pounds with a load of salt and gravel. “For us to go out under the current conditions would do more damage than we could ever justify,” he added.
The county plow trucks don’t have the fine blade control of most smaller plows, designed for pickups, which means they require a hard, frozen surface to prevent road damage. Once the top layer of the gravel roads begins to thaw, plowing becomes difficult, notes Boder. “We’d be plowing a lot of gravel into the ditches,” he said.
While the county does have underbody plows that it can deploy in the event of a major snowfall, he said it hasn’t been worth the mess it would create given that most of recent snows have been in the three-to-five inch range, which is generally passable for most vehicles.
The abundance of potholes right now isn’t unusual in the late winter or early spring, but the frequency of precipitation this month has made it almost impossible for the county to address the issue. “We can’t grade under these conditions,” said Boder. “We’d just make mud.”
Bringing in more material isn’t an option either, notes Boder, because any fresh gravel would only add to the muddy conditions.
For now, said Boder, residents along gravel roads should keep their fingers crossed for a change in the weather pattern, in favor of warmer and drier conditions. “If we were to have a string of five days of dry weather, we might try to get out there and take care of some of the worst of the worst,” he said.
Meanwhile, the weather forecast offers little in the way of relief. On top of Monday’s and Wednesday’s snowfalls, the forecast is calling for rain on Saturday, with colder weather and on and off chances of rain or snow next week.