REGIONAL— The region’s ruffed grouse population is in the declining phase of its roughly ten-year cycle. But someone forgot to tell the grouse. For over 70 years, the cyclical ups and … 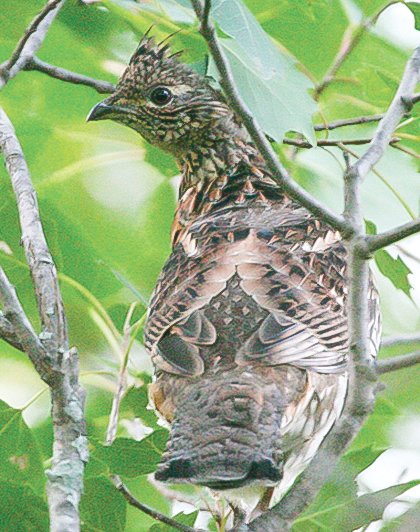 Ruffed grouse numbers may be up this fall, even though the population is supposed to be in the declining phase of its ten-year cycle.
M. Helmberger
Posted Wednesday, August 10, 2022 6:20 pm

REGIONAL— The region’s ruffed grouse population is in the declining phase of its roughly ten-year cycle. But someone forgot to tell the grouse.
For over 70 years, the cyclical ups and downs of the ruffed grouse population have been nearly as reliable as clockwork, yet that reliability has waned a bit in recent years, no more so than this year. It may be perplexing to biologists, but it’s good news for hunters who can anticipate better-than-expected opportunity when the grouse season gets underway on Sept. 17.
The hopeful news is based on spring drumming counts, which averaged 2.0 drums per stop in the northeast this year. That’s encouraging, but not definitive, notes Charlotte Roy, the Department of Natural Resources’ grouse project leader. “While ruffed grouse drumming counts are up, they are not a reliable way to predict the fall hunting season,” she notes.
Historically, spring drumming counts have been a good indicator of fall grouse populations, however that correlation has been less reliable in recent years. In the past, a spring drumming count of 2.0 would have indicated good prospects for the fall hunt.
The DNR and its partners use spring drumming counts to help monitor the ruffed grouse breeding population through time. Drumming is a low sound produced by males as they beat their wings rapidly and in increasing frequency to signal the location of their territory. Drumming displays also attract females that are ready to begin nesting. Ruffed grouse populations are surveyed by counting the number of male ruffed grouse heard drumming on established routes throughout the state’s forested regions.
According to the DNR, unexpectedly high ruffed grouse counts this year may have resulted from the warm temperatures and dry conditions last year during May and June, which favors high nest success and chick survival. Snow conditions also were favorable during winter for roosting throughout much of the core of grouse range.
The number of birds present during the fall hunting season also depends upon nesting success and chick survival during the spring and summer. Nesting success and chick survival are influenced by many factors, including weather during May and June, which has been more extreme in recent years, and other factors, including disease and predators. In May this year, heavy rainfall and flooding affected much of the core of ruffed grouse range.
In northern St. Louis County, however, the first three weeks of June, which is often a critical time for grouse nestling success, was warmer and much drier than average. Anecdotal reports from the area suggest that nesting success was reasonably good, with numerous reports of sizable coveys of young grouse.

I can see fall from the island