TEDA board OKs plan for 12 townhomes on two parcels

TOWER— A development project mired in delay for the past several years has new life and a new development agreement, this time with the Tower Economic Development Authority. The Tower Harbor …

TEDA board OKs plan for 12 townhomes on two parcels 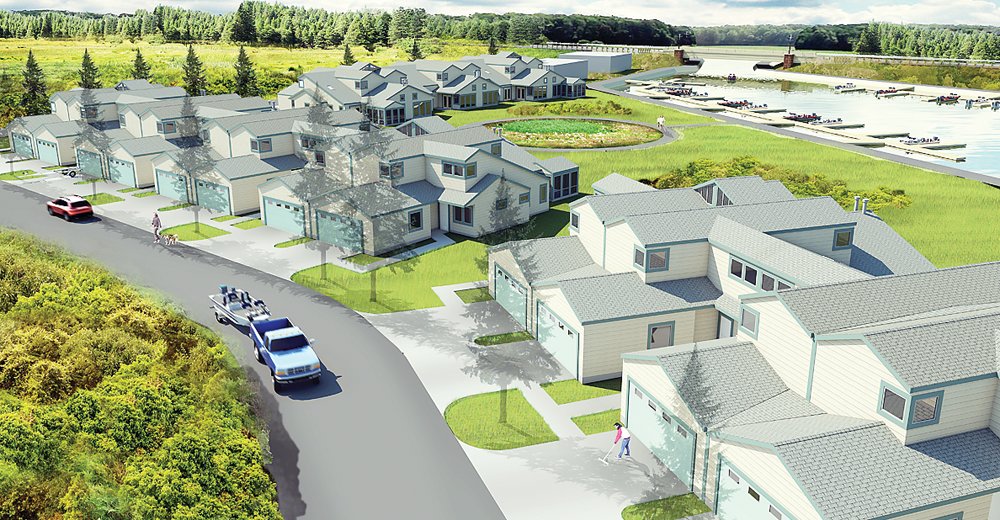 TOWER— A development project mired in delay for the past several years has new life and a new development agreement, this time with the Tower Economic Development Authority.
The Tower Harbor Shores condominium plan appears to be back on track after the TEDA board unanimously approved a modified agreement with the company to build 12 townhomes on two parcels along the city’s harbor.
That’s fewer than the 20 townhomes that the company originally proposed to build on three parcels on the harbor, but the TEDA board wants to explore an alternative plan for the remaining parcel, most likely a mix of commercial and residential development along with public space for small events.
The townhome development wasn’t approved without considerable discussion, as some on the board preferred looking at other options for the site. In the end, however, uncertainty around the enforceability of a 2018 development agreement between the city of Tower and Tower Harbor Shores, prompted TEDA to ink the revised deal. The Tower City Council, back in March, assigned its responsibilities under the 2018 agreement to TEDA.
The original development agreement, first signed in 2016, then updated two years later, proved problematic in part because the city of Tower did not own the property it promised to convey to the developers. The city had conveyed the land to TEDA several years before signing the agreement with Tower Harbor Shores. In the end, the two original development agreements were never enforced by either party and deadlines for actions by both parties went by without either side taking action.
The development remained stalled for years as legacy interests in some of the property around the harbor had to be addressed to complete a new plat, which was required in order to legally sell the townhomes.
Under the newly-modified development agreement, Tower Harbor Shores has until June 1 of next year to provide a notice of intent to proceed with the first six townhomes. Construction will need to begin by August 1.
Project manager Jeremy Schoenfelder has hinted that a potential buyer may be interested in purchasing the entire first block of six townhomes as investment property, which would potentially become short-term rental units.
TEDA president Steve Peterson said the new agreement rekindles hope that the long-delayed project can finally move forward. That would not only bring significant new development to Tower, but would also make it possible for Tower Harbor Shores to repay some or all of the $119,000 it still owes TEDA for a loan issued in 2017 to help fill an early funding gap in the project.
Much of the infrastructure, including sewer and water, for the first six townhomes was installed as part of the Pine Street reconstruction. The first six town homes would have driveways directly accessing the newly built street, while the second block of six would require further extension of utilities and a road stub installed as part of the Pine Street project. Funding for that second phase of infrastructure has not yet been identified.