REGIONAL— There were hopeful signs in the Department of Natural Resource’s latest aerial moose survey, results of which were released on Monday. The survey, which was canceled in 2021 due … 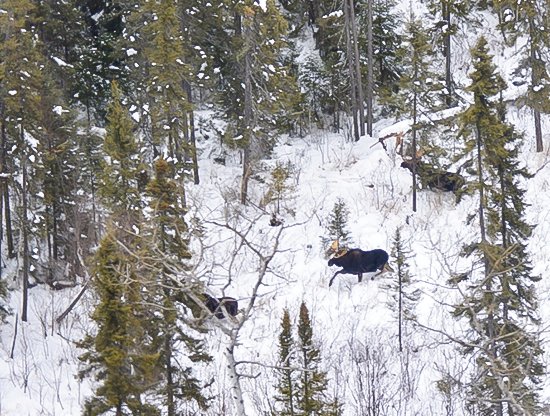 REGIONAL— There were hopeful signs in the Department of Natural Resource’s latest aerial moose survey, results of which were released on Monday. The survey, which was canceled in 2021 due to COVID-19, showed an increase in the population estimate, and a strong calf-to-cow ratio that suggests the population could be improving its reproductive success.
DNR officials note that the latest population estimate of 4,700 animals in the region’s primary moose zonen does not represent a statistically significant change from the 2020 population estimate of 3,150 animals. However, the 2022 estimate is the highest since 2011 and, at a minimum, it points to continued population stability in the population, if not modest growth.
The calf-to-cow ratio was the most hopeful sign in the study, showing an average of 0.45 calves per female, the highest ratio since 2005, when the region’s moose population was estimated at 8,160 animals and was considered healthy. In the most recent survey, conducted from Jan. 6-14, moose calves made up 19 percent of the total population, also the highest since 2005.
In total, researchers observed 373 moose during their survey of 53 plots and found moose on 75 percent of the plots flown.
The region’s moose population has been under intense scrutiny since an apparent population crash beginning in 2010. By 2013, the DNR’s aerial survey pegged the region’s moose population at an anemic 2,760 animals, a finding which prompted at least a temporary end to the state’s moose hunting season. That estimate now appears to have been an outlier, although subsequent surveys confirmed that the region’s moose population has declined from its peaks in the 2000s.
The 2022 survey results represent the 11th year in a row that suggest population stability, albeit at a lower population level than was once found in the region.
Both the Fond du Lac Band of Lake Superior Chippewa and the 1854 Treaty Authority contributed funding and personnel for the 2022 annual survey. The survey is available on the DNR’s moose management page (mndnr.gov/moose).