Lots of ice remains two weeks ‘til the big day

REGIONAL— With the Minnesota fishing opener now just over two weeks away, anglers hoping to ply any of the larger North Country lakes might want to pack their ice auger just to be safe. At …

Lots of ice remains two weeks ‘til the big day 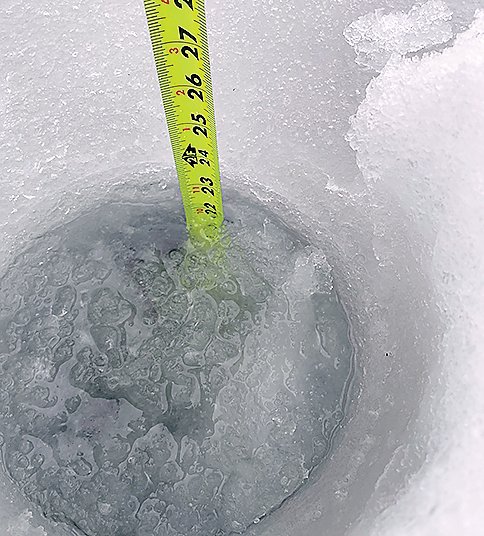 REGIONAL— With the Minnesota fishing opener now just over two weeks away, anglers hoping to ply any of the larger North Country lakes might want to pack their ice auger just to be safe.
At least two feet of ice was still covering Lake Vermilion as of this week and with continued cool weather in the forecast, the prospect of ice-out in time for opener is increasingly in question.
Low temperatures in the teens earlier in the week didn’t help matters, either.
Warm temperatures and sunshine are the two biggest contributors to ice-out, although wind can play a role once the ice begins to weaken. Yet, since the first of the month, area reporting stations are running around 4-6 degrees below average. And the North Country has experienced considerably less sunshine this month than normal, according to state climatologist Pete Boulay. “It’s worth complaining about, but it’s not record setting,” noted Boulay.
While high water from recent rains and snowmelt have weakened river ice in many cases, there was little sign of weakening ice on area lakes. As of Monday, April 25, there were still 24 inches of solid ice just off Hoodoo Point on Lake Vermilion’s Pike Bay, and likely much more ice further out on Big Bay. Vermilion’s average ice-out date is April 30, but after nights in the teens this week and daytime highs in the 30s and 40s, it’s clear the lake won’t be ice-free, or even close to it, by then.
Other lakes are reporting thick ice cover as well. Susan Melgeorge reported 36 inches of ice on Elephant Lake this week and expects the lake won’t be ice-free until May 15.
It wouldn’t be the first time that area lakes were iced over for fishing opener— not by a long shot. Most recently, ice has lingered on parts of Lake Vermilion and other large lakes for fishing opener in 2014, 2013, and 2008.
The slow progress toward open water has fisheries staff at the DNR’s Pike River Hatchery in a holding pattern. Tower area fisheries manager Keith Reeves, who took over from Edie Evarts in November, said the fish trap remained iced-in as of early this week. At this point, he said he hopes to start operations at the hatchery as of May 2, which would be the second latest start there on record. In 2018, after another cold April, hatchery operations got underway on May 3.
If the past is any guide, this year’s late start could mean egg-stripping operations will wind up quickly. And with a quota of only 486 quarts this year, Reeves said the crew might wrap up their work in just 2-3 days.
Meanwhile, the weather forecast offers little hope for the kind of dramatic improvement that could start eating away at the existing ice cover. The 6-10 day outlook calls for continued below normal temperatures, with highs mostly in the 40s and lows around freezing, with at least some peaks of sunshine.