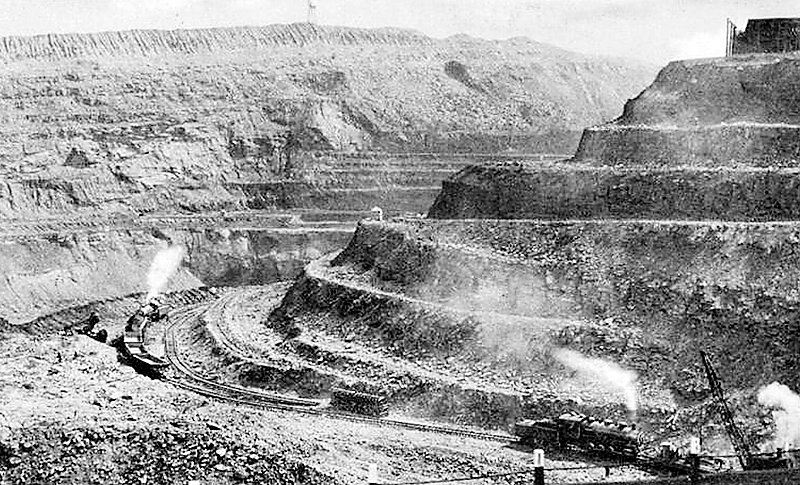 It is going to take another 20 years, so I have to live a long time.”
Pam Brunfelt

ELY – Iron Range ore is long credited with making the United States’ victory in World War II possible, and that’s a piece of history that local historian Pam Brunfelt is working hard to bring to life.
Brunfelt, who retired from a teaching position at Vermilion Community College last May, has been devoting almost all of her time to her research. “It is going to take another 20 years, so I have to live a long time,” she told a gathering at a recent Tuesday Group. “I have embarked on something that is probably logistically impossible for one person to try to do.”
Brunfelt is attempting to tell the story of iron and steel in World War II, a conflict that took place in nearly every corner of the earth from 1939 to 1945. “It is going to involve lots of travel that I haven’t even begun. I have been reading tons of books on World War II,” she said.
There are two factors in why the United States and its allies won World War II, according to Brunfelt. “One was obviously the bravery of the young men who fought in spite of the incompetence of their leaders,” she said. “The second (factor) is that they could not have won if it had not been for all the material, made of steel, that we provided. This number one factor in our victory has never been written about.”
Brunfelt jokingly said that all that steel needed for the ships, tanks, airplanes, weapons and bullets “just appeared magically,” and the Iron Range has never received any recognition for what was done. “We should be getting massive amounts of credit,” she said.
“I discovered this story about six years before I retired when I was on sabbatical reading Skillings Mining Review (founded in Duluth in 1912),” she said. “I kept finding these little tidbits that we produced 8,000 tanks, and millions of rounds of ammunition, and it was all made out of steel. I kept wondering why I don’t know any of this. I grew up here. I should know that.”
Through those random little lines in Skillings, Brunfelt got intrigued and wanted to know more. “I have spent all my time since then doing nothing but research on iron and steel in World War II. I am completely obsessed. I have no time for anything else. I go into my office in the morning and work for six or seven hours, then I read for another two or three hours, and then I go to bed. That’s my life for the next 20 years and I wouldn’t trade it for anything,” she said.
Brunfelt is realistic in her chances for completing this project. “I’m hoping I can provide enough research for somebody else to finish it,” she said.

An amazing story
Steel production in World War II and mining of the iron ore needed, has been overlooked by historians. “At one time, the world did know about us,” Brunfelt said of northern Minnesota. “Russian leader Josef Stalin, at the Yalta Conference in 1944, said the victory could be credited to the production of steel, without which the war would have been lost. Never doubt that that statement is absolutely true.”
According to Brunfelt, the war materiel produced in the U.S. during the war included:
• 5,000 merchant vessels.
• 79,125 landing craft.
• 300,000 warplanes,
• 41 million rounds of ammunition.
• 434 million tons of steel.
• 126,839 gun carriages and armored cars.
• 2.4 million military trucks.
• 2.6 million machine guns.
“And that is just a partial list. This was all done because of what was in the ground here in northeastern Minnesota,” Brunfelt added. “As many as 17 states produced iron ore during the war years, and Minnesota outperformed them all by a mile.”
According to Brunfelt’s research, Minnesota produced 70 percent of all the iron ore that was used in World War II. The next highest state, Michigan, produced 15 percent, and the other 15 states produced the other 15 percent of iron ore. “What would have happened to us in this country if we didn’t have Minnesota’s iron ore to provide all of the material that was used in the war?”
“More than 329 million tons of iron ore went to the steel mills from here,” she said. She added that oil, the single most important commodity in World War II, was moved to the coast through pipes made of steel and the steel was made from iron ore.
“Not many people know this, but we bankrupted the iron ore industry here during World War II,” Brunfelt said. ‘Natural ore was virtually gone by the end of the war. That’s why we ended up producing taconite. There was no natural ore left. We sacrificed in two ways, we sent our men off to the war and sacrificed the iron ore here.”
The ratio of iron ore to steel is almost exactly one-to-one, according to Brunfelt. “Steel consists of one ton of iron, plus four tons of coal and a half-ton of limestone,” she said. “They shipped the ore east to where the coal was located.”
From 1901 to 1946, almost two billion tons of iron ore was mined out of northeastern Minnesota, she said. “Hardly anybody knows how much iron ore is left in the ground here. It is too expensive to remove. Once they shifted to taconite, there was no way they were going to mine natural ore the old way. That’s why mining shut down here.”
Brunfelt also covered the United States Lend Lease program where military equipment was made available to the allies prior to the U.S. entering the war after the attack on Pearl Harbor in late 1941. “We provided 33,000 airplanes to the U.S.S.R. and 10,000 planes to Great Britain,” she said. “The number one vehicle we provided to the Russians was the Dodge half-ton truck. They brought most of the Soviet Army out of Russia in 455,000 of those vehicles. And they loved our Jeeps.”
“I love these statistics,” she said. “In 1944 the United States Steel Corporation produced enough steel every hour to make 705 fighter planes. If that doesn’t knock your socks off, you’re not alive. They produced 90 percent of the 21 million steel helmets that the soldiers used. U.S. Steel made 31 million kegs of nails!”
In short, said Brunfelt, concluding her presentation: “I would argue that the real arsenal of democracy was the men who worked in the mines here in Minnesota.”