ORR-An entire row of eight fuel pumps at Pelican Bay Foods in Orr was severely damaged on Friday in a freak accident involving a loaded logging trailer, forcing a temporary shutdown of fueling … 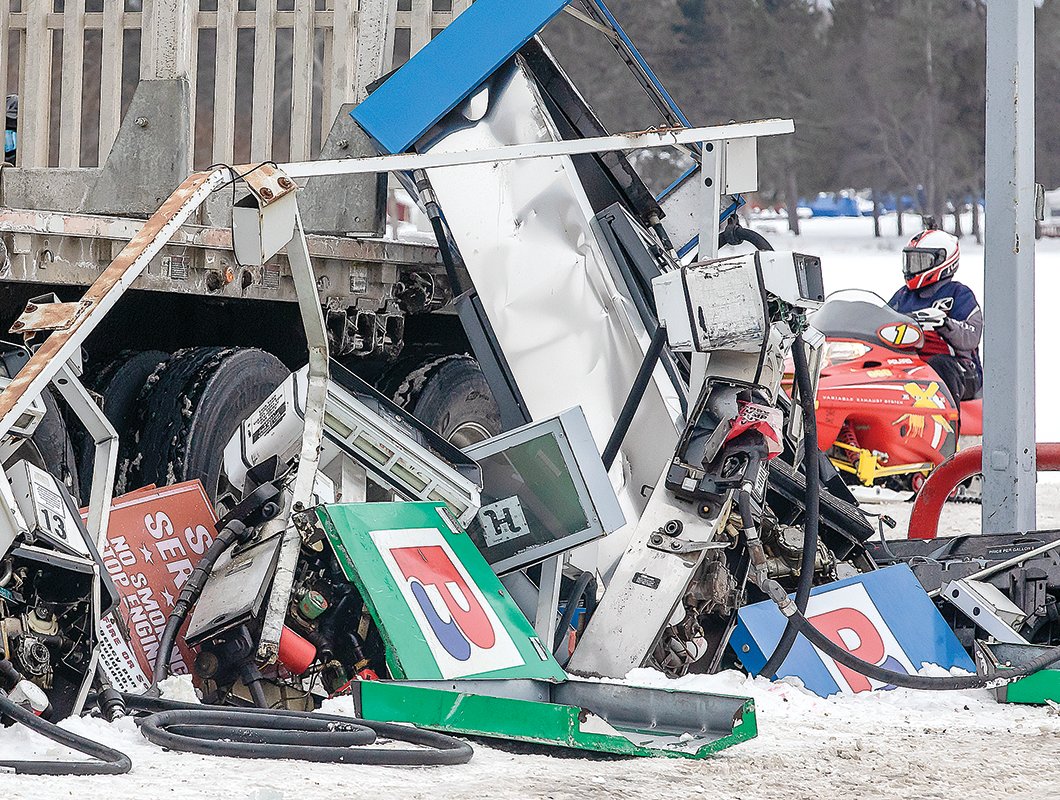 A snowmobile surveys the damage at the fuel pumps at Pelican Bay Foods in Orr last Friday after a logging truck wiped out a line of gas pumps.
D. Colburn

Damage to pumps knocked over by a logging tractor-trailer loaded with full-length timbers ranged from light to total loss.
D. Colburn 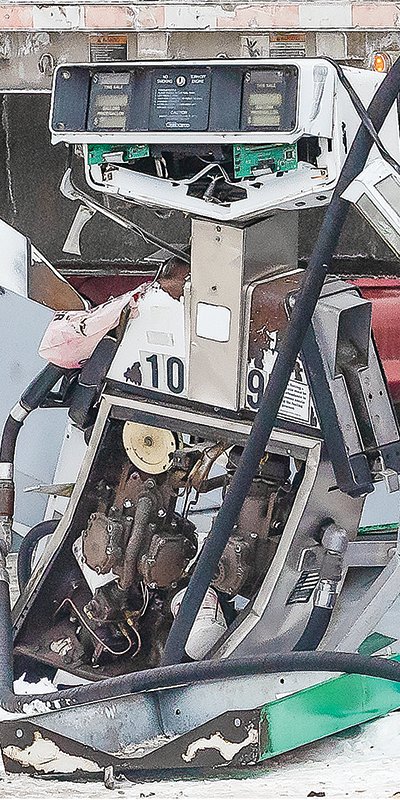 ORR-An entire row of eight fuel pumps at Pelican Bay Foods in Orr was severely damaged on Friday in a freak accident involving a loaded logging trailer, forcing a temporary shutdown of fueling operations here.
A logging tractor-trailer loaded with tree-length logs that extended well beyond the end of the trailer turned off Hwy. 53 at about 1:30 p.m. and pulled up along the north side of the uncovered fueling island farthest from the store. Big rigs in that position typically turn left onto Johnson Parkway and follow it behind Pelican Bay Foods and back to the highway.
However, according to reports at the scene and store surveillance video viewed by St. Louis County Sheriff’s deputies, the logging rig’s driver instead turned right to go behind the RE/MAX Lake Country office and T Pattenn Café. As the trailer pivoted, the timbers extending beyond the end of the trailer began striking the pumps, inflicting greater and greater damage down the row as the turn progressed. The three pumps closest to the highway appeared to have suffered light damage, while the remaining five pumps were demolished by the timbers.
According to the sheriff deputy’s report, the truck continued northbound on Hwy. 53 and was stopped a few miles north of Orr by the Minnesota State Patrol. The driver indicated that he was unaware that he’d struck anything.
Shortly after the incident occurred, Orr firefighters arrived on scene to assess the situation for potential hazards from possible fuel spillage. Yet it appears that an automatic internal shutoff system installed in the refueling system worked as designed, preventing any gas from leaking as a result of damage.
Fueling services were suspended at the store and repair work began later that afternoon. By Saturday morning, a limited number of pumps were back in operation.
As of Friday, the incident was classified as an accident and no charges were filed against the driver. The incident remains under investigation by the St. Louis County Sheriff’s Office.