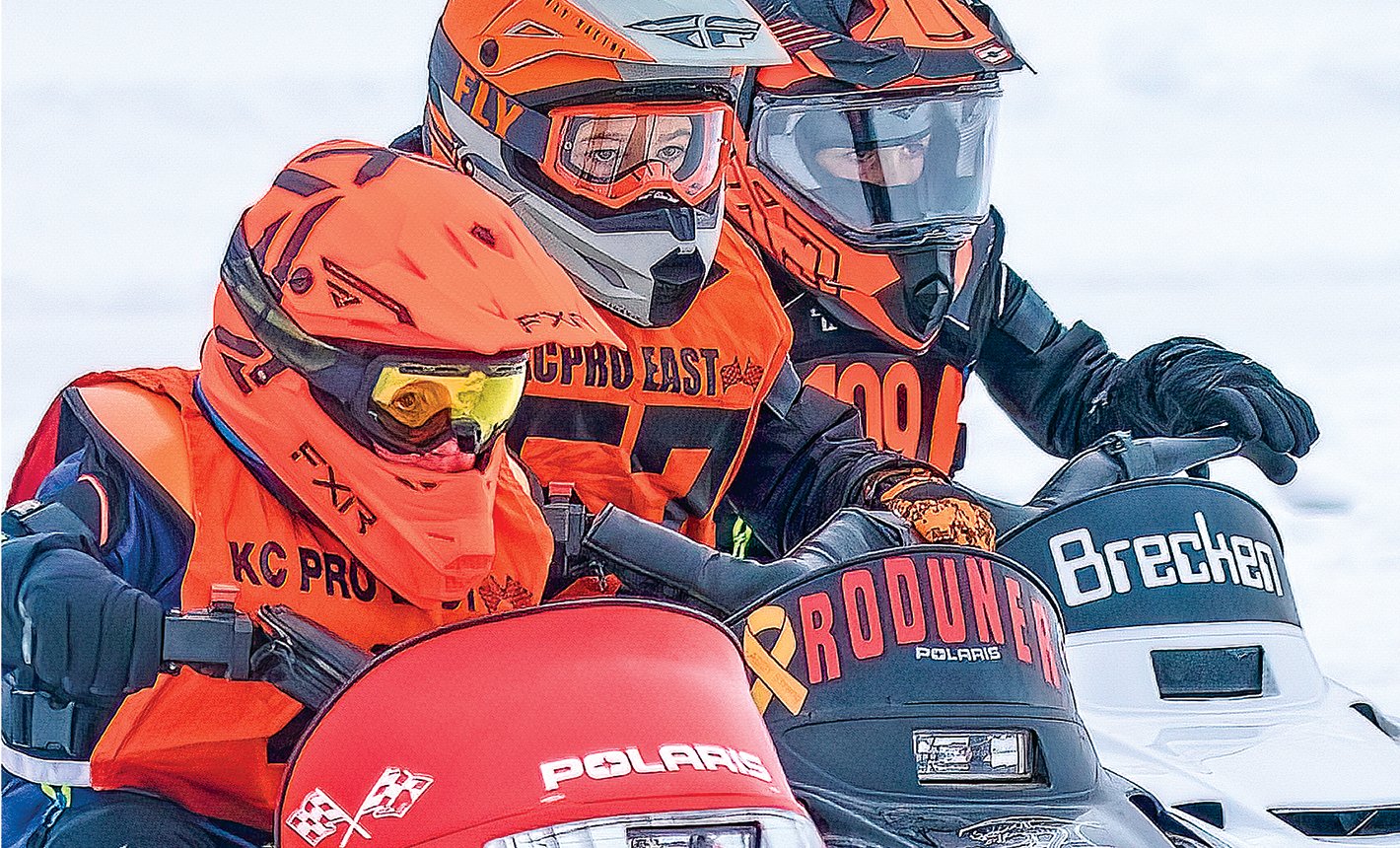 KCPRO East racers, from left, Maximus Haggland, Brock Roduner, and Brecken Cornelius vie for position at the start of a race.
D. Colburn 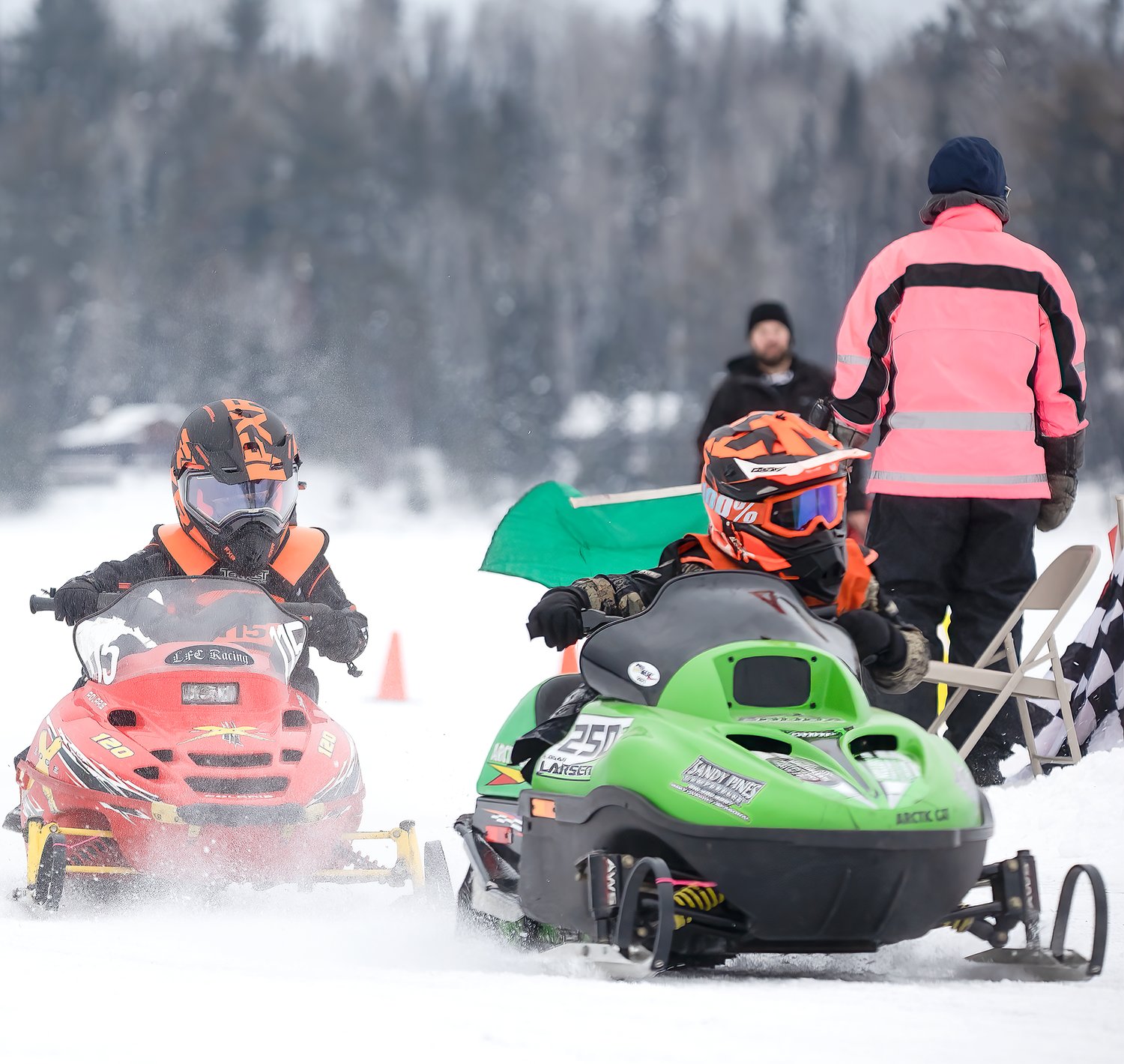 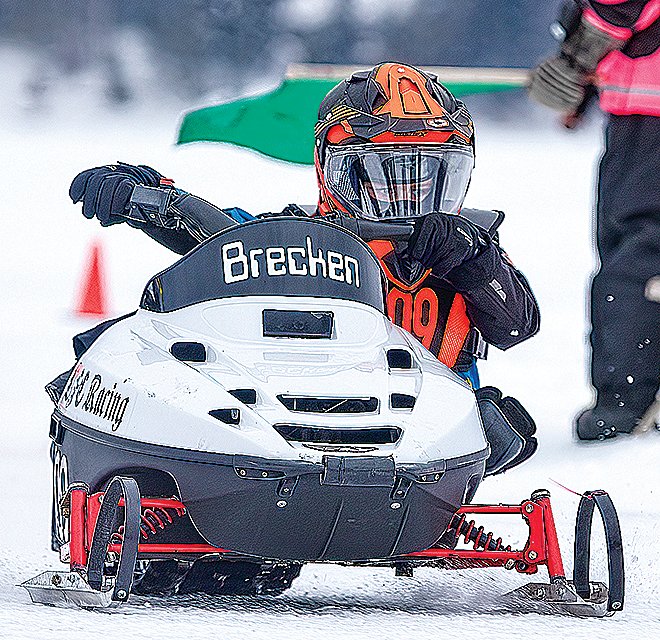 Brecken Cornelius, of Cook, leans into a curve.
D. Colburn 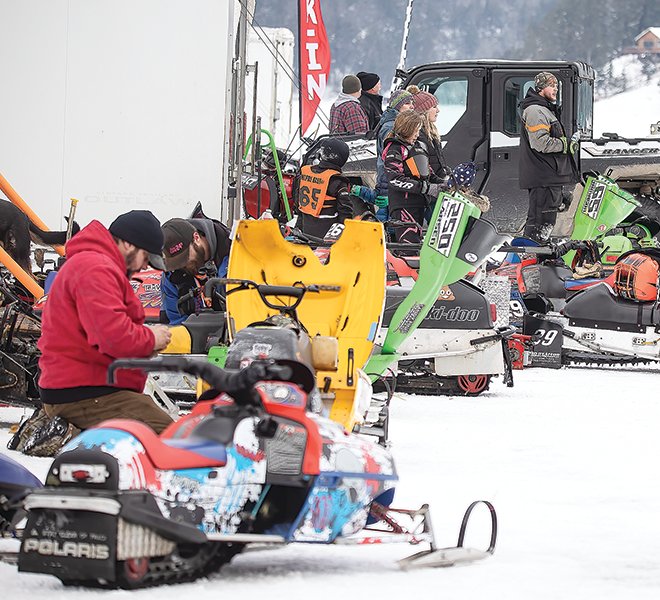 CRANE LAKE- The official start of winter comes in December, but the official start of competitive winter snowmobiling was this last Saturday for the kids competing in the KCPRO East Youth Ice Racing circuit, with the season kickoff event held at Crane Lake.
The Kids Championship Power Racing Organization (KCPRO) started in 1987 in Thief River Falls, and four years later KCPRO East was formed when the organization split into two divisions. Racers ages four to 17 vie for checkered flags in a dozen classes by piloting their snowmobiles around a 25-foot-wide oval track. Most of the kids compete in multiple classes.
The Crane Lake oval was created just a little way offshore north of the Crane Lake Bar and Grill, one of KCPRO East’s gold-level sponsors.
For the 15 kids who showed up with their entourages in tow, this was more than just a friendly get together for a little fun scooting around on the ice. This is serious racing.
A long row of trucks and cargo vans along one side of the oval created a little racing village, serving as both the pit area and a place for all to mingle throughout the day. Most of the cargo vans doubled as both snowmobile transports and workshops on wheels, equipped to handle routine tasks like gear changes for different classes and the inevitable breakdowns that come hand in hand with motor sports.
While most took in the racing standing along the track to cheer the racers on, other spectators who rolled in for the event sat in the heated comfort of idling trucks parked a safe distance beyond a snow retaining wall.
All the kids racing have to be licensed through International Snowmobile Racing Inc., and safety is paramount. Approved helmets and protective body armor are required, with blaze orange covering most of the gear for high visibility, particularly in the event a rider takes a tumble during a race. Because kids pushing the limits while learning a new sport are going to make mistakes, the racing oval is bounded by a four-foot-high snow wall to cushion and contain the crash of a skidding or rolling snowmobile and rider. Spotters are located all around the track to immediately signal a red-flag halt to a race if a snowmobile stalls or goes out of control.
Of course, it appeared that most of the young racers were as thrilled with the excitement of a wipe out as they were crossing the finish line, as one after another popped back up pumping their fists and accepting high fives from their fellow competitors.
KCPRO East riders come from a widespread area, including Wisconsin, but there’s an enthusiastic North Country contingent among them, including Brecken Cornelius, Owen Holmes, and Brexton McCormick, all of Cook, and Logan and Kayla Larsen, of Ely.
Kristen Scott, a Crane Lake native, and her boyfriend, Matt Holmes, are doubly busy on race days. Scott is mom to Brecken Cornelius, and Owen Holmes is Matt’s son.
“This is our third year,” Scott said. “We started halfway through in our first year and everyone was super awesome and brought us through everything.”
That sense of camaraderie, clearly evident among those at the track on Saturday, is an essential part of KCPRO East’s mission to foster friendship, good sportsmanship, and family fun.
“It’s just so nice to have all the families get together,” Scott said. “The kids are out here playing all day. They’re racing, but they’re playing and throwing snowballs and sliding around all the time in between.”
And what was the first thing out of Brecken’s mouth when he was asked what he liked best?
“Making friends,” he said.
But he also said he liked beating people on the track, and he did pretty well in that regard, too, winning three races on Saturday. He has two sleds, he said, a 120 and a 206, and he’s looking forward to the day when he can race bigger snowmobiles.
But while Kristen and Brecken casually waited outside, the atmosphere inside their cargo van was more intense. Matt Holmes, a former racer himself, was in a race against time trying to change the gearing on one of the sleds before kids were called to the line for the next race.
“It’s a lot of work, but it’s a lot of fun,” he said. “And it’s a bunch of great people. We’re all helping each other out. As much as I’ve had to borrow some stuff this weekend, we loan out stuff other weekends, because we all have fun together.”
And that leads back to what Scott said was the big lesson learned for the first event of the season.
“Just bring more parts,” she laughed. “Bring more parts.”
Scott and Holmes and the kids will have nine more opportunities this season to get the parts mix right, with races scheduled through early March. They and the other local racers will get the chance to finish the season close to home, too, with a March 5 race at Shagawa Lake, in Ely, and a March 12 finale on the Cook end of Lake Vermilion.
The North Country crew collectively had a good showing on Saturday. Brecken Cornelius picked up firsts in the SuperStock 120, Improved 120, and SemiPro 206 classes, and added a fourth-place finish in Spec 206. Logan Larsen won Spec 206, with Kayla Larsen placing second. Logan Larsen also placed third in the Champ 1 and Champ 2 classes and fifth in Improved 120. Kayla Larsen brought home another second in SemiPro 206. Brexton McCormick placed second in Stock 120 and SuperStock 120 and third in Improved 120. Owen Holmes took third in Beginner 120 and fourth in Amateur 120.