Moose mortality limited to three animals so far in 2016

Moose mortality limited to three animals so far in 2016 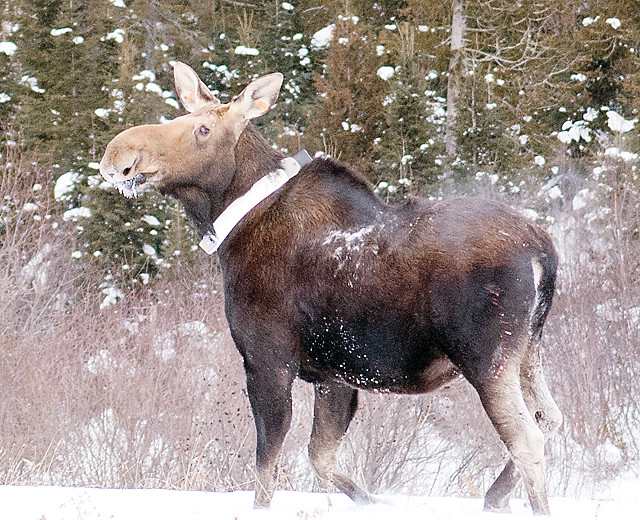 Moose mortality has been limited this year among adult moose in the DNR’s ongoing study.
MNDNR
Posted Wednesday, June 22, 2016 3:41 pm

REGIONAL— News from the Department of Natural Resources’ ongoing moose mortality study continues to be encouraging with only three confirmed moose deaths so far in 2016 from among the 75 collared moose still being monitored for the project.

That translates to a 95 percent survival rate so far this year. That compares to full-year survival rates of 81 percent, 88 percent, and 85 percent for the first three years of the study. Moose mortality tends to peak in late winter or early spring, so most of the expected mortality among the study moose should have already occurred for this year if that normal trend plays out the rest of the year.

DNR researcher Michelle Carstenson noted in a report issued late last week that the sample size of the moose study is declining in the wake of Gov. Mark Dayton’s decision last May to suspend collaring of moose due to high capture-related mortality among study subjects, particularly moose calves. The DNR initially collared more than 100 moose and had been adding moose to the study in subsequent years to maintain a higher sample size. But with the suspension of the collaring last year, the number of moose in the study has been declining. Meanwhile, some of the collars on the remaining 75 moose in the study as of the beginning of the year have malfunctioned, leaving only 53 working collars still on moose in the field. “Collar failures have been a problem and we’ve spent more time searching for missing moose with fixed wing flights to check statuses and attempt to remotely blow-off collars when possible,” said Carstenson.

Poor health and predation appear to be continuing to drive most of the moose deaths, according to Carstenson. DNR researchers determined that an adult moose that died in January was the victim of extreme liver fluke infestation. The six year-old bull was emaciated, weighing only 795 pounds at the time that DNR researchers reached its carcass.

In late April, researchers found a nine year-old bull, still alive but unable to stand. After euthanizing the animal, researchers determined through a field necropsy that the animal was severely anemic, apparently due to a severe infestation of winter ticks. It also appeared to be suffering from meningitis and a parasitic brain infection.

Researchers listed winter ticks as the cause of death.

The third death, of a pregnant 12 year-old female that appeared to be in labor at the time of her death, was ruled a wolf-kill due to severe injuries to her rump and puncture wounds to her neck. Even so, Carstenson reported the incident as a case where health-related issues likely left the animal vulnerable to predation.

The animal’s liver was severely damaged due to liver flukes and it also had evidence of a mild brainworm infection. Carstenson described the moose as a “poster child for the complexity of the factors that are involved in a moose’s death in this study.”

While the 12 year-old female was relatively old for a moose in the wild, and was healthy enough to grow a full-term calf, Carstenson said the animal was also suffering from three serious health conditions, including winter tick infestation and related anemia, in addition to liver flukes and brainworm.

“Add to this, the fact that she was attacked by wolves while calving, so calving behavior made her extremely vulnerable.  Yet, she did not die there…she fought back to some degree, enough to sustain massive injuries to her neck and rump, yet walk 300 meters away from the scene and lay down to die in a watery road ditch.”

Next week: An update on moose calf mortality.