VERMILION RES-ERVATION- It was not so much a crowd as it was a simple gathering of people who came to celebrate the 20th anniversary of the Bois Forte Heritage Center and Cultural Museum on Saturday. … 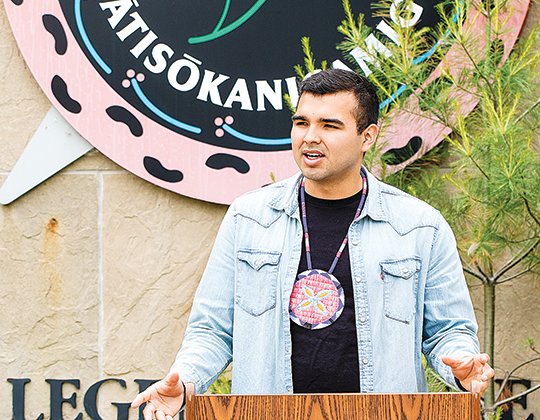 VERMILION RES-ERVATION- It was not so much a crowd as it was a simple gathering of people who came to celebrate the 20th anniversary of the Bois Forte Heritage Center and Cultural Museum on Saturday. A good number of the 50 lunches provided by Fortune Bay Casino Resort went home with attendees to be enjoyed later as leftovers.
But the messages delivered to that small assembly by director and tribal historic preservation officer Jaylen Strong and others were ones that will likely resonate throughout the Bois Forte Band and the surrounding communities long beyond the center’s 21st year.
“We’d like to expand a lot of our services that we provide,” Strong said. “We’d like to provide more classes that are taught by community members to pass that knowledge on. We’d like to expand our library. And the main thing we’d like to expand with the museum is offering those services in different spots.”
Strong’s vision places the center as the hub of a many-spoked wheel, using its resources for outreach to Band members both on and off the reservation, schools and colleges, and other community venues, all while continuing to upgrade and enhance the museum itself.
It’s a vision that builds on work of Phyllis Boshey, an elder and Tribal Council Member who conceived the idea of the museum and dedicated years to seeing it come to life, according to the center’s website. The center was built in 2001 and dedicated on June 1, 2002.
First and foremost, Strong’s vision is focused on what the center can and should do for the Bois Forte people.
“The main thing I want to do would be to build our identity as a Native people,” Strong said. “For example, there are a lot of people that want to do things like learn how to hunt, learn how to sing, things like that, but they don’t know the resources to do so. We want to provide that opportunity.”
That goes beyond Band members living on the Nett Lake and Vermilion reservations to those living in Duluth, the Twin Cities, and other areas.
“We want to provide opportunities for people who are enrolled or have ties to the community, to provide a space that makes them feel comfortable to come back and learn and feel a part of the tribe here,” he said.
But Strong also sees a role for the center in the surrounding community, providing opportunities for people to ask questions and attend workshops to increase their understanding of Ojibwe history and culture.
“Building relationships with the community starts with building relationships with individuals,” he said.
Strong wasn’t yet born when Boshey first brought up the idea of a museum, and he said he believes that there’s been a transition over the years as to how generations have each experienced tradition.
“With my generation I think it’s changed a little bit in the sense that we’re trying to find ways for Western society to view us as legitimate,” he said.
Western culture has often dismissed tribal authority, knowledge, and beliefs, Strong said, particularly when it comes to the validity of oral histories.
“In academic situations a lot of places don’t necessarily take our traditional histories as credible sources,” Strong said. “But for us, we have stories that are hundreds of years old. I use my grandparents as an example. They’re in their seventies, and their grandparents were in their seventies before they passed, so that’s 140 years of knowledge that’s being passed on to me. Why wouldn’t that be credible? I think that’s one of the things that people in my generation are recognizing.”
Another member of Strong’s generation and his colleague at the center, visitor services manager Kyle Littlewolf, is also invested in integrating the center more fully in the life of the Bois Forte Band. Toward that end, he described a series of events for Saturday’s attendees that will take place across the summer as part of an extended 20th anniversary celebration.
“I’m fairly new to this job, and I think there’s a lot of knowledge here that needs to be shared with other people,” Littlewolf said. “I want to have a celebration all summer long.”
The events will include such things as movie nights, a late-July flintknapping class open that is open to the public, and special pontoon boat trips for Band members to sites of historical importance on Lake Vermilion.
For complete information about the Heritage Center and Cultural Museum, including hours, admission prices, and upcoming events, go to www.boisforteheritagecenter.com, check their Facebook page, or call 218-753-6017. The center is located in within the Fortune Bay resort complex grounds at 1500 Bois Forte Road, Tower.