TOWER— Persistence has finally paid off for the developer of a planned RV park here. After six years of on-again, off-again battles with city officials over his proposal, Dave Rose has his … 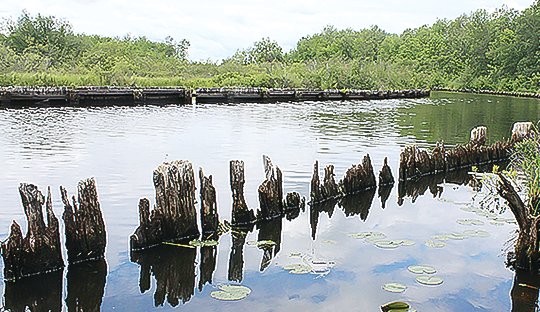 The tattered remains of century-old river pilings have become a sore point between developers and the city of Tower.
M. Helmberger
Posted Wednesday, June 23, 2021 6:08 pm

TOWER— Persistence has finally paid off for the developer of a planned RV park here. After six years of on-again, off-again battles with city officials over his proposal, Dave Rose has his final approval in place after the Minnesota Department of Health signed off on his plans for a 32-unit RV campground, located along the East Two River. Construction on the project has been underway, in fits and starts, for the past several months.
Yet Rose still faces at least one more battle with city hall. Rose and an adjacent developer, Geoff Griffin, have expressed their intent to remove about 200 linear feet of old retaining wall, or pilings, along the river, that currently prevents access to the river from their property. Both developers say they want to provide docking for future users or owners of their property, yet city officials contend that the removal of the pilings would hasten sedimentation into the river, undermining the city’s efforts to maintain a clear channel along the river, which connects Lake Vermilion to the city’s harbor.
City officials recently threatened the two men with prosecution if they move forward with their plan to remove the pilings, which were installed about a century ago. “Any developer or contractor who engages in any efforts to remove the pilings, without government authorization or clearance, will be subject to criminal prosecution for the offense of intentional damage to public property,” wrote City Attorney Mitch Brunfelt in a May 27 email.
Yet, it’s not clear on what basis the city could charge the two developers, since the city lacks an ordinance that addresses the issue. What’s more, officials with the Department of Natural Resources contend that the retaining wall itself lacks a permit and that it likely would not receive a permit were the city to seek to build it today. And the city, as recently as last year, granted permission for another nearby property owner to remove a smaller portion of retaining wall to provide boat access to the river, setting an uncomfortable precedent.
Jurisdiction is also in question. Griffin notes that while the city has zoning control over land within its boundaries, the DNR has jurisdiction over public waters beyond the ordinary high water mark, which would seem to apply to the river pilings, which are located more than a dozen feet off shore.
According to DNR Area Hydrologist Kim Boland, neither Rose nor Griffin would likely requires a permit under state rules to remove the pilings. That’s a view that’s been challenged by Brunfelt, who cited a provision in state rules that require a permit to remove a water level control structure. Brunfelt contends in a June 11 email to Boland that the retaining wall meets the definition of a water level control structure because it does “play a positive role in being able to maintain a sufficient water depth in the river channel for motorized boat traffic.”
Boland is skeptical of that argument but indicated that the DNR is in communication with the city to resolve the dispute. “We are currently working with the city of Tower to get a better understanding of the situation and are awaiting additional information from the city in order to evaluate what state public waters rules will apply,” she wrote in a June 17 email to the Timberjay.
State rules generally encourage the removal of manmade structures “which do not serve the public interest” from public waters. Brunfelt contends that the retaining wall serves the interest of navigation in the river.
“Obviously, this motorized boat traffic on the East Two River is very important to the tourism and outdoors-based economy of the city of Tower,” Brunfelt wrote in his response to Boland. “These piling structures constitute public infrastructure and serve an important public purpose.  Any future decisions that may permit or allow for the removal of these structures should not be done arbitrarily or capriciously.”
At the same time, both Rose and Griffin have an interest in gaining access to the river, something that is currently blocked by the pilings, which form a barrier about 15 feet offshore.
Rose said he spoke to the U.S. Army Corps and the DNR more than a year ago about installing a canal and a small harbor, which would allow the users of his property to dock boats outside the river channel. Rose said the two agencies denied his request, indicating that there was sufficient room in the river for him to install docks. But city officials have been cool to the installation of docks within the river channel. And Rose and Griffin can’t make use of shoreline dockage unless a stretch of the pilings are removed.
For now, both developers are holding off, as city and state officials try to determine who really has jurisdiction over the pilings and what, if anything, can be done to provide the developers with access to the river.
Rose isn’t letting the dispute get in the way of his efforts to complete his RV park, which he is calling the Tower RV Resort. Among the amenities he is currently touting on his website is protected docking, “that will be the perfect spot to dock your boat when not in use.”
That perfect spot, it seems, remains a work in progress.