A show of force in contract talks

Teachers make their case at ISD 2142 school board meeting

A show of force in contract talks

Teachers make their case at ISD 2142 school board meeting 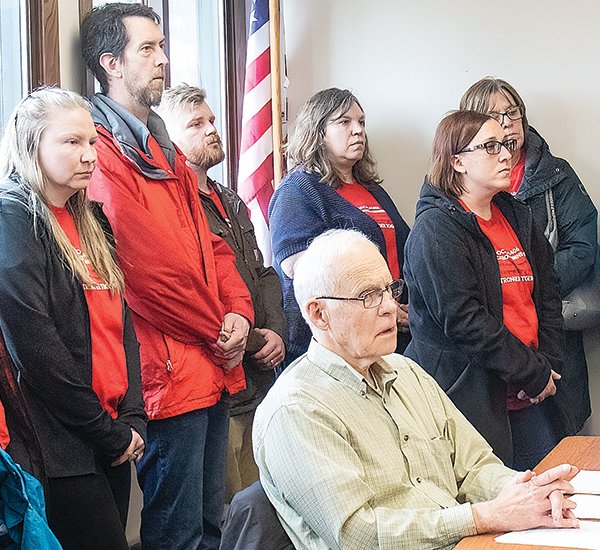 Many members of the teachers union at ISD 2142 gathered outside the district office after standing in solidarity over stalled contract negotiations at the district’s board meeting Tuesday night.
D. Colburn 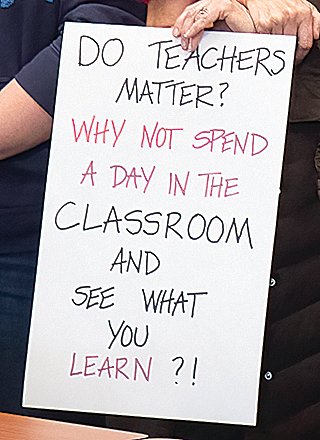 REGIONAL- The neutral-colored walls of the ISD 2142 school board room were obscured Tuesday night by a solid wave of red as more than 70 teachers from across the district descended on the district office to display their solidarity in stalled contract negotiations.
All were wearing bright red t-shirts emblazoned with the union name, “Local #1406 Education Minnesota,” the names of all five schools, and the slogan “Stronger Together.” The phrase could have been standing together, as the teachers stood shoulder to shoulder around all four walls of the room and spilled out into the hallway.
Local President Tim Herring spoke first on behalf of the group, reading a letter published in last week’s Timberjay.
“Our district can’t afford to lose good teachers,” he said. “Educators are at a breaking point – not just here, but across the state and nation. School districts are scrambling to hire and keep teachers and other school staff. The district’s current offer would put St. Louis County educators’ compensation behind similar districts in our area. St. Louis County can afford to offer more than a one to 1.5 percent increase in salary. That doesn’t come close to covering the rate of inflation. There’s $3.3 million in the district’s rainy-day fund – 11 percent of the district’s annual budget.”
“Our next step is mediation with the district on May 4,” Herring continued. “Our union strongly believes we can reach a fair settlement, one that puts students first while acknowledging and respecting the efforts of staff. St. Louis County educators have been working without a contract for nearly one year. We want to get our focus back where it belongs – in the classroom teaching the future generations of our communities.”
Northeast Range third grade teacher Crystal Poppler then read a letter of support from a parent, who stressed the dedication of teachers to put in long hours before and after school and during evenings and weekends to help their students be successful.
“The teachers have eyes in 2142 to see students at their best and worst every day,” Poppler read, “handling social and behavioral issues that disrupt classroom learning and listening to the cares concerns and problems that students face every day. At the end of the day, they are physically and emotionally exhausted. But they continue to teach because that’s where their heart is. The teachers of School District 2142 deserve to be compensated for their time and extra efforts that they put into their jobs going above and beyond their job qualifications. This compensation will show that they are valued and appreciated in the community for all and ensure that our students will have these wonderful, hardworking committed teachers for years to come.”
Herring and Poppler spoke during public comment time when comments are limited to three to five minutes. After they concluded, union members left the building. There was no agenda item in the meeting addressing ongoing contract negotiations.
Herring said after the meeting that showing up in force was important at this juncture.
“Both sides need to reach a fair settlement,” he said. “We have been working without a contract for 300-plus days. One day is far too long, especially since our educators have risen to the challenges brought upon us prior to and during the pandemic to give students the best learning environment possible. We hope to accomplish a community awareness of our solidarity and to reach a fair settlement that acknowledges and respects the efforts of our teachers.”
Another mediated negotiation session is scheduled for May 4, and Herring expressed hope a tentative contract will come out of that meeting.
Two previous tentative agreements by negotiators had been rejected when put to a vote of union membership.
Superintendent Reggie Engebritson said after the meeting that the district’s negotiating team is looking forward to a productive session on May 4.
In other business, the board:
• Heard from Eric Honkanen, of Honkanen Law Firm in Virginia, about an anonymous donor who wants to set up a trust to provide funds for a greenhouse at Northeast Range School. A preliminary proposal had already been provided to the district and is under review by administrators and district counsel. Business Director Kim Johnson noted some concerns about how the money would be disbursed and accounted for that need to be worked out, but there was consensus among board and staff members alike that they wanted to move ahead by placing the discussion on the next working meeting agenda for possible action by the end of May.
• Heard that the three-year school picture agreement with Lifespan has expired and that schools had expressed a desire to use local photographers instead. The board unanimously approved the request.
• Formally accepted the response to the American Indian Parent Advisory Committee’s recommendations related to AIPAC’s vote of nonconcurrence with Native American education standards.