ELY – The newest residents at the International Wolf Center, Blackstone and Caz, are now part of the Exhibit Pack.After several months of getting acclimated to their new home and roommates, the … 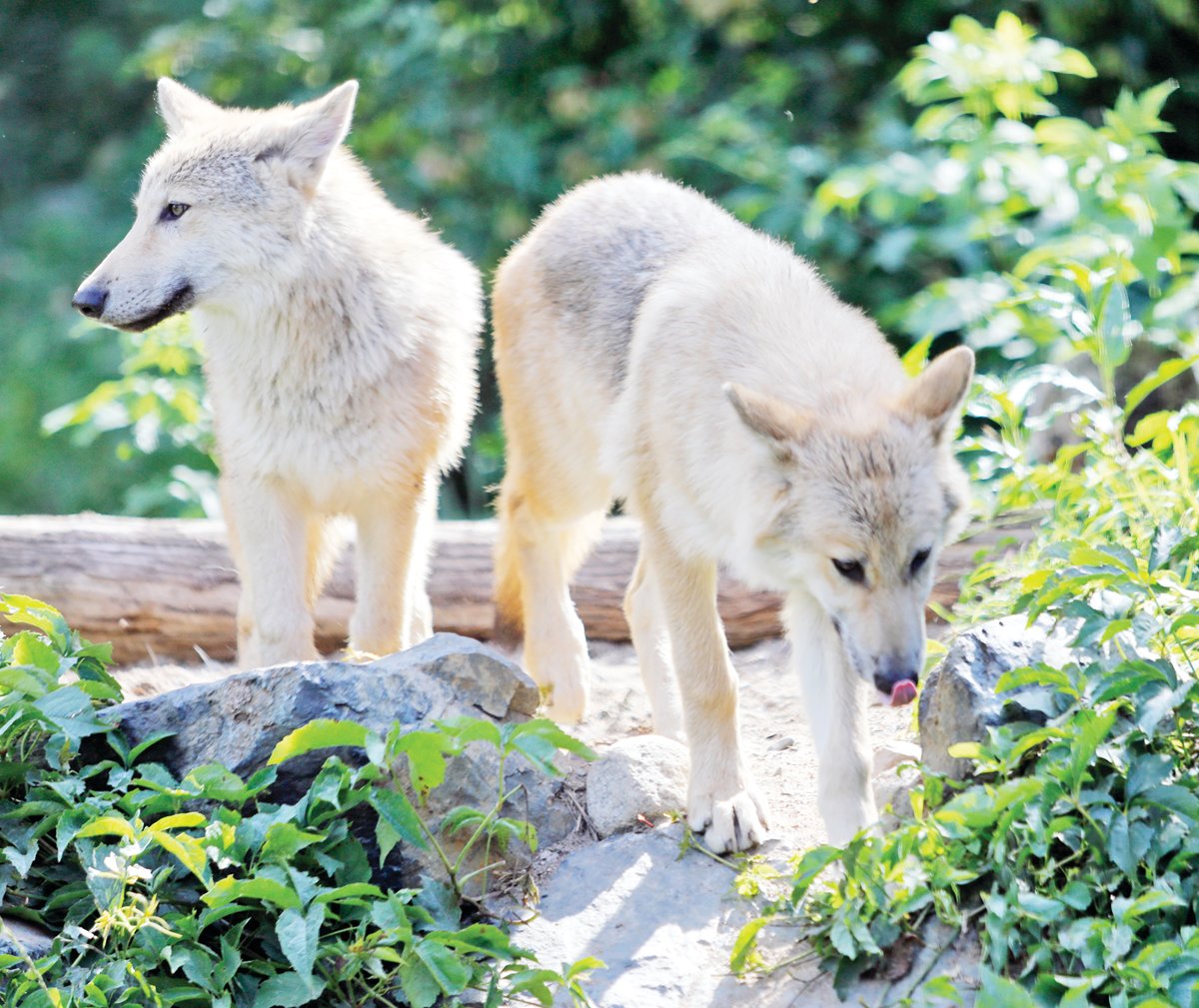 The Wolf Center’s newest residents, Caz and Blackstone, were allowed to joined the rest of the Exhibit Pack late last week and were getting acquainted with Rieka, Axel and Grayson over the week.
K. Vandervort
Posted Thursday, August 4, 2022 6:00 pm

ELY – The newest residents at the International Wolf Center, Blackstone and Caz, are now part of the Exhibit Pack.
After several months of getting acclimated to their new home and roommates, the new pups joined Rieka, Grayson and Axel late last week in the public exhibit area that is viewable through several large windows at the Wolf Center.
So far, so good, according to wolf curator Lori Schmdt.
“It is important to note that introductions are not a one day event, but a transition for personalities to emerge and for some discipline to be established for some very excited pups,” she said. “The size of the enclosure is a great stimuli and pups like to run and chase.”
Initially in the Pack Holding Area, Wolf Center staff saw the weaker socialization of Axel and Grayson and their anxiety with coming into a smaller area of confinement such as the retired space. Rieka was very comfortable with this area and the pups were relaxed as well, Schmidt noted.
“The pups did a lot of chasing and jumping on the adults, which caused Axel some increased anxiety,” she said, “so we decided to move the arctics (Axel and Grayson) out and let Rieka have some time with the pups, then moved all of them to the larger Pack Holding Area gate rather than have more tension in the smaller chute area.”
Within a few hours, according to Schmidt, Grayson, Rieka and the pups were observed in some group activities on the pump house and the Explore.org camera captured some play behavior with Rieka and the pups.
“Axel continues to show some tension when pups approach or jump on him and Rieka has been guarding the pups when Axel approaches, adding to his tension,” she added. “This is similar behavior that we saw through the fence when Rieka was at the pup yard.”
The Wolf Center has a behavioral team recording data when they are closed to the public and educators are keeping an eye on the wolves throughout the business hours.
“A member of the wolf care team is always available to provide distractions and to open up alternative areas to retirement and the Wolf Care Center if we need to disperse some of the activity,” Schmidt said.
“Wolf care staff’s focus is to distract Rieka’s defense drive toward Axel when the pups are near. Wolves are always challenged by changes to pack structure and the staff will continue to help them work through that change. Dominance can be noisy, but the adults are using controlled muzzle bites and the pups are responding with appropriate submission,” she said.
The addition of the new wolf pups this spring happened very fast. The Wolf Center planned to add pups in 2020, but the COVID-19 pandemic forced officials to delay those plans for one year. And last year, the Wolf Center was only able to procure one pup in 2021.
“Adding pups this year was important for the health of the pack, and to allow our yearling wolf, Rieka, to experience some pup behavior she lacked as a singleton,” Schmidt said.
“We had three educational facilities lined up to work with, two in Canada and one here in the United States. Pup welting is always a waiting game. One facility’s mating pair didn’t work out. The other facility’s just had a single pup available this year, and they decided to keep her. The third facility, where Rieka came from, had multiple breedings but each had just one pup,” she said.
Schmidt said she looked for other wolf pup options, through the help of the U.S. Department of Agriculture, and found an acceptable facility in western Minnesota. They were a little bit older so we didn’t bottle feed them, as we normally start with that at 10-12 days of age.” The two new pups, born April 6 and brought to the Ely facility on May 10.