If you’ve noticed more of that white fluff in the air in recent days, you’re not alone. It’s the fluff that female aspen trees produce in order to disperse their seeds and … 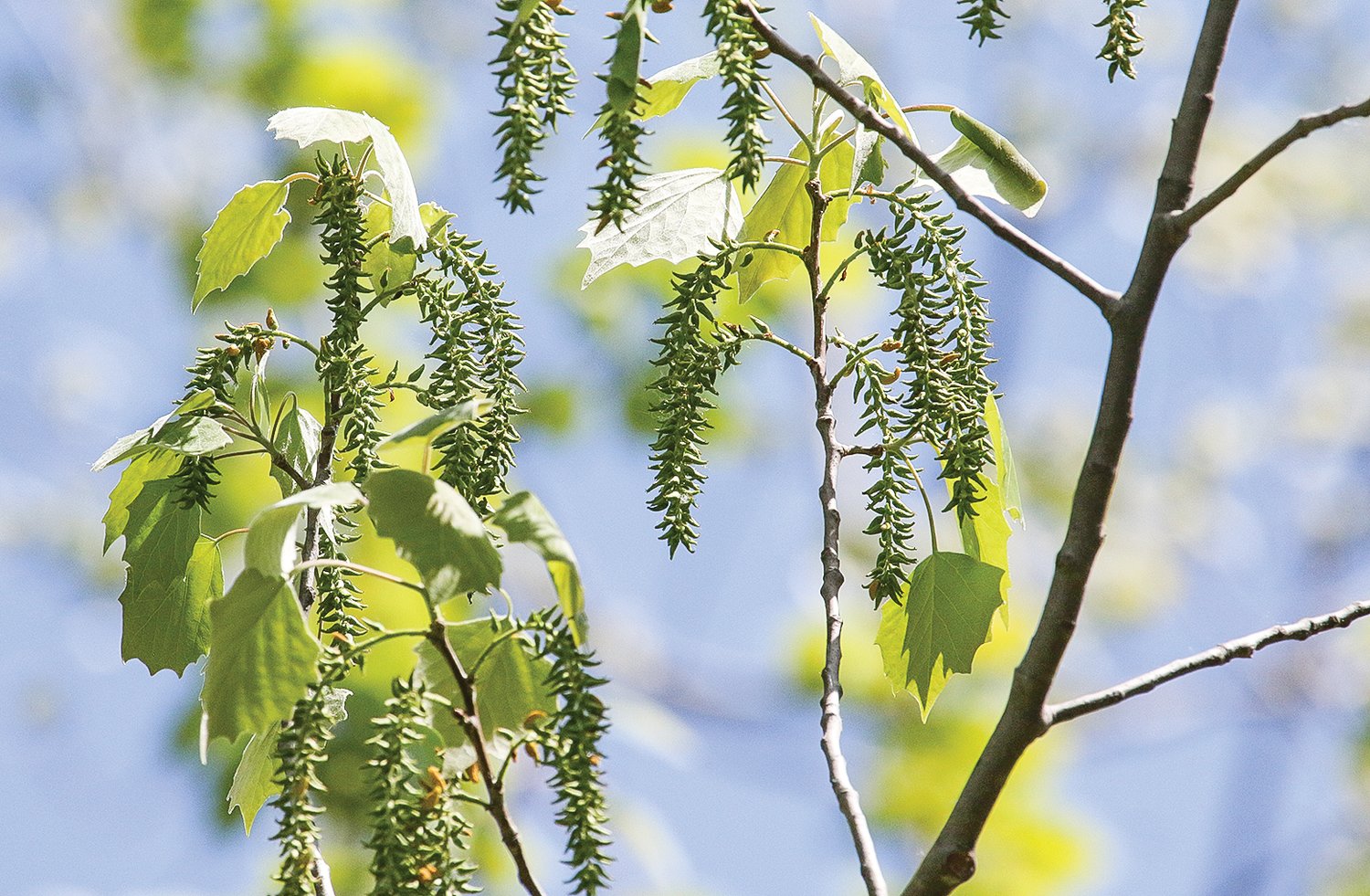 Like most female aspen in our area this year, this big-toothed aspen has put its energy in the production of seed catkins, which are contributing to the abundance of aspen fluff this spring.
M. Helmberger 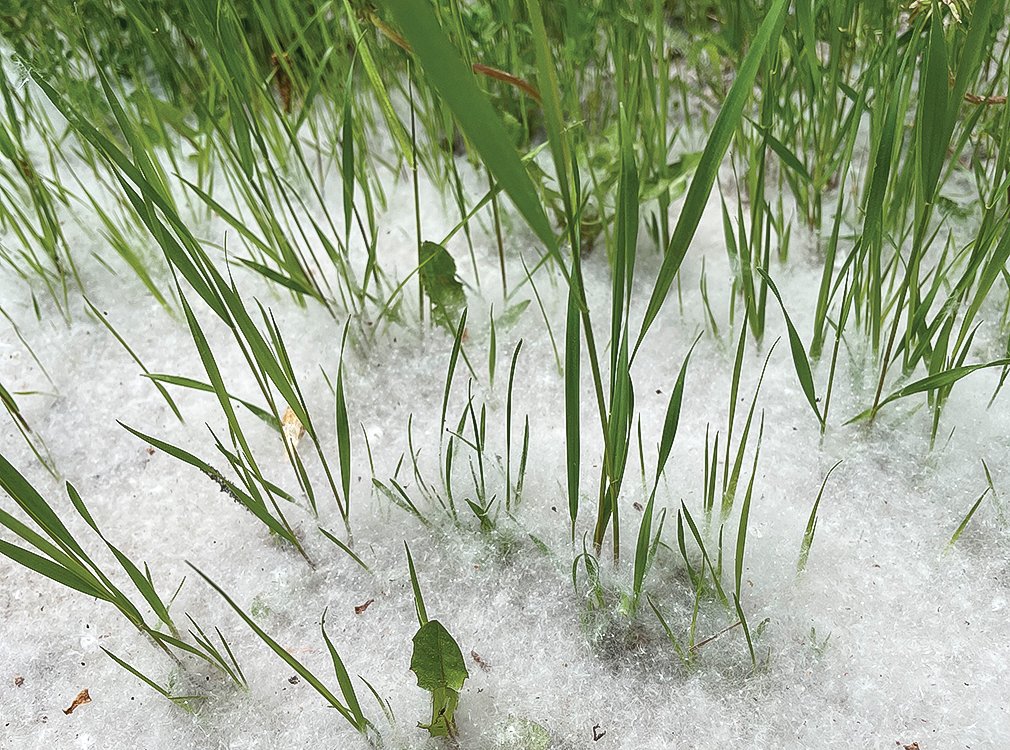 Aspen fluff accumulates like snow in the grass along Holter Road, near Tower. The fluff is unusually abundant this year, likely a response to last year’s drought.
M. Helmberger
Previous Next
Posted Wednesday, June 8, 2022 7:40 pm

If you’ve noticed more of that white fluff in the air in recent days, you’re not alone. It’s the fluff that female aspen trees produce in order to disperse their seeds and it’s been piling up to a degree we haven’t seen here in quite a while. Road edges have appeared white at times, almost like snow, window screens have been clogged with the stuff and lakes and ponds have had a noticeable skim of white as well.
So, what exactly is going on?
It’s hard to say for certain, but it’s likely related to last year’s drought. Extreme drought, like we experienced last summer and fall, stresses virtually all plants, and that includes trees. You might think that drought stress would prompt plants to produce fewer seeds as a result, as they focus their limited resources on survival. Yet drought often has the opposite effect, particularly in trees, as it triggers a burst of seed production. It’s as if the tree is preparing for its own demise by ensuring that more of its progeny have a chance to survive in the future.
Our area aspen aren’t the only trees responding to the drought stress they experienced last year. I’ve noted that the red maples are heavily laden with their helicopter-like seeds as well.
The abundance of aspen fluff this year actually got me thinking a bit more than usual about a tree that we often take for granted around here. We actually have three species of the genus Populus, including Populus tremuloides (quaking aspen), Populus grandidentata (big-toothed aspen) and Populus balsamifera (Balsam poplar) that are commonly found in our area and they all use fluff as a means of seed dispersal, so the fluff we’re seeing now could be from any of these three species.
Only the female trees produce fluff, which begins to disperse as their fertilized catkins mature and open, which typically occurs in our region in late May to early June. Aspen trees are dioecious, which means that they are either male or female. Many plants have both male and female parts (and are known as monoecious), but some plants are one or the other. What’s interesting about aspen is that the male or female trees tend to grow together in clumps or small groves. That’s because aspen grow as interconnected clones that are joined via their root systems, so what appears to be a grove of very similar trees may actually be a single organism that has produced multiple stems from its single root system. In this sense, when we cut an aspen tree, we are actually cutting a stem or branch from the larger whole. That’s one reason that aspen are so quick to regrow after they’ve been logged or burned in a fire— an extensive root system is already well established and it can direct substantial resources to rapid regrowth. It’s not unusual for aspen sprouts to grow eight feet in the first year after logging or fire. Aspen are very intolerant of shading, so that quick response helps give them a jump on other trees that typically have to resprout and grow from seed.
Some of these aspen clones are extremely old and it could be argued that aspen are among the longest-lived organisms on earth. There’s an aspen clone in the mountains of Utah, known as the Pando clone, that researchers have concluded is approximately 80,000 years old. If so, that would far surpass the age of even the oldest bristlecone pines, which have long been seen as the oldest living trees, known to live up to 5,000 years.
Vegetative reproduction, through sprouting, is an effective way for a plant to maintain itself where it already exists, although it comes with limitations. While a clone that sustains itself for 80,000 years is amazing, it is only possible in a relatively stable environment. Researchers have discovered that the Pando clone, for example, appears to be dying, likely a victim of climate change and other human impacts on the environment,.
Sexual reproduction, through seed-making and distribution is how plants establish themselves in new areas, but it also provides long-lived plant species an opportunity to adapt over time to changes in their existing habitat. Sexual reproduction mixes genetic material in new and different ways, providing for the changes that allow a species to be successful in a changing world.
Aspen aare remarkably effective in both types of reproduction, which is probably one reason they’ve been so successful.
Aspen as what are known as a pioneer species, in that they are quick to revegetate disturbed areas, particularly in the wake of fire, through seeding. All that fluff allows the seeds to be widely distributed by the wind. When those seeds land on a disturbed site, with plentiful sunshine and appropriate soil, they will grow into a new tree. Over time, that tree can create its own clone, eventually generating a grove of genetically-identical “trees.”
In the right conditions, these clones can survive for thousands of years. And produce plenty of fluff along the way.

A short history of water on The Rock