Walls and roof ready to go up at Ely school project

ELY – Steel roof joists are on the construction site, and precast wall units will delivered and placed next week for the $20 million building and renovation project for Ely schools.A new senior …

Walls and roof ready to go up at Ely school project 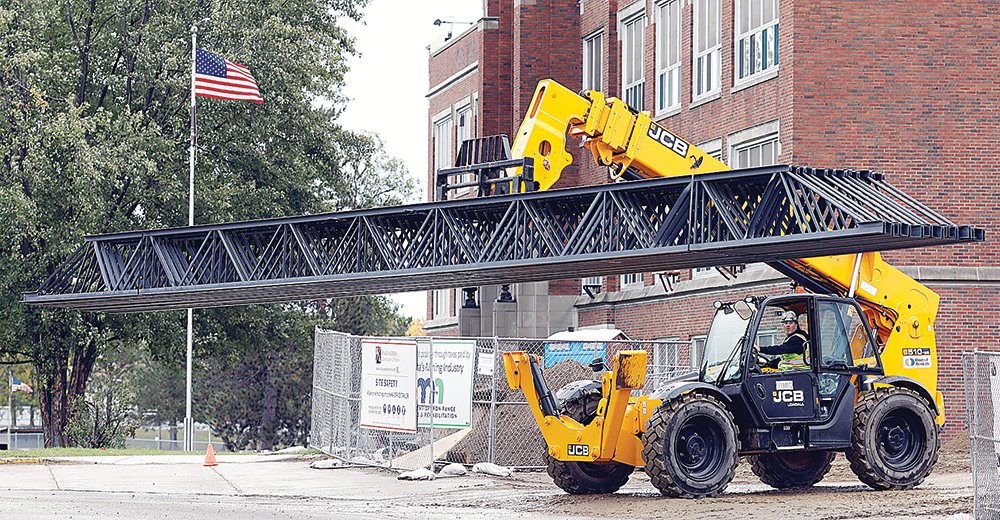 ELY – Steel roof joists are on the construction site, and precast wall units will delivered and placed next week for the $20 million building and renovation project for Ely schools.
A new senior project manager for Kraus-Anderson took over the project this week. Todd Erickson updated the school board Monday night during a monthly study session.
As the new building that will link the existing Memorial and Washington schools takes shape, construction managers are in the midst of re-identifying and re-prioritizing the components of the second bid package, rejected last spring because of exorbitant material and labor cost estimates.
That second bid package is now split into Bid Package Three and Bid Package Four and will “hit the streets” for construction companies to bid on next month and in January, according to Erickson.
Meanwhile, the Early Childhood Family Education area, located in the southeast corner of the Washington school, was completed and turned back over to school officials on Monday. ”We have a few minor touchups to complete, but they are good to go,” he said. He showed photographs of the new bathrooms and cabinetry in that new area.
A temporary concrete road was constructed though the middle of the work site to handle the weight of the crane needed to set the precast wall units, Erickson said.
Some high school and elementary classrooms are already occupied. The school’s new heating plant, located on the south end of the Memorial building, will be ready to fire up next week, according to building officials.
“We are five months into a 15-month project and are about one-third completed,” Erickson said. “We’ve spent about 10 percent ($2,128,523) of the budget on that first third of the project.”
A contingency fund of $975,000, is being used to pay for unexpected, delayed and reworked portions of the project. Nearly half of the fund is already depleted, Erickson said. Some of the components of the rejected Bid Package Two that were pulled into Bid Package One to keep the project on course were completed through the contingency fund.
Erickson explained why the scope of the project was modified.
“The new addition between the Memorial and Washington buildings grew by 5,000 square feet from the original plans. At a conservative $200 per square-foot cost estimate, that added about one million dollars to the project,” he said.
A budget misalignment of about $700,000 on added building features and space add-ons was not realigned or value engineered.
“COVID-related price and supply chain issues increased many costs across the board,” Erickson added. “We are still getting almost daily updates on steel and aluminum pricing.”
The project’s Bid Package Two no longer exists and is replaced with two separate construction package components. Erickson said about $3,310,000 remains in the budget to complete the two re-scoped bid packages.
Bid Package Three will go out to contractors in October and will include the removal and replacement of the existing HVAC systems in the campus heating, cooling and air handling system, new mechanical controls, an entire new low-voltage system that handles such things as intercoms, clocks, fire alarms, burglar alarms, and building access controls, window replacement project completion for the two existing buildings, and a new fire suppression system in the Memorial building attic area to bring the building up to code.
Bid Package Four will likely go to contractors in January 2022 and will include the boys and girls locker room relocation and completion, as many as eight toilet room revisions and upgrades (sinks, ceiling, lighting, paints, mirrors and tile patching as needed) and one new toilet room addition on the main floor of the Memorial building, classroom and science room remodeling (doors, paint, lighting, drop ceilings, etc.), and a fitness room revision in the existing lunch room area.
Other topics
At the prompting of school board chair Ray Marsnik, Erickson addressed perceived construction safety concerns pointed out by a district resident in a recently-published photograph.
“There are a few things here that are incorrect,” Erickson said. “This is not gross negligence. The load is not required to be secured on a forklift. There was a (spotter) watching.”
Erickson highlighted steps taken at the construction site to maintain safety.
“We talked to the contractor that is in the picture. We talked to all our other contractors. We put signage on all the gates that says no construction activity is to occur between 7:40 and 8:05 a.m., and in the afternoon we have a window from 2:40 to 3:05 p.m.,” he said. “The gates are locked during these times. We have addressed it on site. We have addressed it with our corporate office. I don’t see safety violations in the photograph, but I wasn’t there.”
Marsnik reported that he talked with the school district’s lobbyist, Jeff Anderson, with the Costin Group, who indicated that a failed sales tax exemption proposal for school construction materials will be re-introduced in the state legislature in the upcoming session. “If that goes through, we could have a savings of about $500,000 on this project,” he said.
KA and city officials continue to address the water lead problems. Karl Larsen, of Architectural Resources Inc., said the source of the lead in the water has not been fully determined.
“All the fixtures were tested in the entire school and all of the numbers came back high,” he said. “When that happens, it tends to lead to the cause being the actual water supply into the building and not necessarily the pipes within the building.”
He continued, “We are trying to determine if it is the street service from the public utility, or within the pipes in the school. Once we have that determination, we can dial in the solution.”
Additional test results should be available to be analyzed this week.