NETT LAKE – A band bound to the North Country will be gracing the stage at Wild Waters Music Fest in Duluth next week. Native to Nett Lake, the band War Bonnet is a natural fit in the concert … 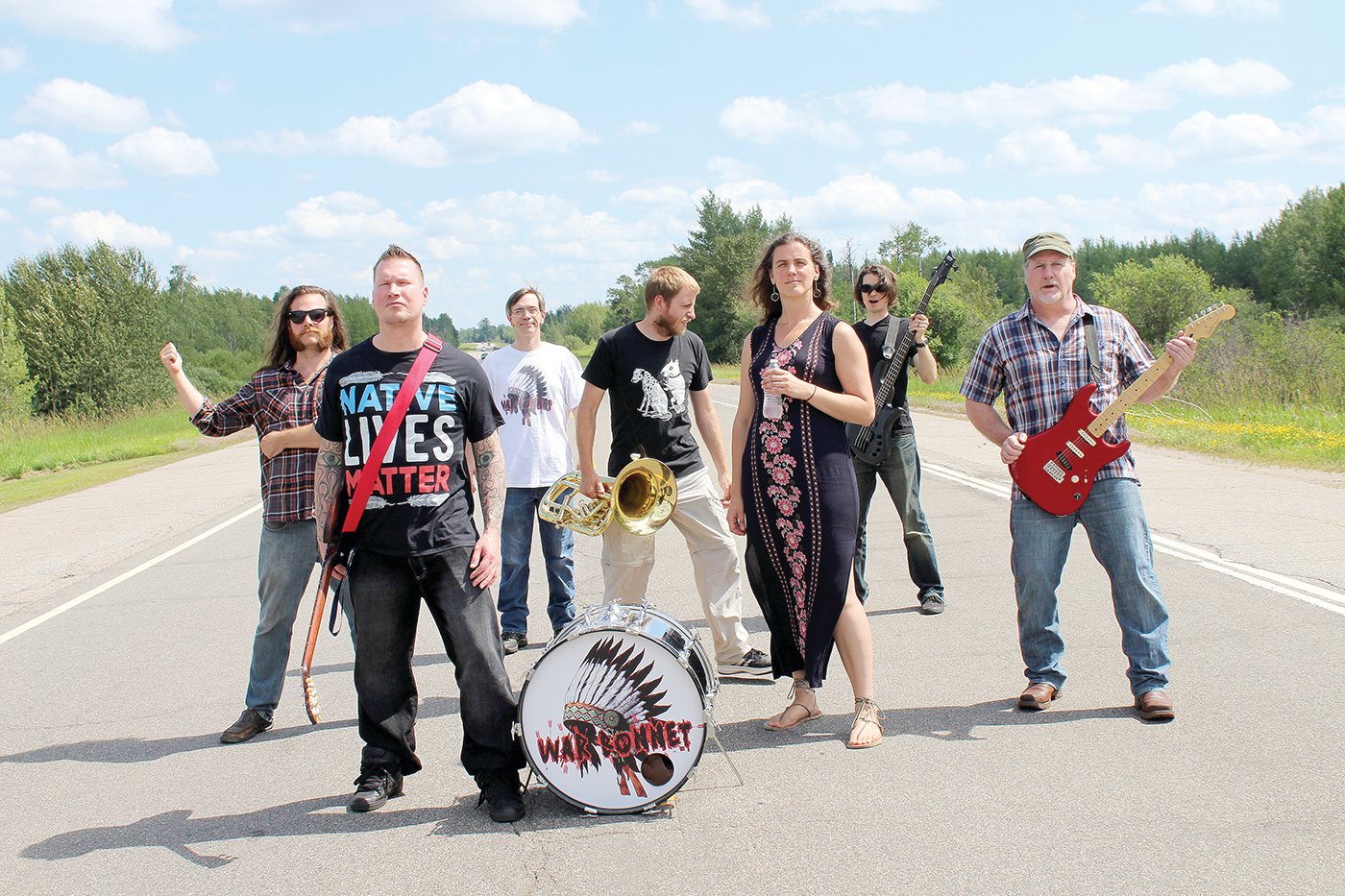 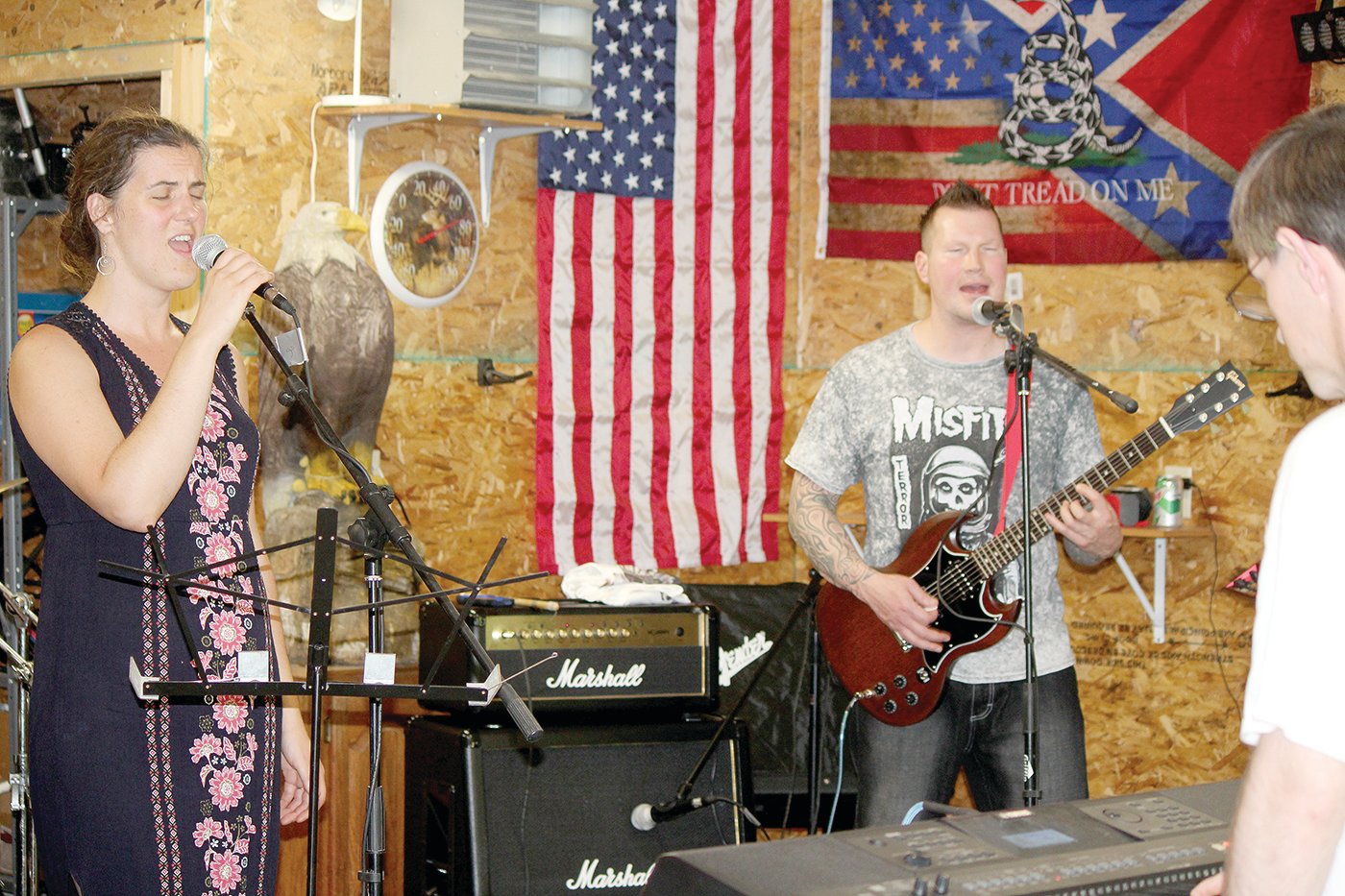 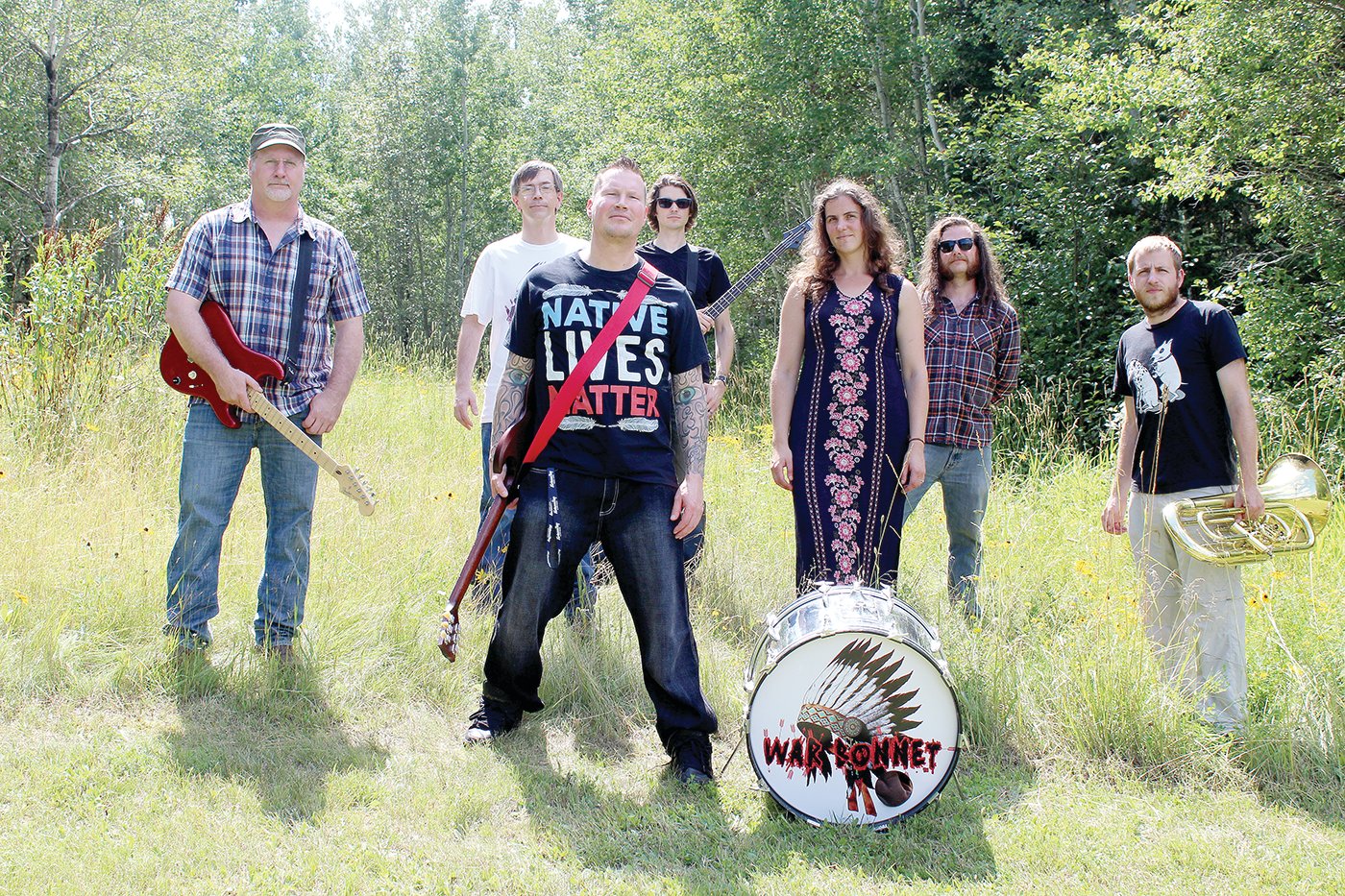 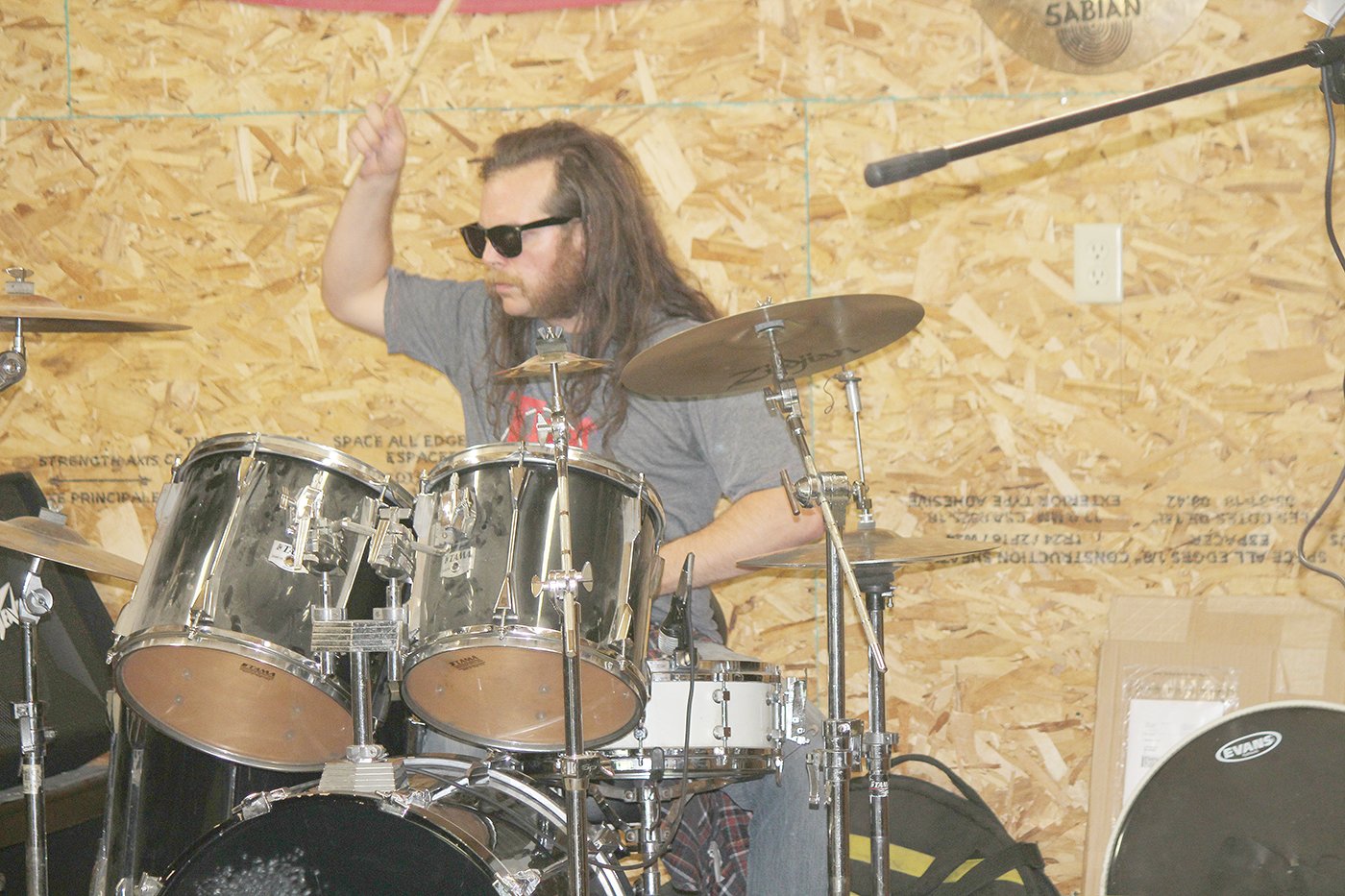 Drummer Tom Frichek keeps the beat for the War Bonnet ensemble during a rehearsal Sunday in Cook.
C. Dey 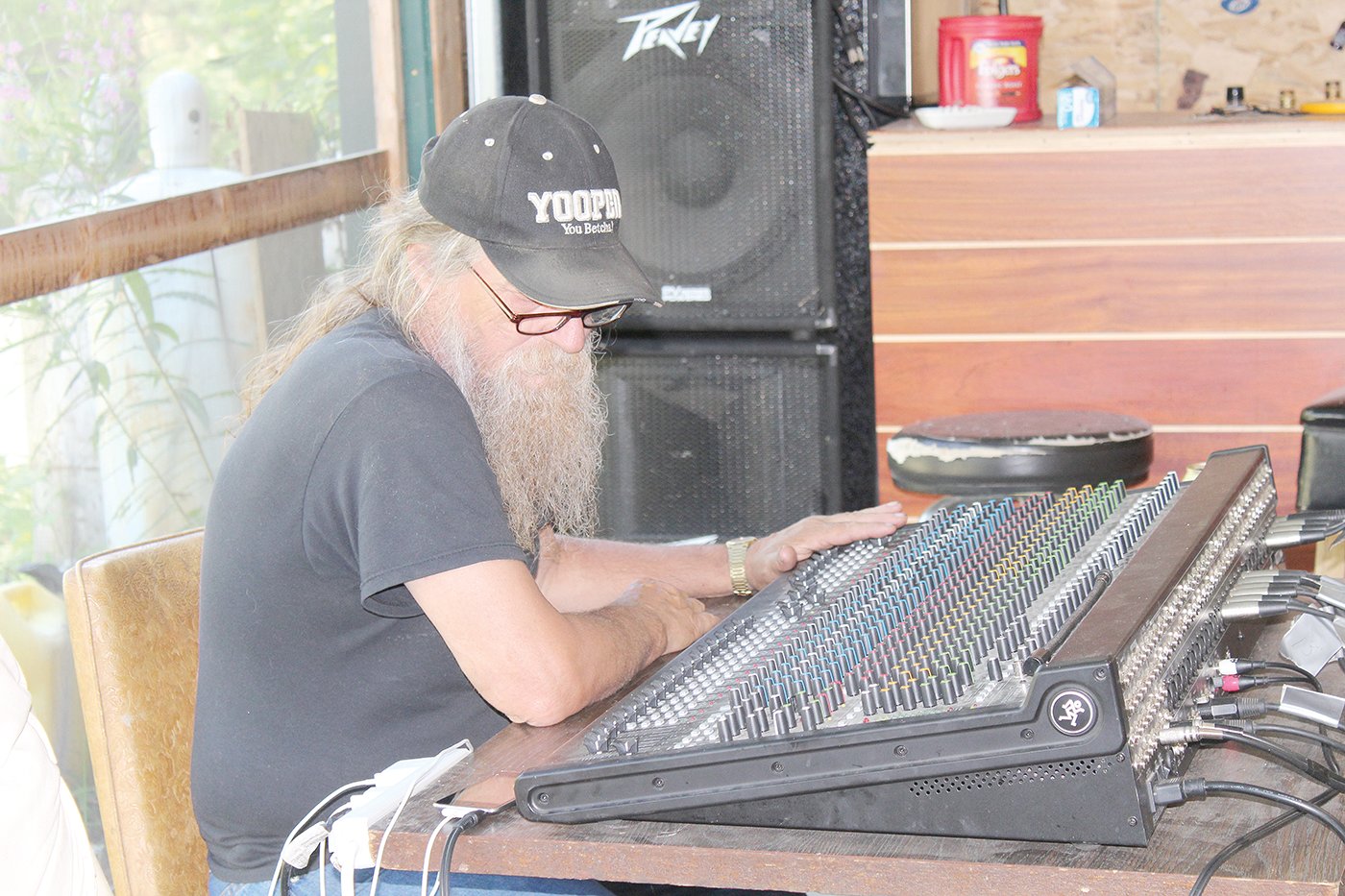 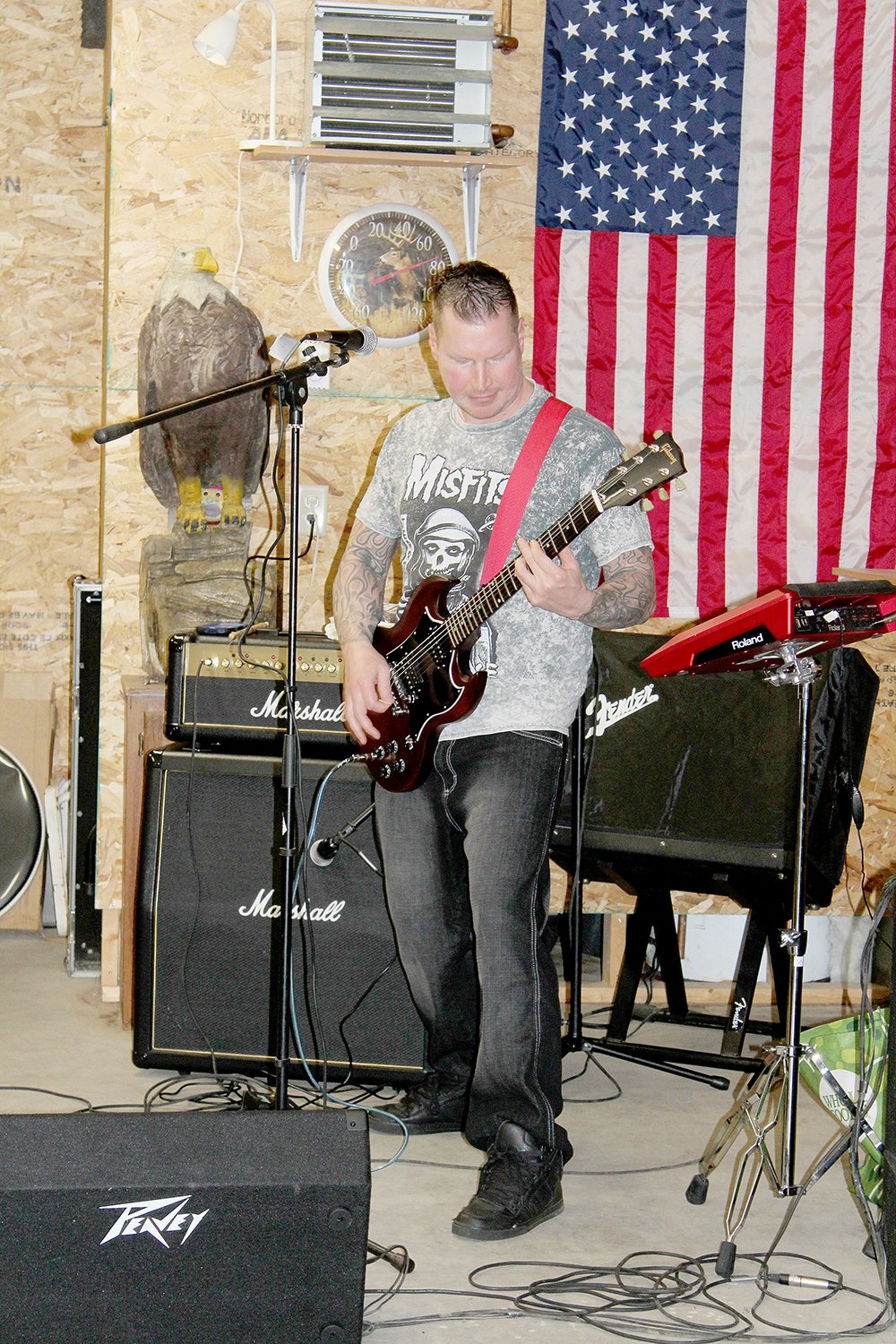 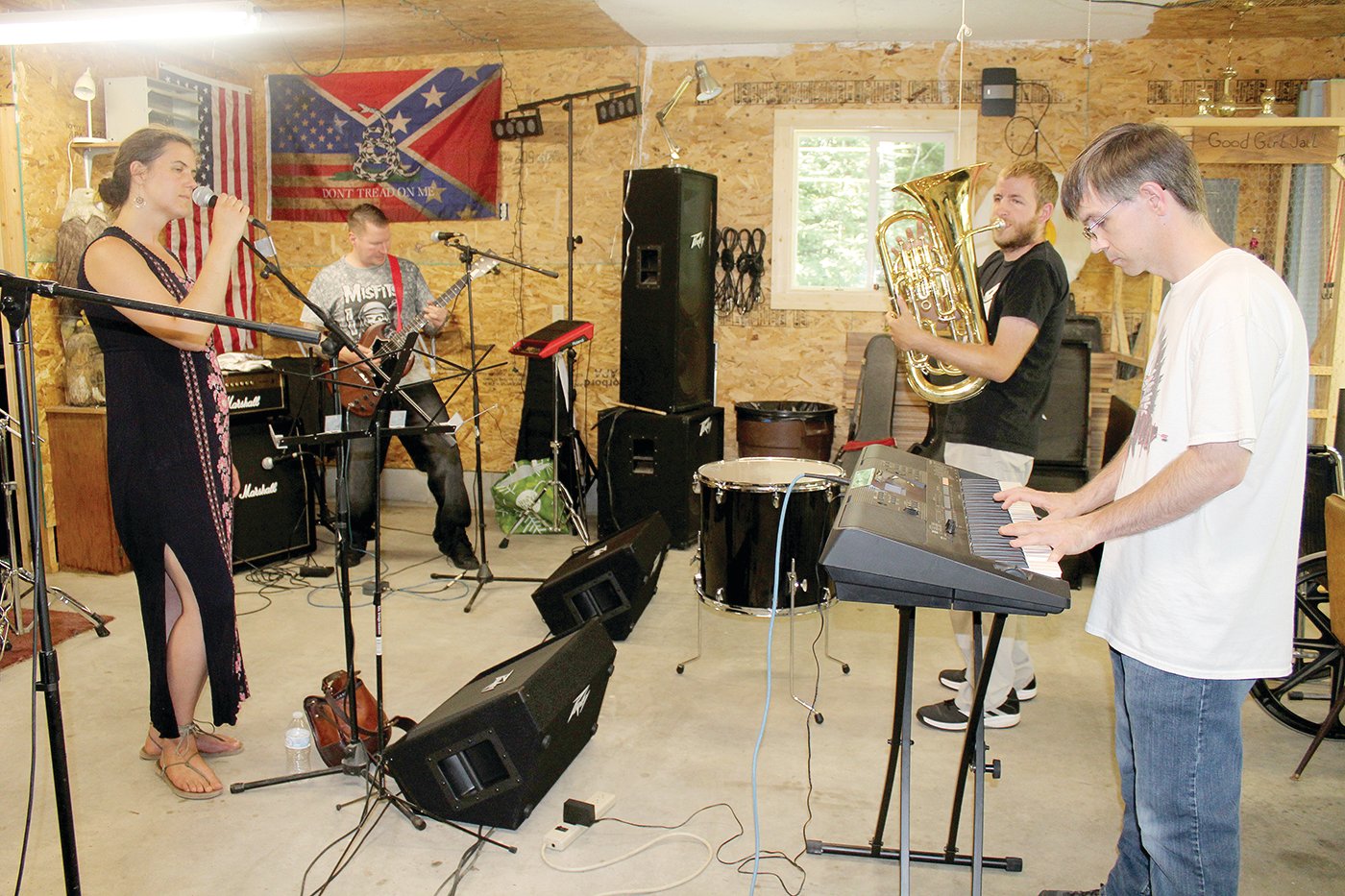 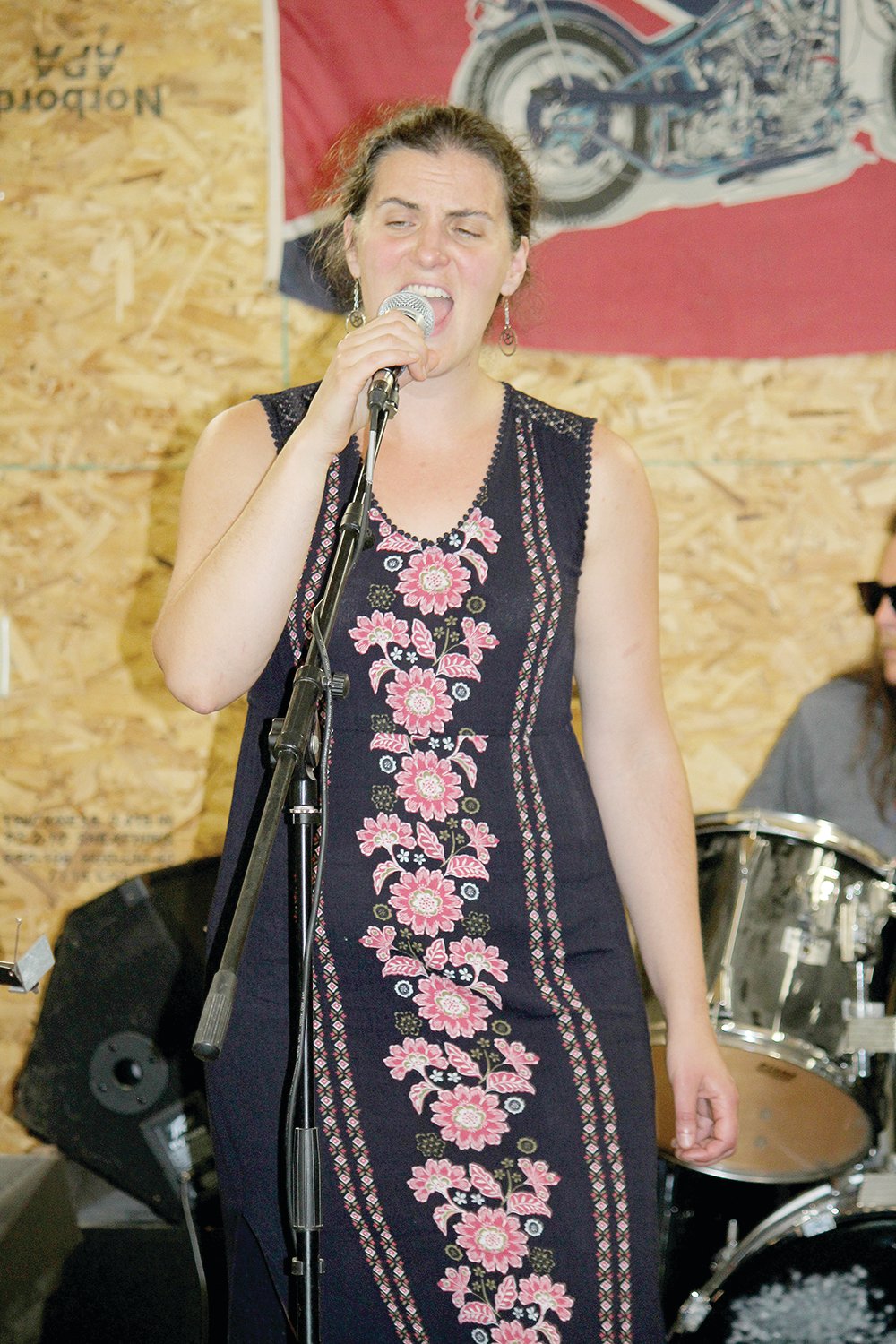 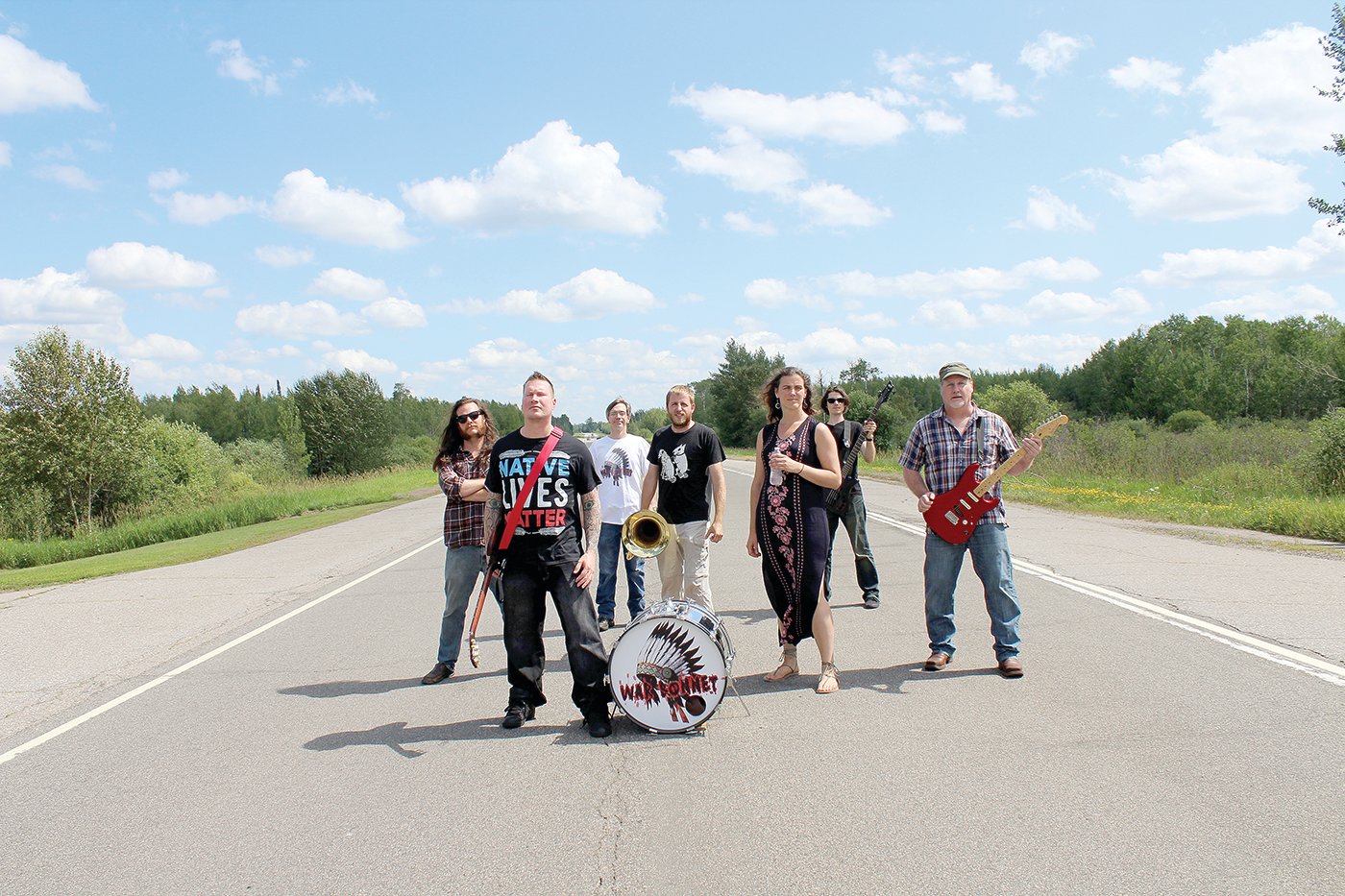 “We’re going to bring a lot of emotion to our show. We’re connected to this land.””
Chaz Wagner, War Bonnet

NETT LAKE – A band bound to the North Country will be gracing the stage at Wild Waters Music Fest in Duluth next week. Native to Nett Lake, the band War Bonnet is a natural fit in the concert lineup. Wild Waters is part of a campaign to protect the Boundary Waters Canoe Area Wilderness, located near reservation land.
War Bonnet is Chaz Wagner, 42, of Nett Lake and Tony Parson, 43, of Buhl. The two write all their own material, drawing from personal experience and passions.
“We’re going to bring a lot of emotion to our show,” Wagner said. “We’re connected to this land.”
Wagner said War Bonnet’s involvement in the Wild Waters Music Fest is befitting, as the Boundary Waters are in territory that originally belonged to Minnesota tribes, but was later ceded to the United States through the 1854 Treaty.
Parson explained the festival is tied to the heavily-debated copper-nickel mining controversy.
Wild Waters Music Fest is an environmental awareness effort created in part by the Campaign to Save the Boundary Waters. The campaign, led by Northeastern Minnesotans for Wilderness, aims to educate people about the effects of proposed sulfide-ore copper mining near the Boundary Waters and its watershed.
“It’s too much to risk, if something goes wrong, and it probably will,” Parson said. “It’s just the wrong spot to have a mine. Copper-sulfide isn’t like steel or iron ore mining.” Parson voiced concern that the companies planning to mine the area are not local and do not have to live with the consequences.
“We’re not anti-mining; our dads worked in the mines,” Parson said. “The festival is to raise awareness about the dangers of mining.”
Wagner said the one message he most wants to give listeners is to honor the earth.
“In today’s society we create so much pollution and cause so much harm to the environment. We should really look back to the past and what Native Americans were doing for answers on how we can be more ecofriendly,” Wagner said.
War Bonnet is one of nine Minnesota artists and groups selected to perform at Wild Waters. The band will be joined by five other musicians who make up the War Bonnet performance ensemble. Joining Wagner and Parson on stage will be vocalist Becky Frichek, Eric Krenz on lead guitar, bassist Sean Zarn, Tom Frichek on drums and Alex Mehne playing euphonium. Wagner said each member of the ensemble has a personal connection to the land and the Bois Forte reservation.
“Out of all the great bands in Minnesota, they chose us,” Wagner said. “It’s an honor.”
The festival takes place on Friday, Aug. 16 at Bayfront Festival Park in Duluth. Tickets are $33 and can be purchased through TicketMaster.com. A portion of ticket proceeds will be distributed to Northeastern Minnesotans for Wilderness.

Beyond the Boundary Waters
Topics of War Bonnet’s music extend beyond wilderness protection. The yet-to-be released song “Ikwe” brings awareness to the current issue of missing women in the U.S. and Canada. “Ikwe” is the Ojibwe word for “woman.”
Wagner explained although the “Ikwe” video was shot in Nett Lake and shows images of indigenous women, the song and video are meant to bring awareness to missing women everywhere.
“It’s going to feature some of the indigenous women who are still missing today and some that have passed on. It’s going to be really emotional,” Wagner said.
Diversification is a key component in War Bonnet’s lyrics. The band has used some Ojibwe, as in “Ikwe,” and also incorporates Lakota in other songs. Presently, the band is working on collaborating with Ojibwe rapper, WahWah Tay.
“Music speaks universally,” Wagner said. “It’s really not about being Native or not Native, it’s about being human.”
“Ikwe” will be released on the next album scheduled for completion by the end of 2019. Wagner said War Bonnet, along with their performance ensemble, will debut ‘Ikwe’ at the Wild Waters Music Fest.

Instrumental inspiration
War Bonnet has pioneered a new sound different from any other genre of music. The band describes their music as “indigenous rock.”
Wagner said War Bonnet’s music can fit into rock, folk, new-age and Native fusion among other genres. Activist, poet, musician and actor John Trudell remains a major influence in their music.
“It can be complex…there’s a lot going on,” Wagner said.
Rhythmic instrumentals, organic vocals and electronica are some elements found in the War Bonnet sound. Parson said their first album, “The Ghost Dance,” helped them create their sound, and the second album expanded on that creation. Parson vocalizes primarily in the studio but is working on incorporating his voice into more live performances. He also plays keyboard. Wagner provides lead vocals and rhythm guitar.
“Our next album is going to eclipse ‘The Ghost Dance,’” Wagner predicted.
War Bonnet’s message embodies a balance between celebrating Native American heritage and bridging the gap between communities with music. Wagner said it is important for people to have pride, but to also celebrate differences.
“I would gauge our success by the shows we play and our audience reception,” Wagner said. “It’s been amazing. When people come to see us it’s not what they expect at all but they come away with some feeling of pride.”
“And self-empowerment,” Parson added.
War Bonnet’s music can be found on YouTube. Their songs are also included in the KBFT radio lineup at 89.9 FM where Wagner is a project manager.