LAKE VERMILION— In the midst of a challenging spring, it was high water, rather than ice, that posed the biggest challenge to anglers here hoping to hit the lake for last Saturday’s … 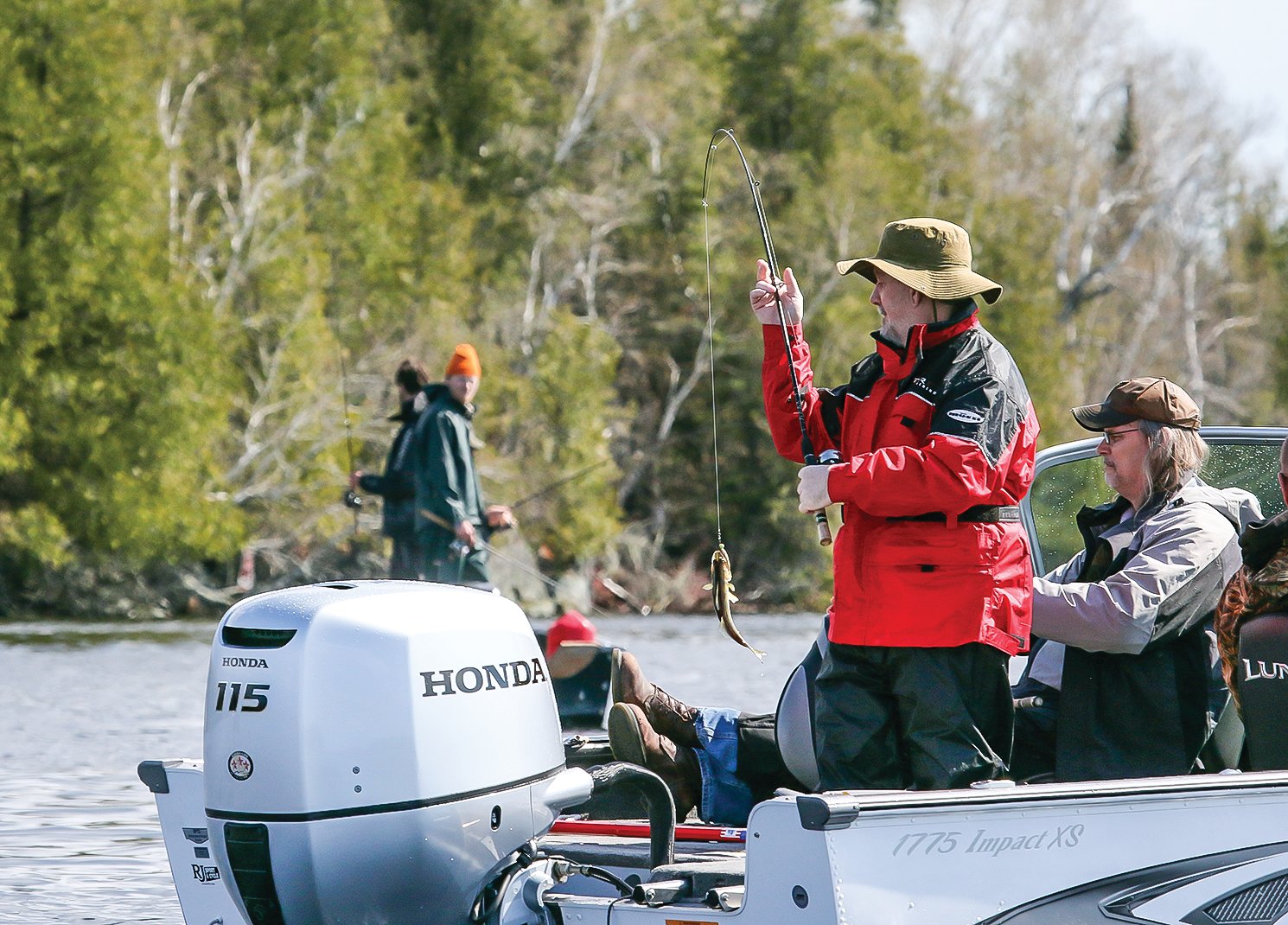 An angler near Fectos Point lifts a little walleye that was quickly returned to the water.
M. Helmberger 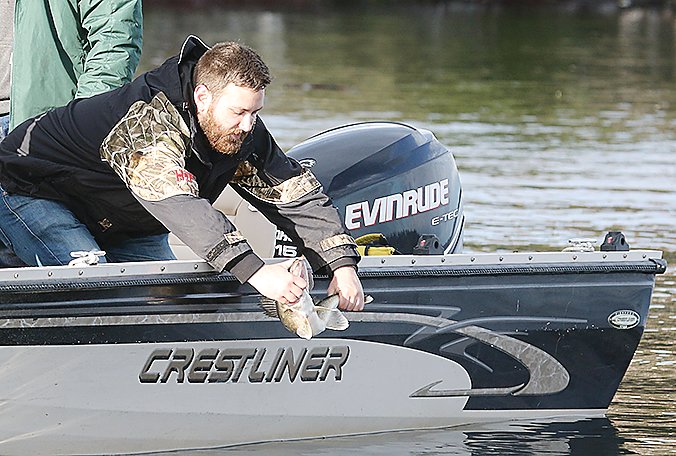 Just off Birch Point, an angler releases a nice walleye that landed within the protected slot limit.
M. Helmberger 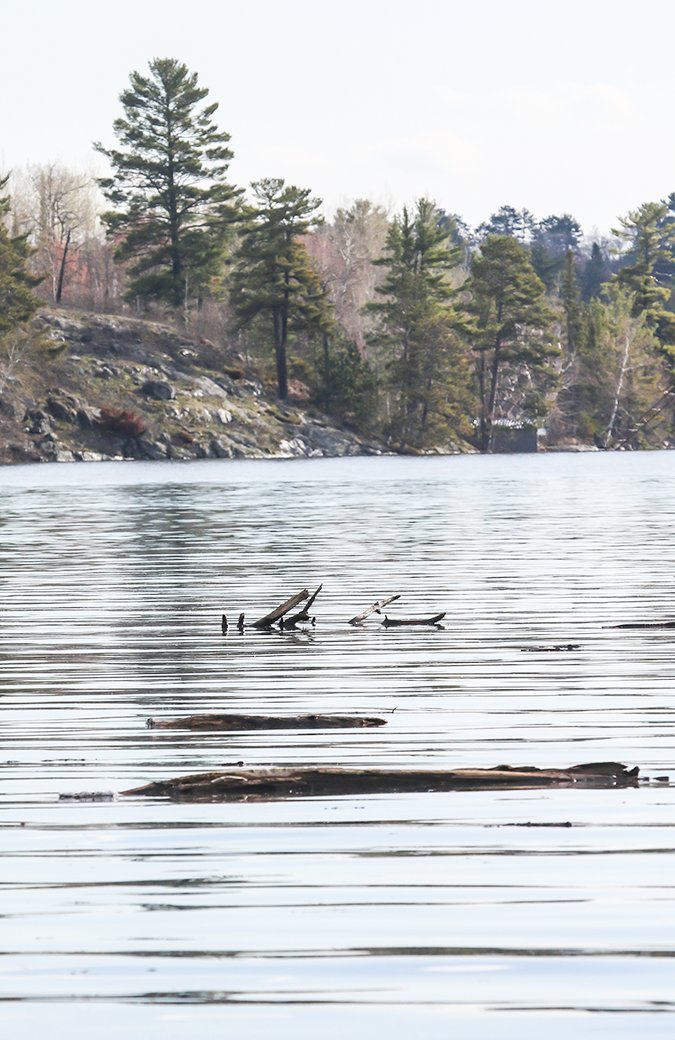 Debris, mostly logs, floating in the water in Frazer Bay. The recent flooding has brought large amounts of debris into some area lakes.
M. Helmberger 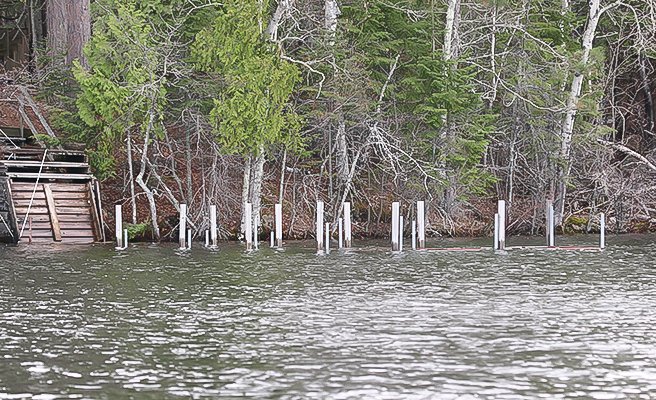 The posts from one of many underwater docks on Lake Vermilion.
M. Helmberger
Previous Next
Posted Wednesday, May 18, 2022 9:15 pm

LAKE VERMILION— In the midst of a challenging spring, it was high water, rather than ice, that posed the biggest challenge to anglers here hoping to hit the lake for last Saturday’s fishing opener.
As has become something of a tradition, my friend Rob Bryers and i headed out on opener morning just after 7 a.m. This time, however, we buzzed off from the dock at the Birch Point public landing, since his dock, located next to the landing, is currently several inches underwater.
We made our way to our typical first stop, just off the northeast tip of Birch, a well-known and popular early season spot where we typically join a cast of thousands (okay, maybe a few dozen) on a pleasant opener morning.
“Where is everybody?” asked Rob as we pulled in to find just one other boat bobbing in the usual spot offshore.
We weren’t sure what to expect as we dropped our jigs and fatheads into the water. Unlike many anglers on opener, we had plenty of bait. Rob’s a longtime fishing guide and has been trapping his own minnows for years, helping to avoid the ongoing escalation in the price of bait.
I still remember Bob Cary’s 1980 run for president on the Independent Fisherman’s Party label. The high price of bait was one of his top campaign issues. It didn’t catch on in 1980, but I think Cary was just ahead of his time. At some bait shops in the Twin Cities ahead of this year’s opener, minnows were selling for as much as $12 a dozen. That’s a buck a minnow, for those who never learned simple division. Cary must be turning over in his grave.
But I digress.
A tug on the line woke me from my reverie on bait inflation. It was a nice 16-inch walleye, the first fish of the morning, which, as usual, put Rob in a funk. He reminded me that I had boated the first fish last year as well, while he caught almost every other one the rest of the day.
Moments later, the other boat off the point, pulled in a gorgeous walleye that fell in the protected 20-26-inch slot, so after a quick round of photos, it went back in the water. Turns out one of the guys in the other boat was also a guide out with friends from the Cities and we started chatting while tending our lines. He shared our theory that the high winds, which damaged many docks, boathouses, and shore stations on the lake as the ice went out along with the exceptionally high water, had kept many folks off the lake for opener. Getting boats on the water wasn’t the only challenge. Dock fishing was largely impossible as well for many since most docks on the lake were either damaged or underwater.
After a dry spell at our first stop, I suggested to Rob that we head to Frazer Bay. We’ve had luck there in the past on opener and I’ve had my best luck with the camera there as well, since it’s usually a popular spot. After all, I was here to report the news, as well as pull in walleye, so I was looking for likely photo opps of anglers filling their live wells.
The scoot over to Frazer proved a bit more harrowing than usual. The ongoing flooding hasn’t just left the lake full of water— it’s left an astonishing amount of debris, ranging from small branches, to entire trees, floating on the water. Multiple times, Rob had to veer left or right to avoid logs or dock decking as we made our way. “I wouldn’t want to be out here after dark,” said Rob. Adding to the hazard is that rock piles normally exposed are now underwater, or barely visible. And don’t expect buoys… they weren’t out as of opener and if they’re on the usual rock piles, they won’t do much good anyway. At least until the water level recedes, heading out on Vermilion is a venture into the unknown.
Along the way, we did find a concentration of anglers in the usual spot off Fectos Point, but Rob figured it was about a third the number of boats as in a typical opener. We found Frazer Bay nearly empty, except for all the floating debris, which seemed to have collected in the bay’s southwest end. Rob picked up a walleye as we dropped our lines on the sand flats on the west end of the bay, but that was it, so we moved to another spot, closer to the public landing.
That’s where we found the best action of the morning, in about 35 feet of water. They were mostly little ones, though we still hooked enough eaters along the way to put our limits in the live well by about 9:45 a.m.
We eventually headed over to a spot on the south shore of Pine Island that is one of Rob’s early season favorites. He likes it, but I can’t say we’ve ever caught fish there when I’ve been in the boat and this time was no exception. We abandoned it after striking out, and headed over to Moose Island, another early season spot that we had to ourselves. It seemed the morning bite had faded by then, and with the wind picking up, we opted to call it a success and head home, where we both had fresh walleye dinners on the agenda for that evening.
If there’s a nutshell here, it’s that the conditions may be challenging right now on Vermilion, but the fishing is tough to beat. So, hit the water if you can, but take it easy and be safe. And don’t forget to wear your life vest.