REGIONAL – Losing the family dog can be the loneliest feeling in the world, and the most daunting situation a pet owner will ever face.

But there is help, including right here in the North … 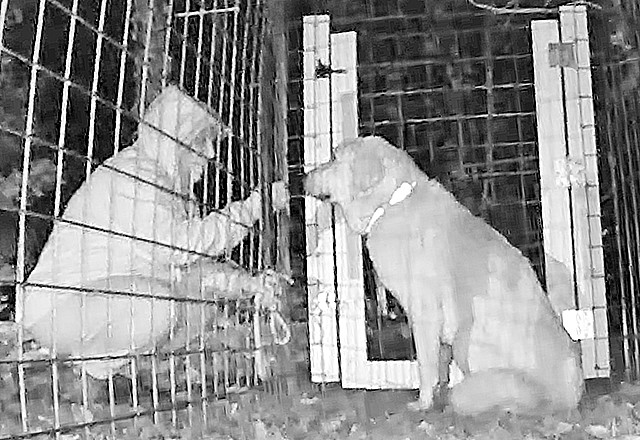 REGIONAL – Losing the family dog can be the loneliest feeling in the world, and the most daunting situation a pet owner will ever face.

But there is help, including right here in the North Country.

The Retrievers is an all-volunteer team with the tools, experience and expertise to help individual owners find their lost dogs. Based in Minneapolis, the group has the resources to help organize an effective search, and through free consultation, experienced team members offer advice on strategic decisions as the search unfolds.

Their specialty is capturing skittish dogs, and they can be especially helpful once a missing pet has been spotted and is remaining in the same general area.

Lisa Foss of Ely is one of 10 caseworkers on The Retrievers team.

She told her story of a recent capture in the Tower area.

Sasha went missing from her new adoptive home west of Tower. Her new parents thought she would love her new home in the country. “They were never told by the shelter personnel that she would need to be on a leash until she could be taught this was her new home,” Foss said.

“A worker at the Humane Society where Sasha was initially adopted was talking to my coworker, and she suggested he fill out a request for assistance from the Retrievers on our site,” she said. “He did that a few days after Sasha went missing, and I went out to set up my remote cam the next day. That worker has since joined The Retrievers.”

According to Foss, Sasha was let out to potty, but decided to start roaming the area. A camera was aimed at her kennel, where she was spotted right away. The next day a trap was put up in the family’s yard, along with intersection signs, and online and paper flyers. She never came back.

Many “lost dog” posters were posted at road intersections in the area, Foss explained. “One type is preprinted where we attach a photo and phone number, and the other is handmade using bright neon paper,” she said

“The next time she was spotted was in Soudan, east of Tower,” Foss said. “More intersection signs were deployed. Calls started coming in almost immediately about a big white dog that would run whenever anyone even looked at her.”

Sighting reports came in from Eagles Nest, a region even further east. “I put up a camera in that region as well, and saw her eating from my feeding station, so the trap was put up in that spot. I only saw a red fox who lives there.”

After a day, Foss said Sasha was spotted back in the Tower and Soudan areas. “I took the trap down, and waited to see if she would settle down enough to put it up again. Then she was back in Eagles Nest for a day or two, and then back to Tower.”

After figuring Sasha’s habits, Foss elected to put the trap back on a property adjacent to the second location. “I loaded it up with “puploaf” (rice, bacon, cheese and burger) and parked my car about a quarter of a mile down the road.” She was visited by many deer strolling around.

“Suddenly several deer shot past my car in a panic. I looked around to see what startled them, and there was Sasha, strolling past my car,” Foss said. “I had sprinkled Liquid Smoke from the trap to my car earlier, and her nose was taking it all in.”

Within five minutes, her phone started receiving texts from the folks next door that they heard the trap door shut. “I raced up there, and there she was. A video camera I had set up at the site shows how calmly she walked in. The door slammed and startled her, but once she realized nothing was hurting her she went right back to eating. She’s now with a family and animal friend who all love her dearly.”

The Retrievers is a Minnesota-based all-volunteer non-profit organization dedicated to providing lost dog support services for rescues and individual dog owners. They got their start as members of the Lost Dog Rapid Response team for Retrieve a Golden of Minnesota (RAGOM), the nation’s second largest Golden Retriever rescue organization.

In 2014, the group founded the Retrievers, an independent volunteer group whose nucleus consists of veteran members of the RAGOM lost dog team. Many  team members have several years of experience, dealing with shy, skittish dogs. Some have fostered, rehabilitated and even adopted dogs from puppy mills, hoarding situations and extreme neglect situations.

Their experience has taught them how to behave around and approach a dog who is distressed and scared of humans—the most difficult kind of dog to catch once they’re on the loose.

They offer free phone consultation to individual owners and rescues whose dogs have gone missing.

If a team member of the Retrievers is available, they will help a pet owner catch a skittish dog provided the following criteria are met:

The dog is routinely visiting a feeding station or other localized area. Setting a trap is only effective when it can be placed in the dog’s path. If the dog is not remaining in the same general area, the Retrievers will not be able to help trap it.

Pet owners agree to provide a refundable $500 deposit for the use of the group’s equipment, less a $10 processing fee.

The capture site is located within an hour’s drive of one of their trapping-qualified team members. The team is located primarily within the Twin Cities area, but they do have some team members, such as Foss, in other parts of the state.