Survival much improved in second year of moose study

REGIONAL— Back-to-back severe winters may have been a challenge for northeastern Minnesota’s whitetail deer population, but it appears the difficult weather has improved survival of the …

Survival much improved in second year of moose study 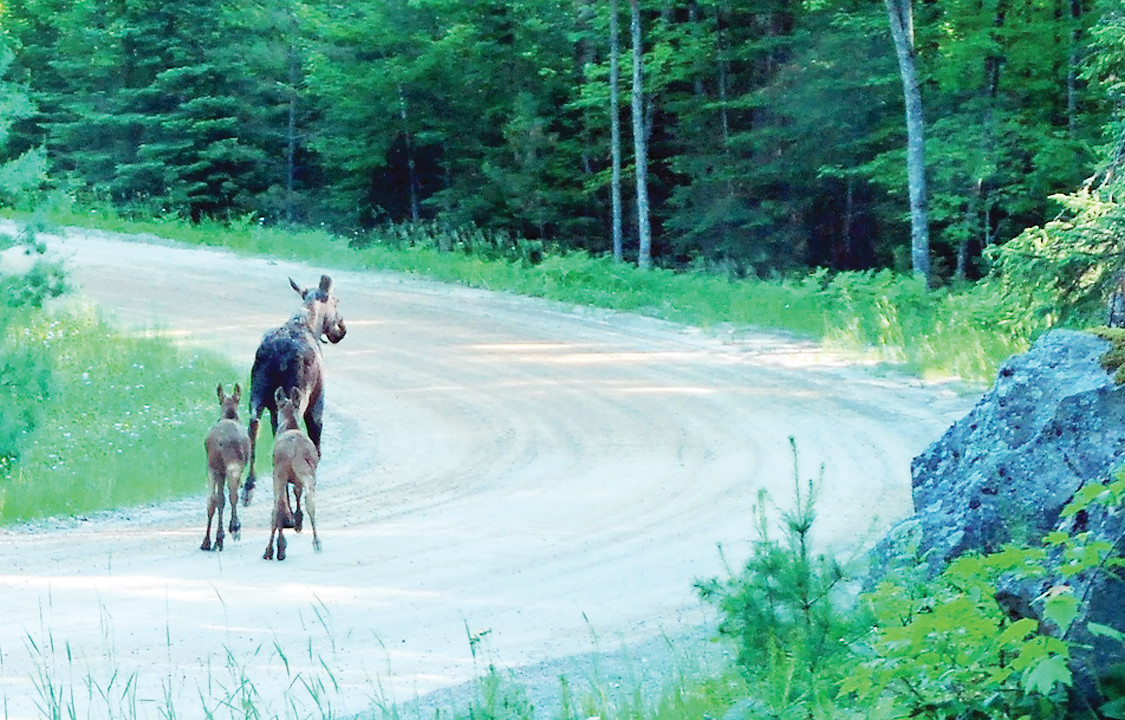 A moose cow and two calves trot along the Echo Trail north of Ely. Moose survival has improved this year, perhaps due to recent severe winters.
Terry Jackson
Posted Friday, September 5, 2014 11:00 am

REGIONAL— Back-to-back severe winters may have been a challenge for northeastern Minnesota’s whitetail deer population, but it appears the difficult weather has improved survival of the region’s moose herd.

That’s according to the findings of ongoing moose research by the Department of Natural Resources. The latest findings, which utilize data biologists have collected over the past two years, show much-improved moose survival in 2014, compared to the winter of 2012-13. “Thus far in Year 2 (from capture in early February to June 30, 2014) moose survival is two times higher than the same time period in Year 1,” state the researchers in a report obtained by the Timberjay.

Out of 104 adult moose included in the second year of the radio collar study (which runs February 2014 to February 2015), only seven had died as of June 30, reflecting a survival rate of 93.4 percent. By contrast, only 80 percent of the moose in the first year of the study survived. While several months are still remaining in the second year of the study, roughly two-thirds of the moose can be expected to die during the March-May period, according to the research so far, so most of the mortality has already likely occurred as of June 30. Typically, in North America, between 88 and 92 percent of adult moose survive in any given year.

Biologists have speculated that milder winters in the mid-2000s had undermined moose survival in the region, since they allowed a heavier build-up of parasites, particularly winter ticks, as well as brain worms and liver flukes, both carried by whitetail deer.

But the string of severe winters seems to have eased those concerns, at least temporarily. The researchers report that winter tick infestations appear to have declined noticeably in the moose they have inspected for their study. “It appears…the prolonged winter 2013 may have suppressed winter tick numbers, as we have not reported any winter tick mortalities during winter 2014,” stated researchers in their report. By contrast, three of the 21 moose deaths (or 14 percent) in the winter of 2013 were related to winter ticks.

According to researchers, winter tick populations vary significantly, depending on the severity of late winter weather. The ticks generally drop off of moose and other hosts in late March or April and their survival increases significantly if they fall onto bare ground, rather than a snow-covered landscape. So longer winters that continue well into April can reduce winter tick survival substantially— and that’s apparently what happened as a result of the prolonged winter in the spring of 2013. The late spring in 2014 could well extend that same beneficial trend for moose heading into next winter.

At the same time, the scientists note that the severe weather significantly reduced whitetail deer numbers, which should lessen the exposure risks to moose from the brain worm, known as P. tenuis, as well as liver flukes, both of which are carried by whitetails.

As of June 30, only one moose out of the 104 in the study’s second year had died from the effects of the brain worm, and none from liver flukes. During the first year of the study, researchers recorded six moose deaths from either winter ticks, brain worm, or liver flukes.

At the same time, wolf predation appears lower as well for moose in the second year of the study. So far, just four moose have died from wolf attacks, three immediately and one as a result of subsequent infection. Two additional moose deaths occurred as a result of an accidental drowning and an apparent kidney disease fatality.

The lower rate of predation could reflect the improved health status of the moose this year. Among moose examined during capture in February, 16.7 percent were classified as thin, 58 percent as normal, and 25 percent as fat. By contrast, in the first year of the study, a third of all moose captured were classified as thin, or very thin. None of the moose this year were rated as very thin.

While the latest study results are encouraging in the short term, the connection between winter length and moose survival puts the long-term existence of the species in Minnesota in question. While the state has seen two recent severe winters, the long-term trend has been in the opposite direction as the state’s average winter temperatures have been steadily climbing for the past two or three decades. Climate scientists expect that trend to continue, or even accelerate as a result of rising global emissions of heat-trapping gases, such as carbon dioxide, methane, and others.