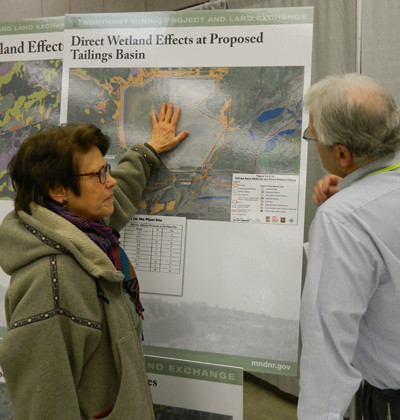 A member of the public asks questions about wetland impacts from the proposed mine during a recent open house on the SDEIS.
Max Helmberger
Posted Wednesday, January 22, 2014 11:00 pm

REGIONAL—Even as thousands of Minnesotans are weighing in on the newest draft environmental impact study of PolyMet Mining’s proposed copper-nickel mine, near Hoyt Lakes, both state and federal officials are weighing the possibility they will need to redo one of the key portions of the 2,200-page analysis.

That prospect could substantially delay completion of the Supplemental Draft Environmental Impact State, or SDEIS, and push any talk of mine permitting into next year, at the earliest.

At issue is the amount of water that flows through the area affected by the proposed mine, which sits near the headwaters of the Partridge River, a tributary of the St. Louis River. In determining the mine’s effects on water quality, the “base flow” rate for the river is a key variable, but it’s one for which agencies like the Department of Natural Resources do not have reliable data. The DNR is one of three “lead agencies” on the latest version of the PolyMet SDEIS, along with the U.S. Army Corps of Engineers and the U.S. Forest Service.

The U.S. Geological Survey does maintain a river gauge about 17 miles downstream of the mine site, but to determine flow rates at the mine location itself, PolyMet and its consultant on the study relied on a model to estimate the flow further upstream. Those results were incorporated into the water quality model that was used for the environmental study now up for public comment.

But the modeled flows used in the report, particularly during low flow periods in winter, appear to be much lower than actual data that the DNR has since gathered from the field. Indeed, the SDEIS makes reference to those discrepancies in one of its hundreds of charts. That chart, found on page 4-67, shows that the model used by PolyMet underestimated low flows during winter by as much as a factor of five in many cases.

Steve Colvin, who is coordinating the study effort for the Department of Natural Resources, said it’s unclear how the discrepancy might have affected the water quality results of the study. Some officials have argued that higher flows would result in more dilution of mine discharges, but others have argued that more water flowing through the system could also disburse more contaminants.

Colvin acknowledges that the uncertainty over the issue is a concern. “We realize this is an important and legitimate issue,” he said. Colvin said the DNR also has better data now on groundwater quality at the mine site than were used in the SDEIS.

Still, he said, no decision has yet been made on whether the SDEIS will require a major revision before a final SDEIS can be issued. “We’re having discussions about if, or how, to include all these things in the final,” he said.

DNR hydrologist Mike Liljegren said it is “more than likely” that a new water quality model will need to be developed before a final version of the SDEIS can be issued. And new modeling on water quality could well impact other results in the study, requiring new runs of the other models in the SDEIS. “The base flow is really the catalyst for everything,” said Liljegren.

It’s unclear how long such a major revision might take, but Colvin said it is not something that could be done quickly. “It’s not an easy model to run. It takes time.” If a new model is run, said Colvin, officials from the lead agencies and PolyMet will likely want to update all the key parameters for which they have additional information. “Probably a significant chunk of time would be spent in developing all those different parameters,” he said. The lead agencies might even want to collect another season’s worth of flow data from the Partridge River to supplement the single season of data they have collected so far. Both Colvin and Liljegren acknowledged that a longer period of data collection is more reliable, given the weather-related factors that can influence stream flows. Much of the affected area was in various stages of drought for most of 2012 and 2013, according to the U.S. Drought Monitor, which could have affected measured flow levels. “Those are all considerations we’ll have to make in going forward,” said Colvin.

For more than five years, beginning in 2008, scientists representing the state’s Indian tribes have been telling officials with the lead agencies that the base flow numbers that PolyMet was using in their model were far too low, and that any results stemming from it would be inherently unreliable. Essentially, they said, “garbage in, garbage out.”

In a March 2, 2012, letter to the DNR and the Army Corps, John Coleman, Environmental Section Leader for the Great Lakes Indian Fish and Wildlife Commission, laid out the concerns of the commission’s water quality experts. “It is unlikely that any accurate predictions of water movement, transport of contaminant mass, or contaminant levels can be made when the characterization of the hydrologic system is so out-of-kilter,” Coleman wrote.

Nancy Schuldt, Water Resource Policy Director for the Fond du Lac band, agrees. “If, at the core of your information base, you get one thing really wrong, it affects everything down the line,” she said.

Schuldt, like many water quality professionals representing the tribes, expressed frustration that their critiques have not been taken seriously in the process. Indeed, the SDEIS includes a discussion of 18 major differences of opinion between experts from the tribes and those from the lead agencies.

But the DNR’s Colvin disputes the contention that tribal concerns have been discounted. “We have taken them very seriously,” he said.

The relationship between the tribes and the lead agencies has improved in at least one respect. In 2009, the DNR and Army Corps refused to allow the tribes to take part in open houses during the comment period for the first draft study. This time, the tribes have been allowed to present their own perspective. “We’re happy about that,” acknowledges Schuldt.

Tribal experts are also pleased that the lead agencies are finally acknowledging the discrepancy on the water flow data, and see it as a vindication of the concern they have been raising on the subject for several years.

Issue attracting notice from mine opponents

Discrepancies in study data frequently provide openings for critics to raise doubts about the validity of such an analysis. And opponents of the proposed mine have already zeroed in on the differences over the rates of water movement through the mine site.

Betsy Daub, policy director for the Friends of the Boundary Waters, said the stakes are high and that getting the model right is critical, “no matter how long it takes.”

Daub said the differing data “speaks to how very complicated and fraught with risk these types of projects are.” She said the amount of water flowing through the mine site will determine how quickly and how far potential pollutants are carried away from the site. “It can also affect how much water the water treatment plants may have to deal with.”

Officials with the lead agencies, and even PolyMet, are well aware that the adequacy of their environmental study could well be challenged in court— so everyone involved has a key interest in getting it right.

“We’ll want to see what the DNR would like addressed,” said PolyMet spokesperson Bruce Richardson. “We’ll support the gathering of additional information if that’s required.”

Richardson said the company would not comment specifically on the concerns over water flow discrepancies, at least until the public comment period is completed. “At this point, gathering feedback on the data in the SDEIS is what this is all about,” he said.

Daub said the way in which the company and the lead agencies proceed will say a lot about their commitment to environmental protection. “If they decide to go back in and take another look, that speaks very highly of the agencies’ commitment to doing it right.

“If they did not go back and fix these issues, that would not be a good indicator of the state’s willingness to do its best,” she added.