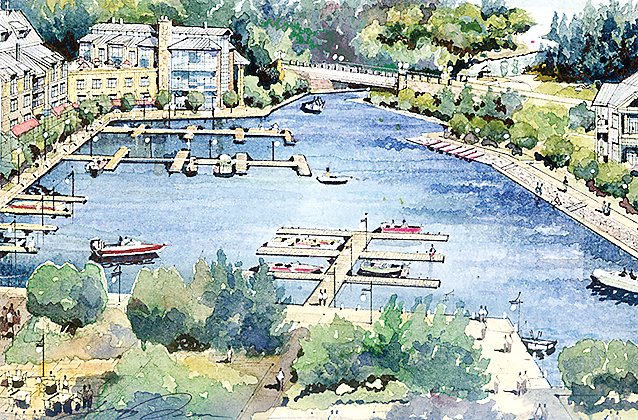 The original concept drawings at the Tower Harbor, show a highly walkable mix of commercial fronts and upper- level residential. With the shelving of the town home proposal, a new plan could come closer to the original vision.
submitted 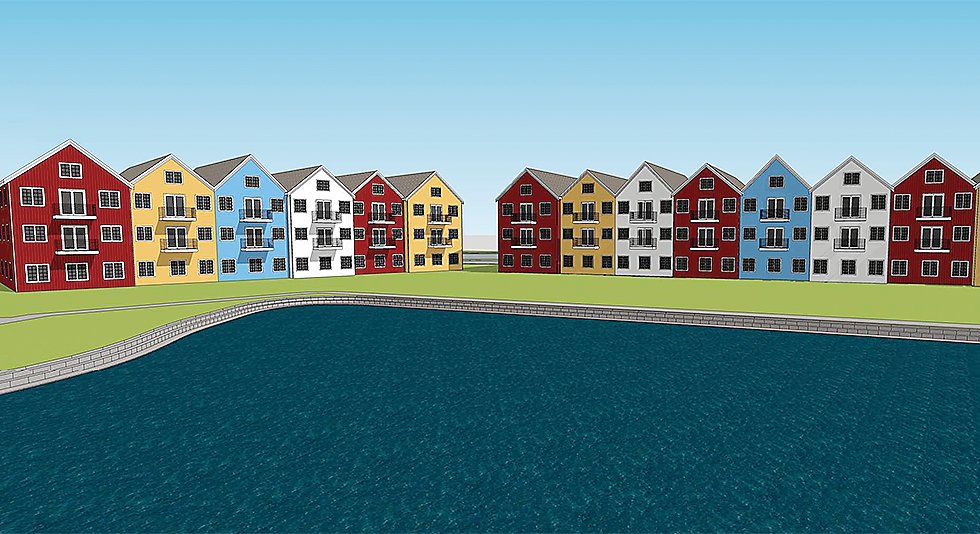 An architect’s rendering of a revised harbor concept being developed by Tower Harbor Shores.
submitted 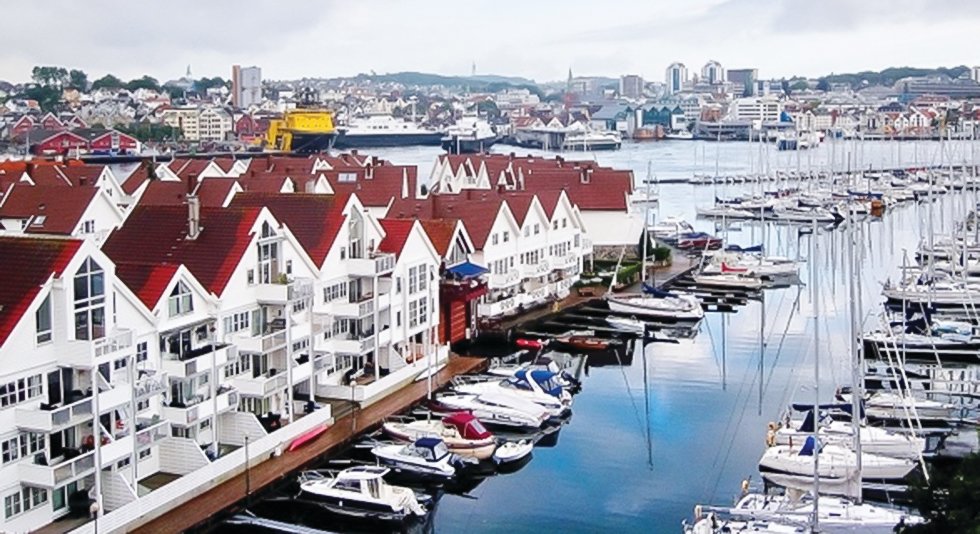 TOWER— The long-planned town home project slated for construction at the Tower Harbor appears dead, nearly six years after city officials pushed for the development project. The Tower Economic Development Authority (TEDA) took steps at their meeting on Aug. 4 to cancel the agreement, although it will be at least early November before the agreement can be officially scrapped unless representatives of Tower Harbor Shores agree to mutually end the agreement earlier than that.
Tower Harbor Shores representative Orlyn Kringstad and the company’s new architect, Ryan Arola, of Duluth, had prepared a presentation for TEDA on the town home project which also outlined a modified concept that would substitute smaller and more affordable condominiums, as well as provide some ground floor commercial space at the harbor. Concept drawings and initial floor plans, provided to the Timberjay, show a development much closer to the original vision for the harbor, which was for mixed residential and commercial development near the waterfront. But the TEDA board, at the urging of board member Joe Morin, refused to hear the presentation.
Kringstad, speaking under public input after his presentation was dropped from the TEDA agenda, provided some insight into the situation with the town home project. He said dramatic cost increases, fueled by a number of inflationary factors sparked by the COVID pandemic, had pushed the pricing for the town homes to an unrealistic figure.
Kringstad expressed disappointment with the TEDA board’s refusal to hear his presentation.
“We found a way to make this project work and not only work but work better than it would have worked with the 12 town homes which we were limited to,” he said. “So, I think it’s a great disservice if you stop the project at this point, with all of the investment and the work that has gone into it developing this.”
Morin responded to Kringstad. “I don’t think anybody here, including myself, has ever said anything about stopping development completely down at the harbor,” he said. Morin said he liked the concept that Kringstad was proposing. “This is a great left turn,” he said. “All I’m saying is let’s get rid of that contract and then let’s work through a proposal, get buy-in from TEDA, and then develop a new contract that we can all live with. And let’s get building down there. I think where you’re going with all these materials and the economics of it and having even more living space and residential is what we all want.”
But Morin said the current contract should be scrapped, rather than handled through an amendment that extends timelines and modifies the scope of the project. He complained that he had been called an “obstructionist,” but said he wanted to go by process. “I just want to be transparent,” he said. “I want to cease doing one thing and start doing another thing.”
Kringstad said he had hoped his presentation could be a first step in advancing a transition to “a development that you all say you want.”
It’s not yet clear how that transition might evolve. In later discussion, Morin said TEDA might opt to issue an “RFQ” to see if other developers might be interested in the site. “We’re going to have to decide,” he said.
Board member Miranda Kishel suggested that the board begin a new planning effort “from square one,” possibly starting with a new request for proposals. Morin agreed and indicated that a new development plan may not include Tower Harbor Shores. “In my mind, and I don’t know if the rest of you agree or not, Tower Harbor Shores is not a shoo-in in the harbor, necessarily, today, if that contract goes away.”
“If that’s the case, we need to honor this contract the way it was written,” said board member Victoria Carlson. “We give them their 90-day summons, then we need to issue the RFP, so they can apply and whoever else can, too. Going forward, whoever it is, I think we learned some lessons.”
A long road
The apparent demise of the town home proposal was the end of a nearly seven-year saga that began in late 2015, when the city’s now defunct harbor committee issued a request for qualifications from architects and developers who could provide development services, with the harbor committee serving as the lead developer. The committee received four replies, but ultimately selected the proposal assembled by Orlyn Kringstad, who told the council he hoped to reinvest profits from the first project to undertake other developments in Tower.
The city and Kringstad’s group, initially Tower Vision 2025 but later Tower Harbor Shores, signed a development agreement in early 2016. Complex issues surrounding title to the property delayed the necessary platting for the project for almost four years. Meanwhile, the city had transferred oversight of the project to TEDA. Once platting was completed in early 2021, TEDA and Tower Harbor Shores spent several months revising the development agreement for the town home project, an agreement that, among other things, required the start of construction on the town home project by Aug. 1, 2022.
With that agreement now headed for likely cancellation, the future of development at the harbor remains an open question.