Highlights EA on mineral withdrawal, showcases the next generation of wilderness advocates

Highlights EA on mineral withdrawal, showcases the next generation of wilderness advocates 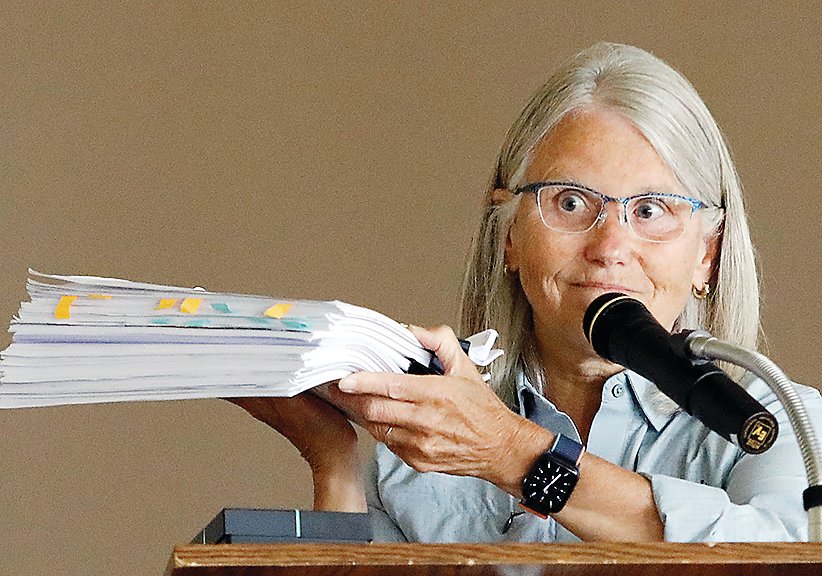 ELY – Members of the Tuesday group received an update this week on efforts to head off copper-nickel mining near the Boundary Waters and met the next generation of potential advocates for wilderness protection.
Becky Rom, national chair of the Campaign to Save the Boundary Waters, offered both the update and the introduction. She started with the June 23 release of the draft environmental analysis of the impact of a 20-year mining ban affecting about 225,000 acres upstream of the BWCAW. Rom appeared to struggle to hold up the weighty document, produced by the U.S. Forest Service.
Rom provided a one-page summary that highlights what the Environmental Assessment identifies as risks of from copper-nickel mining within the watershed of the wilderness. Those risks include:
• Mining of sulfide-bearing ore poses risks because of contamination resulting from accidents, spills and failures of technology that could last centuries or longer.
• Remediation technologies have limited effectiveness.
• Dry stack tailings storage facilities can harm the environment.
• Routine operations and failures of sulfide-ore copper mines could have significant negative impacts to aquatic systems and public health.
• Wilderness qualities and values and the recreation experience would be degraded.
• The low-income population of the three-county Boundary Waters region and the Indigenous community would bear the greatest risk of harm.
• 1854 Treaty resources, including wild rice, are likely to be adversely affected or permanently removed.
• Federally protected wildlife is likely to be adversely affected.
• In an ecosystem already stressed by climate change, sulfide-ore copper mining would cause the loss of additional forested lands and result in new sources of greenhouse gas emissions.
Rom also brought something else to the Tuesday Group gathering. Four young adults who represent the next generation of those who will continue the battle to protect the wilderness from the risks of sulfide-ore copper mining spoke of their passion and love of the North Country and what they feel needs to continue to happen to keep the BWCAW what it has always been, a pristine million-acre wilderness for the next generation. And all the ones after that.

Joseph Goldstein, originally from Illinois, first visited the BWCAW with his family when he was six years old.
“That was 15 years ago, and I’ve been up here every year since then,” he said. He has worked in Ely for the past six summers guiding and outfitting canoe trips into the wilderness with Ely Outfitting Co.
“About nine years ago I became aware of the (sulfide) mining issue and decided I wanted to get involved to save the Boundary Waters,” he said.
He said he became involved with the Campaign to Save the Boundary Waters and has made several trips to Washington, D.C. to lobby lawmakers in an effort to “combat mining.”
He helped form the Kids for the Boundary Waters organization 2018.
“At that time it was sort of a dark time for the (Campaign to Save the Boundary Waters) and I started thinking that what I wanted to do was give other kids the same opportunity and resources that I had to make just as big an impact in this effort to stop the (Twin Metals) mine.”
He was joined by seven other youth for their first trip to the United States Capitol.
“We continue to meet with members of Congress, and officials at the Forest Service, the Department of Agriculture, BLM (Bureau of Land Management), and others to tell them about this place and why we love it so much and the importance of protecting it,” Goldstein said. “It is important not just for our sakes, but for future generations as well.”
As many as 200 different members of the Kids for the Boundary Waters from about 30 different states, and the country of Chile, have been lobbying to save the BWCAW. Their recent Washington, D.C. trip last month involved meeting with officials from the Department of the Interior and the Department of Agriculture.
Three other members of Kids for the Boundary Waters, Rachel Poppleton, Austin Konrath and Kaya Sloman, who also traveled to Washington with Goldstein last month, spoke briefly.

Poppleton, originally from St. Paul, works as an outfitting assistant at Ely Outfitting Co. and has also been a frequent visitor to the BWCAW since she was about five years old.
“In my mind, I wouldn’t even exist, I wouldn’t have been born, if it wasn’t for the Boundary Waters,” she said. “My parents met when they were both counselors at Camp Widjiewagan (near Ely), and if they never met there I wouldn’t be here.”
She said when she “became aware” of the threat of sulfide mining to the wilderness, she signed up to go to Washington with the organization.
“This is where things happen and people make decisions that affect the rest of the world. I had no idea what to expect, and I was pleasantly surprised that a lot of them were actually invested and interested in the work we were doing. Some people actually do care,” she said.

Konrath is from Central Wisconsin.
“My Dad has been an honorary Elyite for nearly 40 years,” he said. “The culture of Ely and the Boundary Waters is heavily instilled in me and my family. My BWCAW journey started several years ago with my first job at Ely’s Canadian Waters outfitter.”
He related the story of a public television interview involving his employer and a co-worker that supported sulfide mining.
“I was steaming mad. I couldn’t believe what I heard. This place is truly indescribable. There is really no place like it,” he said.
Konrath contacted Goldstein to join the effort to protect the wilderness.
“I changed jobs, and I now work for Jason Zabokrtsky at Ely Outfitting Company where I really get to help people experience the Boundary Waters,” he said.
During his recent trip to Washington, D.C., he said he met with various lawmakers.
“These (politicians) are just like us. For the most part, they are open and not just stuck in their ways, except for (Wisconsin Senator) Ron Johnson. He only saw us for about two minutes and didn’t give us much,” Konrath said.
“But we also met with (Wisconsin’s other Senator) Tammy Baldwin, and (Minnesota Sen.) Tina Smith who is going to be our champion in the Senate once our (BWCA protection) bill gets through. They understood our issue and are just as passionate about it as we are.”

Sloman, also from Illinois, confessed to not having as much experience in the Boundary Waters as her friend Joseph Goldstein. “Back in middle school, Joseph was part of a school assembly and was speaking about mining and the watershed of the Boundary Waters and that was the first time I ever heard about this place,” she said.
Sloman soon experienced the BWCAW.
“Joseph dragged me 11 hours north, in mid-October, to go camping for my first time ever. It was quite an experience. It was rainy and cold the entire time. We mostly hid in the tent, but I was able to see the beauty of this place and what it could be when the sun was out,” she said.
Sloman continued, “Most importantly, I saw why Joseph cares so much about this wilderness, and why he put so much effort into starting the Kids for the Boundary Waters.”
Four trips to Washington, D.C. later, Sloman now lives in Ely and works at the Ely Outfitting Company with fellow BWCAW enthusiasts.
“It has been a very rewarding experience,” she said. “The Kids for the Boundary Waters are a force to be reckoned with and you don’t want to get in our way.”

Lots more to explore at the Soudan Mine