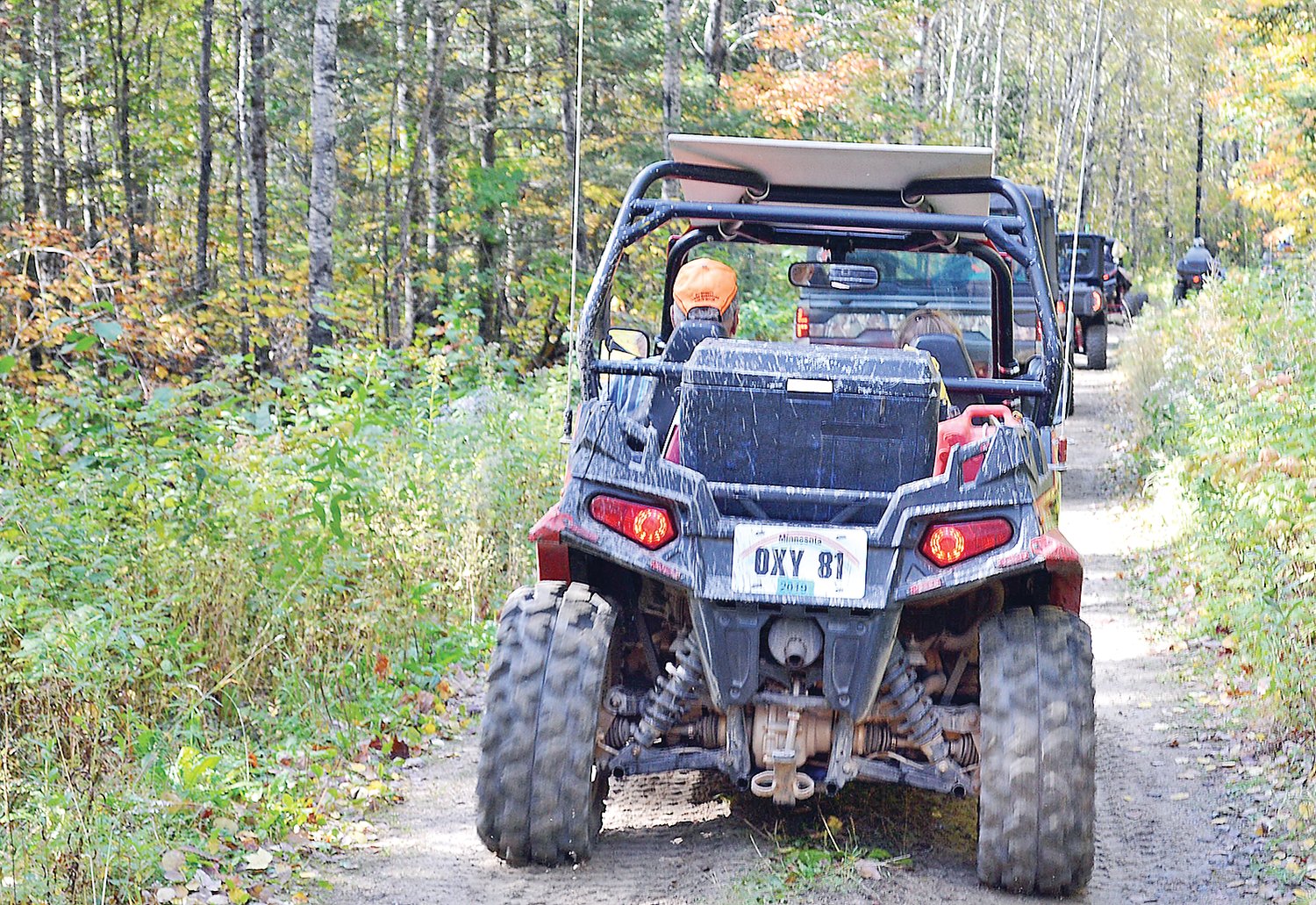 Eagles Nest residents turned out to oppose a proposed ATV that would run through the heart of the township's residential area.
file photo
Posted Wednesday, June 22, 2022 7:15 pm

EAGLES NEST— Residents here had a clear message for the town board on Tuesday: A high traffic ATV corridor through their township will permanently impact a way of life focused on peace, tranquility, and quiet outdoor activities.
It was a message that residents repeated again and again as the board agreed to take input on a proposal by the Prospector ATV Trail Club. It would develop a designated route through the heart of the township’s residential area to provide a shorter connection between Tower and Ely as part of a series of loop trails the club has been developing. The board will take up the question again in a special meeting set for Wednesday, June 29, at 5 p.m.
The controversial trail network, which is part of an effort to turn northeastern Minnesota into a national destination for ATV riders, has faced growing concern in parts of the region, but nowhere has it faced the level of opposition seen in Eagles Nest Township, where it appears the overwhelming majority of residents oppose the trail. More than 50 residents packed the small town hall to voice their concerns and they were joined by several dozen more who watched and participated in the meeting over Zoom.
Township resident Bud Van Deusen presented the town board with a petition including 413 names of residents and property owners in the township. That’s out of an estimated 500 property owners in the township, according to the Fire Chief Larry McCray.
“We ask the town board to consider the long-term ramifications of this proposal to residents and the environment,” said Van Deusen, who was one of more than two dozen people who spoke to the board during Tuesday’s meeting. “We believe it’s more of a commercial enterprise, not compatible with our lifestyle.” Van Deusen and others recently organized under the banner of the Eagles Nest Trail Advocacy Group.
Van Deusen stressed that opponents to the trail were not opposed to ATV use by residents, which has never been controversial. “What we’re opposed to is the magnitude of stress that this primary corridor would bring to our community,” he said.
Steve Casey, a resident of Eagles Nest Lake 3, spoke for many in his view of the outdoor pursuits favored by residents of the township. “In my 20 years here, I’ve seen very few jet skis,” he said. “For every jet ski, I see 100-200 canoes or paddleboard users. That’s the spirit. That’s the atmosphere that we have here. And I think one of the reasons you have so many people here and so many signatures is that this is a real affront to that atmosphere.”
There were a handful of voices expressing a different view. Percy White, a Walsh Road resident, said she liked to use her ATV to visit her neighbors and was upset that the issue had left neighbors at odds. “The division is killing me,” she said. “I want to get along with my neighbors.”
But Tim Rund, who had helped to organize the petition drive, rejected the notion that the issue had divided the community. “The community seems to have come together on the issue,” he said, noting the overwhelming consensus in opposition to a corridor trail.
In an effort to address the concerns of residents, the town board had formed a three-person study group tasked with finding alternative routes for the proposed trail that might face less opposition. The group had identified three alternatives, including a north route that ran mostly north of Hwy. 169, a central route closer to developed parts of the township, and a southern route that passed along the existing Taconite Trail. That route found some support from those in attendance, mostly because it was an existing corridor and that it kept the noise from most parts of the township, with the exception of properties along the Swanson Shores Road.
But residents of Swanson Shores also turned out and voiced strong opposition to the alternative. The southern route, which would pass through Bear Head Lake State Park, would likely face statewide opposition from groups that have fought to keep ATVs out of state parks.
While a few speakers voiced support for a particular route, the overwhelming majority of speakers said they opposed any new designated route. “I don’t think attracting ATVers nationally should supersede our right to enjoyment of our property,” said resident Cindy Johnson.
Lisa Krause, a resident along Bear Head Lake State Park Road, said the noise from the current ATV route is already causing problems. “The noise going by on our property has literally stopped conversations on our deck and in our garage,” she said. “The noise is taking over the sounds of the wind and loons.”
Greg Junek, who had served on the study group, said he couldn’t recommend any of the alternatives the group had developed. “Why should anyone’s quiet enjoyment of their property be impacted?” he asked. Junek, and several others, noted that the township, which has no commercial district or services, would see no economic benefit from the trail, only negative impacts.
“I’ve experienced a lot of stress the past year with all the ATV traffic on the road by my house,” said Lori McIntire. “They like to rev as they go up the hill by my house,” she added.
Mary Jo Deters questioned why the state is pushing so hard for ATV trails. “Biking is the number one sport in Minnesota so I don’t understand all the funding going to ATV riding,” she said.
Irene Van Deusen noted that an existing ATV trail that runs to the south of the state park already exists and makes a new route unnecessary. But a White Iron Lake resident, who identified herself only as “Paula” said that route takes her five hours to get from her home to Tower.