One of the perks of reporting on natural resource issues, such as the decline of the region’s moose population, is that, on occasion, those working on the issue will provide you with valuable and … 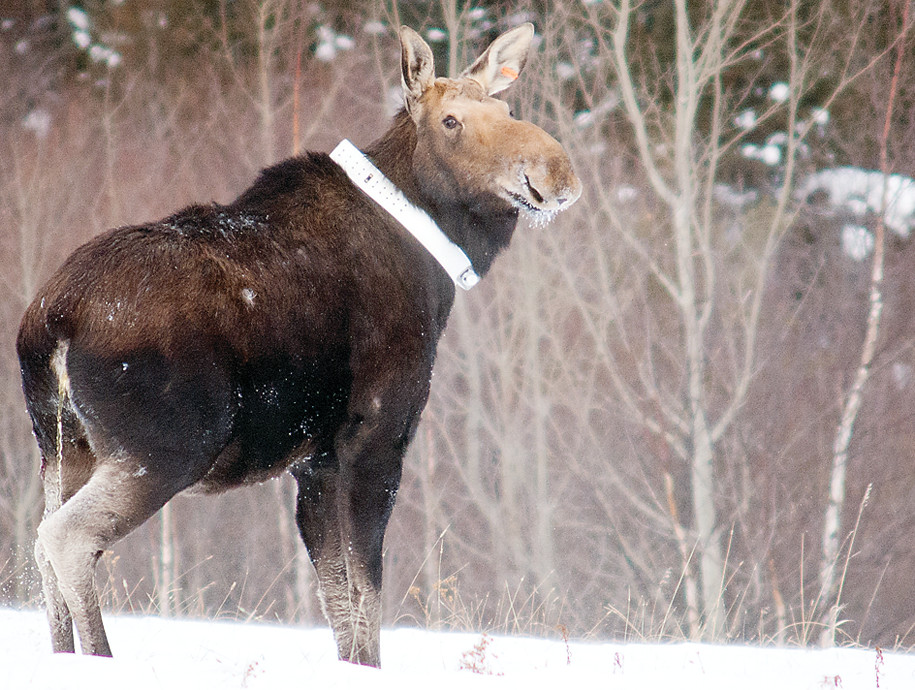 Some have suggested that moose in Minnesota are falling victim to the effects of climate change. But the evidence from DNR-sponsored research points to much more complexity. It also seems to suggest that higher deer numbers may be a significant factor, in that they spread diseases to moose and support a higher wolf population.
Posted Thursday, February 11, 2016 1:08 pm

One of the perks of reporting on natural resource issues, such as the decline of the region’s moose population, is that, on occasion, those working on the issue will provide you with valuable and detailed information that gives you a better understanding. That’s been the case in recent days as DNR moose researcher Glenn DelGuidice has shared quite a bit of information with me about ongoing research into the factors behind the drop in moose numbers. It's been useful, which is why I fully support the research.

That said, I’ve made no secret of my occasional skepticism of the suggestion that climate change is the primary cause of the moose decline. It’s not that I doubt climate change at all— the evidence for it is overwhelming. But we haven’t seen the kind of temperature changes in the past decade here in northeastern Minnesota that would explain the somewhat dramatic decline in moose numbers documented by the DNR’s annual aerial surveys.

There are, in my opinion, more supportable interpretations of the data we’ve seen from the DNR research so far.

I realize that the researchers have yet to draw any final conclusions about the causes of the moose decline. But I also know that the DNR, as an agency, hasn’t been shy about pointing the finger at the changing climate, which they regularly suggest is behind the moose decline.

That’s understandable given the nature of humans. Whether we operate in the private sector or the public, most of us try to avoid conflict and blame whenever possible. For an agency like the DNR, ascribing the moose decline to health factors related to climate change is naturally appealing, since Minnesotans can hardly blame a global and systemic problem like climate change on DNR management.

Conclude, on the other hand, that it’s too many deer or wolves, or overly aggressive forest management practices, that are killing the moose and the public is going to point fingers and demand that the DNR do something about it.

None of this is to suggest that the conclusions of moose researchers are suspect in any way. Sometimes, it’s just that when an explanation is really convenient, we might spend more time trying to prove it.

Take, for example, the 2009 study on the impact of temperature on moose stress, which has been widely interpreted within the research community as showing the link between climate change and declining moose numbers. In short, the study found that the subspecies of moose that live in Minnesota are susceptible to heat stress, even in winter, and that moose that experience heat stress, particularly in January, are more likely to succumb to health-related problems later in the year.

The study, it should be noted, found no causation, simply a correlation. But even if we accept the correlation as valid, which I do, it’s still a leap to suggest that warming temperatures are behind the sudden decline in moose numbers. For that to be the case, we would have to be able to demonstrate that January temperatures have, in fact, increased during the period that coincided with the decline in moose numbers, which began to show up in aerial survey data in the late 2000s. But such a trend is not apparent in the temperature data.

This week, I examined average January temperature records over the past 18 years at two weather stations, Gunflint Lake 10NW, and the International Falls airport. Both stations, to my knowledge, have remained in the same location during that period, which makes them good candidates for examining changes over time. One is on the east side of the state’s primary moose range and the other is just west of the moose range. I’ve included graphs of the average January temperatures at both stations, and as the graphs make clear, there’s no discernible pattern, just the usual noise you’d expect in local weather records.

So even if we accept that the health of moose deteriorates with warmer temperatures, that’s probably a consideration for the longer term. It doesn’t explain why moose numbers have dropped so precipitously in the past eight years or so.

It is, of course, possible that outlier years, like 2012, when we experienced unprecedented, summer-like heat in March, could kill large numbers of moose still sporting their winter coats. That could explain, in part, why the 2013 aerial moose survey result, which prompted the closure of the moose season, was so extraordinarily low. It’s more likely, however, that the 2013 count was a statistical blip, since the estimate rebounded considerably the following year, a result that seems unlikely if the 2013 results were truly reflective of a population crash.

One thing is for sure— there’s a lot we still don’t know about what makes these massive animals tick. It’s worth asking why, even in the 1980s, when we had sizable moose herds in both northeastern and northwestern Minnesota, the populations remained distinct.

Why were a beet field in Roseau County and the predominantly mature, mixed forests of northern St. Louis and Lake counties perfectly good habitat for moose in the 1980s, while the intensively-managed aspen woods and big bogs of Koochiching County were home to so few moose? Was intensive forest management a factor that limited moose numbers in north central Minnesota? Is it still a factor today?

Conventional wisdom in these parts is that since moose like browsing on shrubs, they benefit from more forest disturbance, like fire or logging. Yet moose do very well on Isle Royale, where there’s no logging and where fires are few— and they’ve done well for decades despite a once sizable wolf population that has now been decimated by disease and inbreeding.

On Isle Royale, of course, there aren’t any deer, and that’s kept the moose herd healthier. On the other hand, it’s far warmer there in winter than it is here in northeastern Minnesota, so if moose health is temperature-related, they should be feeling the effects on Isle Royale first. It’s the same story in northern New England, where winters are far warmer than here. While they have a different subspecies of moose than found here, and it appears that moose there may be declining as well, it’s seems pretty clear that moose can survive warmer winter temperatures than we experience here in northeastern Minnesota, at least at present.

They can also survive reasonable wolf predation, as the Isle Royale studies have shown. But take the situation here in northeastern Minnesota, where a high whitetail deer population increases the incidence of brainworm and liver flukes in moose, and helps to sustain one of the highest wolf densities found anywhere in North America, and you have a recipe for a stressed moose herd.

That’s why I have consistently pushed back against the “it’s climate change, there’s nothing we can do,” position of some officials. I continue to believe that DNR management decisions will determine whether we’ll have moose in our region for the foreseeable future.

Reducing deer numbers in the moose range remains the key. It will improve adult moose health and limit wolf numbers by reducing prey availability. The best way to limit deer numbers is through aggressive deer harvest in moose range, a ban on deer feeding in those areas, and by allowing the forests in moose range to grow older.

Moose don’t need clearcuts, despite the conventional wisdom. The primary moose range has plenty of brushy willow lowlands that provide adequate food for moose. Mature woods in our region also grow plenty of mountain maple in the understory, another popular browse species for moose— hence the more common name for it in these parts— moose maple.

Aggressive forest management is more likely to benefit deer. And the fact is, we don’t need aggressive harvests in much of moose country, anyway. The demand for timber is centered well to the south and west of moose range and there’s adequate supply elsewhere to sustain the wood products industry that exists here today.

This really comes down to political will. If we decide, as a state, that it’s important to sustain this northern forest icon, the DNR will need to take steps that will be unpopular with some powerful interest groups, deer hunters among them.

It’s far easier to blame the problem on climate change, throw up our hands, and go along with the status quo. Not everyone in the DNR is taking this position, but the agency has certainly planted that seed in the public’s mind. The research suggests it’s a whole lot more complicated than that.

Being a teacher in a challenging time