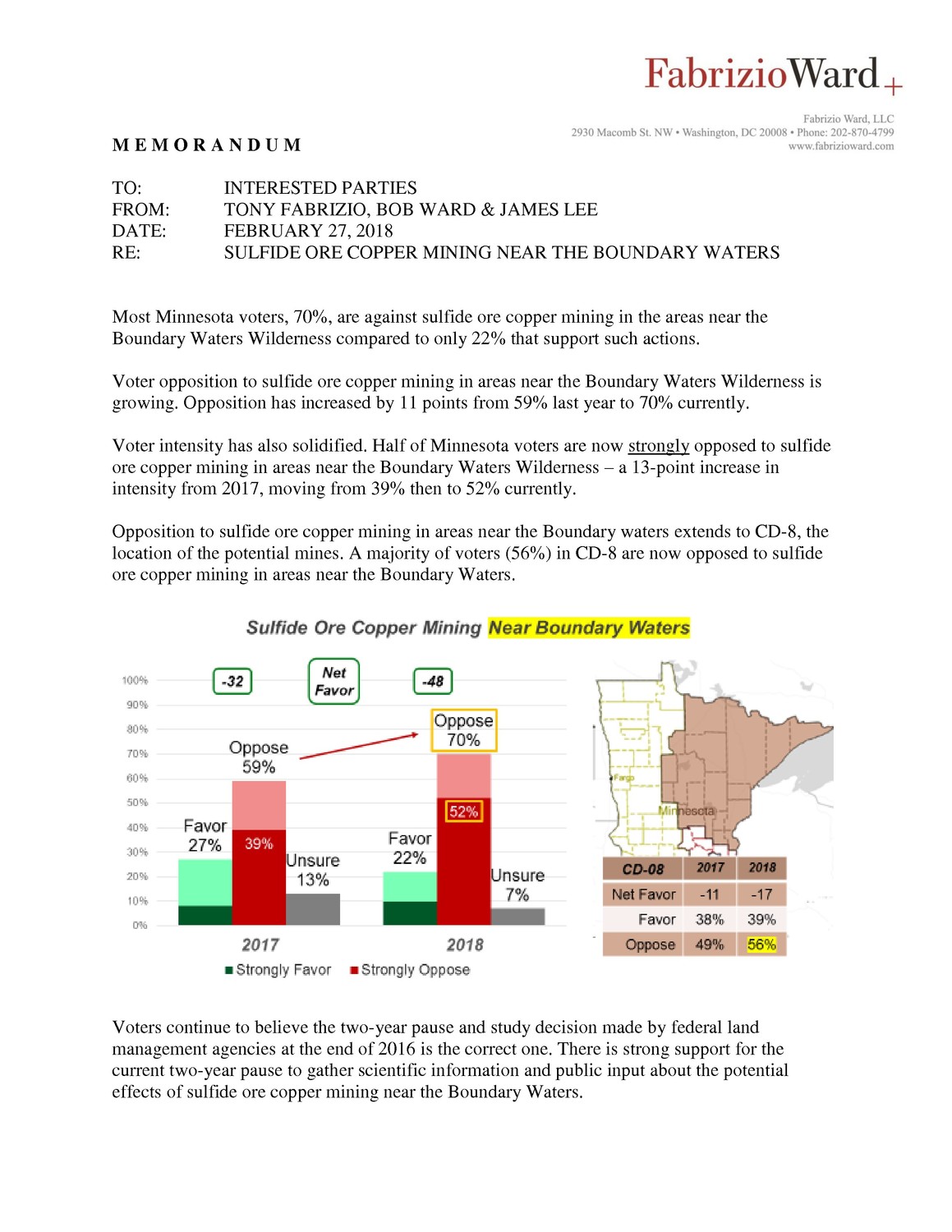 REGIONAL— Opposition to sulfide-based copper mining near the Boundary Waters is increasing in Minnesota and it could play a significant role in voters’ decisions in this year’s elections for both governor and the Eighth District congressional seat being vacated by Rick Nolan. That’s according to the findings of a new poll completed by FabrizioWard, a GOP-leaning polling firm that worked for both Donald Trump and Tim Pawlenty.

The Chilean mining giant Antofagasta has proposed the so-called Twin Metals mine near Ely, but the plan has faced considerable opposition, mostly out of concern for its location near the Kawishiwi River, a major watershed within the 1.1 million-acre wilderness.

Opposition to the idea continues to grow in northeastern Minnesota as well, and could play a role in the hotly-contested Eighth District congressional race. That’s particularly so on the DFL side, where the poll found that 77 percent of DFLers in the Eighth District oppose proposed mining near the Boundary Waters, with fully 61 percent expressing strong opposition. Statewide, 91 percent of DFLers are opposed. Meanwhile, 69 percent of self-identified independents oppose the mining plan, and even a 45 percent plurality of Republicans oppose it.

The latest poll found that a clear majority (56 percent) of all residents in the Eighth District now oppose sulfide mining near the BWCAW. That’s a jump from the 49-percent opposition the poll found last year. Support for the idea remains roughly the same, at 39 percent.

Two-thirds of Minnesotans also said they support Gov. Mark Dayton’s order banning sulfide mining on state lands near the BWCAW, with 50 percent expressing strong support. Only 28 percent said they oppose the order, with only 18 percent expressing strong opposition. Dayton issued his order in an effort to block further development of the Twin Metals project, which he has criticized as a potential threat to water quality in the wilderness.

The poll found that the issue is potentially potent politically, with 53 percent of respondents saying they would be more likely to vote for a governor who promised to continue Dayton’s ban on the development of the Twin Metals project. Just 12 percent said they would be more likely to support a candidate who would end the ban, while 35 percent said it would not impact their vote.