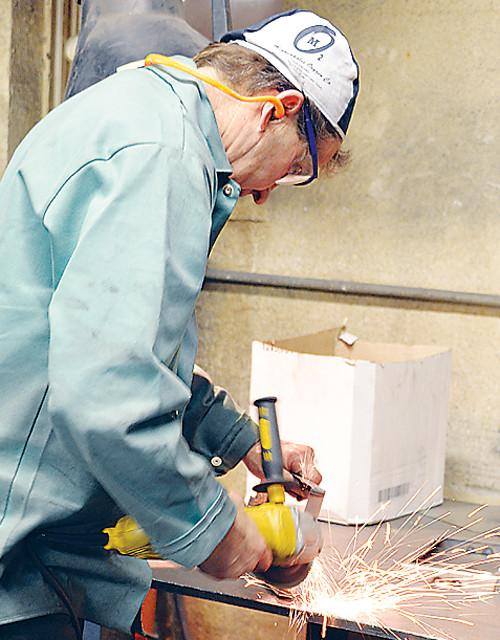 TOWER— Tiny Lamppa Manufacturing, tucked away in an old creamery on a back street in Tower, makes the cleanest-burning wood furnaces in the U.S. And if all goes according to plan, they won’t be so tiny a few years from now.

The company is poised to reap the rewards of years of experimentation to develop a truly smokeless wood furnace, and recent testing shows they’ve achieved a federal emissions standard that few in the industry thought any wood furnace could ever meet. But Lamppa Manufacturing didn’t just meet the standard, they beat it by nearly 40 percent.

The results were so shocking that officials with the Environmental Protection Agency weren’t quite sure what to do when the company filed its results with the federal regulator earlier this year and asked for a certificate for a standard that doesn’t take effect until 2020. That standard, which requires wood furnaces to emit no more than 0.15 pounds of soot per million BTUs, represents an 84-percent reduction from the current emission standard, which took effect in 2015. That’s an imposing hurdle for wood furnace manufacturers, one that’s already prompted several major manufacturers to shut down. A trade group representing the industry has filed suit to block the new standards, arguing among other things that the EPA was trying to shut down the industry.

And then Daryl Lamppa, 68, and his father Herb, 87, showed through testing conducted by Intertek, one of the largest and most respected testing labs in the country, that the standard could not only be met, but even exceeded.

It was the kind of development that should have pleased officials at the EPA, but Lamppa’s initial contacts with the agency were met mostly with bureaucratic indifference. After weeks with no action, Lamppa contacted Rep. Rick Nolan and his aide Jordan Metsa, along with Attorney General Lori Swanson, each of whom tried to help put him in touch with the right people at the EPA. It took months, and at one point Lamppa considered a media campaign to get his story out to the public. But then, last month, he had a breakthrough. The EPA reviewed the test results, gave the green light, and just last week sent Lamppa his official certification.

“We just had to get to the right people,” said Dale Horihan, who now manages the manufacturing operation for Lamppa. “Once we got through to them they were very helpful.”

The certification is far more than just bragging rights. Under federal law, no wood furnace manufacturer will be able to build or sell wood furnaces in the U.S. without verifying through independent testing that they can meet the standard. Lamppa is betting that few, if any, other manufacturers will be able to do so, which would put Lamppa Manufacturing in the catbird’s seat in an industry that sells about 28,000 units a year and generates approximately $150 million in revenues.

While Lamppa Manufacturing has been making some of the best wood stoves and furnaces in the country for decades, the company has remained remarkably small, mostly by design. The company has just a half dozen employees and currently counts its sales of wood furnaces in the dozens per year. It typically has more orders in a year than it can fulfill from its cramped and outdated manufacturing plant.

Yet having invested years of effort and several hundred thousand dollars on testing to demonstrate he makes the cleanest wood furnace manufactured anywhere, Lamppa is now planning to expand with a new and larger building set to be built in Tower’s industrial park. The potential to grow the company appears to be almost limitless. Tapping just ten percent of the current wood furnace market would mean boosting the company’s production by more than ten times and growing the company’s revenues from several hundred thousand dollars annually to many times that amount. An expansion of that scale, which would likely take several years to achieve, would require a significant expansion in their workforce, potentially providing dozens of good-paying manufacturing jobs in the community.

“It’s wonderful news,” said Tower Mayor Josh Carlson. “I’m happy for them. I know they’ve worked very hard to make such a huge accomplishment. As a city, we look forward to working with them in any way we can to create new good-paying jobs for our residents for years to come.”

Few people understand the key to burning wood cleanly better than Daryl and Herb Lamppa, and their proprietary system is designed to provide just the right mix of air for every fuel temperature and moisture level— using sensors and computerized controls to continuously adjust the stove’s controls for maximum efficiency. That not only makes Lamppa’s Vapor-Fire 100 furnace clean-burning, it also makes it highly efficient. “It’s a true wood gasifier,” said Lamppa, “It’s the only one that we know of that actually works.”

For anyone unfamiliar with a Lamppa furnace, a peek inside a burning wood box can be a shocker. In most such devices, the fire quickly encompasses the full wood box, burning all of the wood more or less simultaneously. In one of Lamppa’s furnaces, however, the fire burns from front to back, with the wood in the back remaining almost cool to the touch even as the wood up front burns briskly.

And the Vapor-Fire furnace is able to burn so cleanly and efficiently despite the fact that it burns standard cordwood, rather than more costly wood pellets. It also achieves its remarkable results without the use of a catalytic converter, which are used by some stoves to provide a secondary burn that helps reduce emissions. While that might help the stoves meet emissions standards under lab conditions, Lamppa notes the converters tend to soot up and require cleaning and occasional replacement to work effectively in the real world. And the catalytic stoves must provide a lever that allows users to bypass their converter, notes Lamppa, which he thinks should be illegal. “If you allow that, you might as well be using a barrel stove,” said Lamppa. “You can’t legally bypass the catalytic converter on your car, can you?” he added.

Lamppa is a firm believer in the value of heating with wood, noting that it is inexpensive and does not contribute to climate change as does the burning of oil or other fossil fuels. As wood grows, it takes carbon out of the atmosphere, and an equivalent amount of carbon is released when it’s burned. That’s different from burning fossil fuels, which are carbon that was effectively removed from the atmosphere’s carbon cycle tens of millions of years ago, at a time when the world was much hotter than it is today.

That means utilizing wood or biomass for heating has the potential to be part of the solution for greenhouse warming and related climate change. But wood stoves and furnaces, particularly in residential use, can create other problems, such as a buildup of dangerous creosote in chimneys and the production of significant amounts of particulate pollution. The fine particles of ash are known to cause human respiratory problems, particularly in cities subject to air inversions in winter, and those pollution concerns prompted the federal clampdown on emissions.

It was a problem that Daryl, and his father Herb, who assisted in the stove’s development, were determined to address— and decades before the federal government required it. So when stiffer regulations finally arrived, Lamppa Manufacturing had little difficulty meeting them because they had been investing time and money on clean-burning design and technology for decades.

And the Lamppa furnaces aren’t just clean-burning— they’re also highly efficient, reducing typical wood consumption by 30-40 percent, compared to other typical wood furnaces. Mikey Whitecamp, of the Twin Cities-based Environmental Initiative, said the Lamppa furnaces represent a major improvement for the environment. “Replacing one old-style dirty furnace with a modern, clean-burning furnace like the Vapor-Fire 100 is equivalent to removing 700 cars off the road,” he said.

When stiffer emissions standards went into effect in 2015, it prompted some major wood furnace manufacturers to shut down, which boosted Lamppa Manufacturing’s position in the wood furnace market. While there were dozens of wood furnace manufacturers up until recently, Lamppa said that number has now dropped to five, and three of those are located in Canada. And at this point, he’s not sure if any other company will be able to meet the far stiffer 2020 standard. If not, Lamppa’s wood furnaces would be the only ones that could legally be built and sold in the U.S. just three years from now.

Which has the company, not surprisingly, planning for significant growth, including a new manufacturing facility in Tower’s industrial park. Company officials are hoping to get construction underway as early as this fall.