Out of the Wilderness

Ely couple back home after a year in the BWCAW

ELY – David and Amy Freeman, who spent the last year living in the Boundary Waters Canoe Area Wilderness have returned home. The couple’s journey ended where it began, at the River Point Resort …

Out of the Wilderness

Ely couple back home after a year in the BWCAW 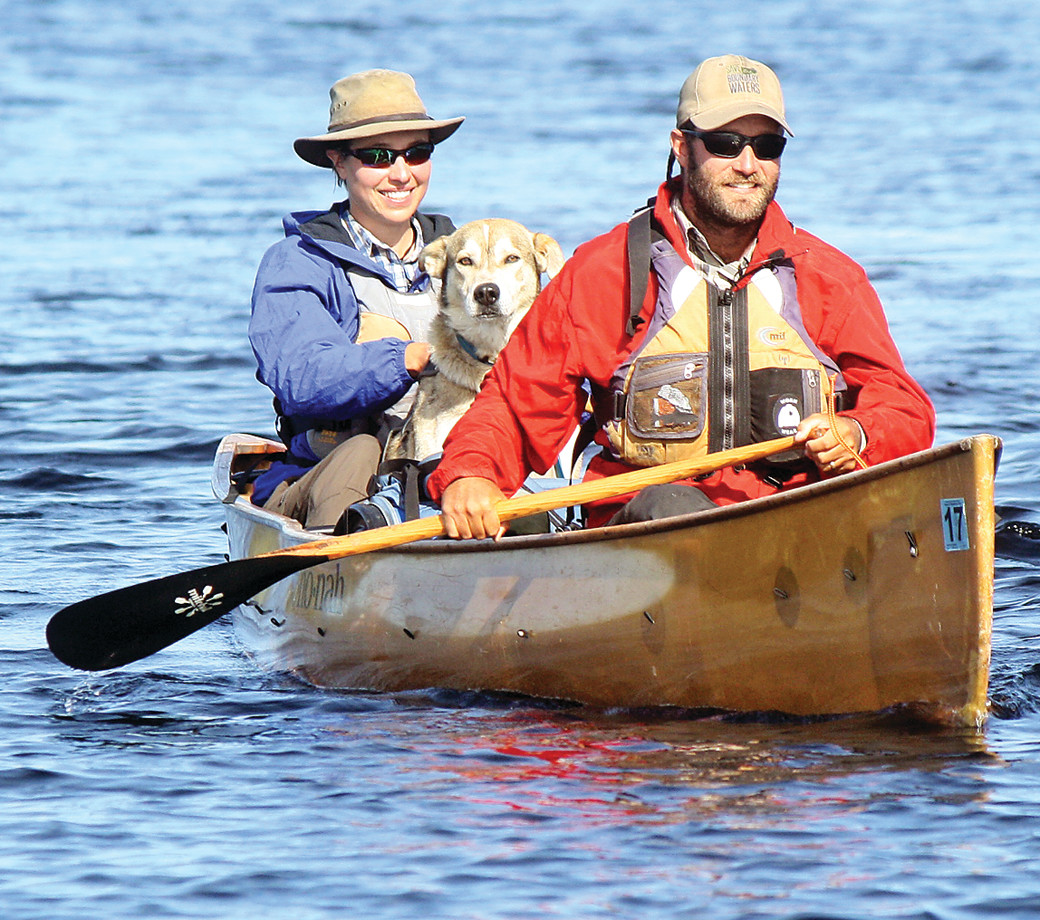 David and Amy Freeman, along with their adopted sled dog, “Tank,” paddle to the shore of River Point Resort and Outfitters on Birch Lake last Friday, 365 days after they left the same point to spend a year in the Boundary Waters Canoe Area Wilderness in an effort to draw attention to the risks of a proposed sulfide mining project adjacent to the wilderness.
photos by K. Vandervort

A flotilla of paddlers in 60-plus canoes and kayaks waited to greet David and Amy Freeman last Friday at the Highway 1 bridge on Birch Lake. 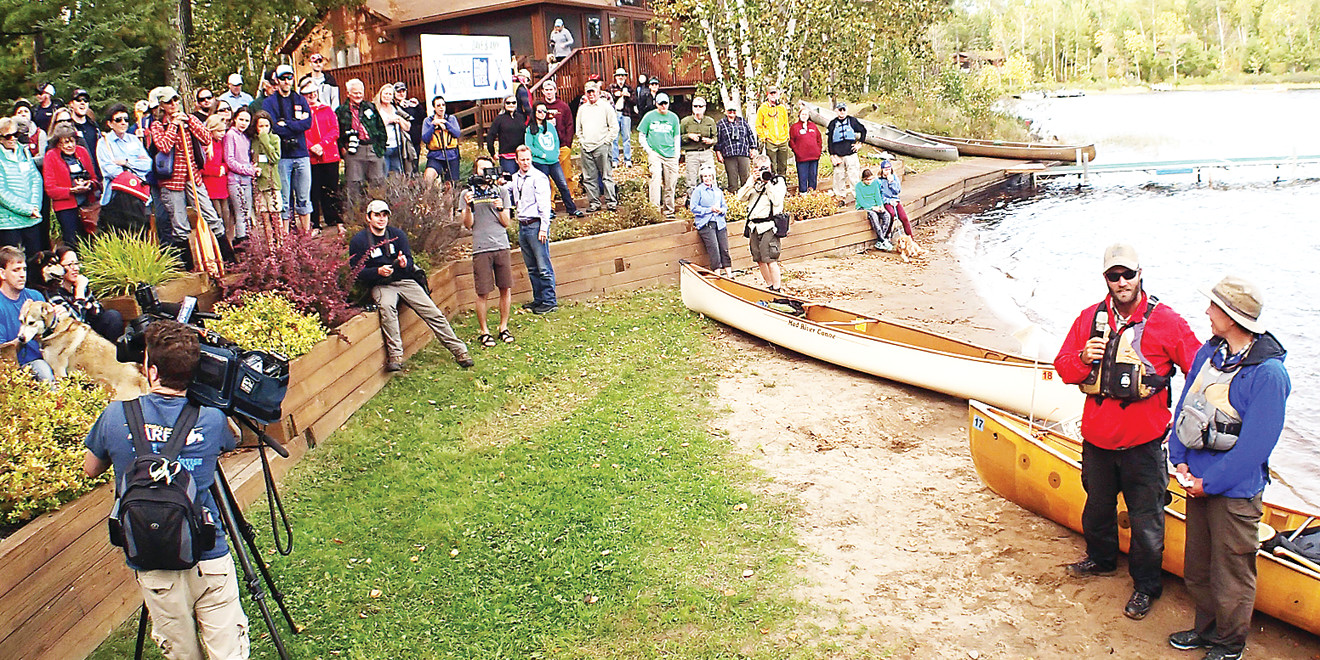 David and Amy Freeman were greeted by hundreds of supporters Friday on the shore of Birch Lake at River Point Resort and Outfitters.
Previous Next
Posted Wednesday, September 28, 2016 5:32 pm

ELY – David and Amy Freeman, who spent the last year living in the Boundary Waters Canoe Area Wilderness have returned home. The couple’s journey ended where it began, at the River Point Resort outside of Ely,

Hundreds of supporters in 60-plus canoes paddled out on Birch Lake to greet the couple last Friday. The group made their way past the site of the proposed Twin Metals sulfide mine along the waters that would flow directly into the pristine boundary waters area.

The Freemans’ motive behind the adventure was to raise awareness of what many believe are risks posed to the BWCAW and surrounding wilderness from proposed sulfide mining projects, and to support the efforts of the Campaign to Save the Boundary Waters.

“When we paddled in, we wanted to try and tell as many people about what a special place this is, and the risks that mines, such as the Twin Metals mines, pose on this very fragile ecosystem,” said David Freeman.

Since the Freemans’ left last September, they have camped at over 100 different sites, explored 500 bodies of water and traveled more than two-thousand miles by canoe and dog team.

On their Facebook blog last Friday, as the couple packed up camp for the last time and loaded their canoe to re-enter “the real world,” David wrote, “I would like to set the record straight on this concept. It is the other way around. We are re-entering a civilized world, a fast-paced world filled with cars, cell phones, airplanes and indoor plumbing. But don’t for one second think that is what’s real. We are leaving the real world, the world where Mother Nature rules, where wolf packs roam freely, where wild rice grows, where mosquitoes hatch, where loon chicks ride on their parents’ backs, where the sun rises and sets over the forest and lakes that are untrammeled– where no sign of this civilized world exists, except for latrines and fire grates.”

He said they were humbled by the thousands of actions others have taken to help protect the BWCAW. “We leave the Wilderness, after 367 days, confident that if we all continue speaking loudly for this quiet place our goal of permanently protecting the Boundary Waters from sulfide-ore copper mining will be achieved,” he said.

“I think our senses are heightened from being out in the woods for so long, you know, our smells, our hearing, everything,” David said in front of a gaggle of reporters and television cameras. “We’ll never be the same, I think it’s changed us forever.”

Amy Freeman said they entered the wilderness a year ago with the intent to bear witness to the BWCAW. “It was a chance to listen to the land and the water and to speak for this place through our (social media) posts and photos,” Amy Freeman said. “The point is, this place speaks to anyone who takes the time to listen. It is imperative that we preserve the BWCAW for future generations to have the opportunity to hear it too. I hope you all can hear the call to protect it.”

David wrote as they prepared to end their journey, “The wilderness has remained largely the same as it was a year ago, changing leaves, crisp and foggy fall mornings, loons’ elegant summer plumage fading, moose rutting– all like a clock tuned to the Earth’s rhythms, A year is a blink of an eye for the wilderness, but for us this year has been transformative. We have been forever changed by the Wilderness and leave it knowing that we must speak loudly for this quiet place, and that our collected voices have the power to effect change, ensuring that wild places like the Boundary Waters remain for future generations.”

David admitted that when he and Amy went into the wilderness, they weren’t concerned about getting frostbite, or the constant buzzing of the bugs. “We were worried that people might forget about us,” he said. “We didn’t do this just to spend a year in the Boundary Waters, we did this to bear witness to this place and share it with others. Over the last year, the momentum that we gained makes us even more confident moving forward.”

There is still a lot of work to do by those intent on saving the BWCAW from the risks of sulfide mining. As one voyage ends for the Freemans, another begins. The couple left Ely on Sunday to catch a flight to Washington, D.C., to lobby lawmakers. A documentary film about Dave and Amy’s year in the wilderness, called ‘Bear Witness’ is set to premiere at the Fresh Coast Film Festival in Marquette, Mich. on Oct. 15. They also plan to write a book about their year in the wilderness.

“Our next step is to keep sharing this place and keep telling people that it needs to be protected,” he said.  “We have a national treasure right in our backyard in Minnesota.”