Boundary changes on the western fringe tilt blue, but addition of northern suburbs likely to balance the score

REGIONAL— The new political boundaries in Minnesota’s Eighth District appear to have given the district a bit more of a purplish hue, now encompassing some of the most Democratic-leaning …

Boundary changes on the western fringe tilt blue, but addition of northern suburbs likely to balance the score 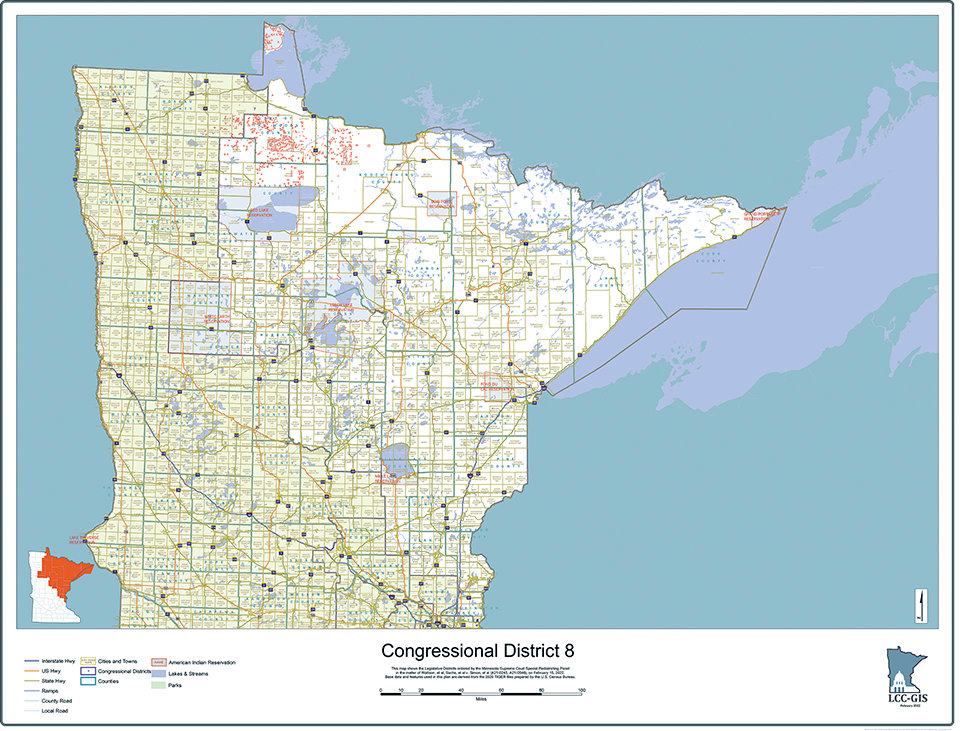 REGIONAL— The new political boundaries in Minnesota’s Eighth District appear to have given the district a bit more of a purplish hue, now encompassing some of the most Democratic-leaning territory anywhere in Minnesota. At the same time, two of the state’s reddest counties, Morrison and Wadena, were dropped from the district as a result of the new political maps approved by a judicial panel earlier this month.
The new boundaries, established following the completion of the 2020 census, won’t make the Eighth District an easy win for Democrats— not by a long shot. The district, once a Democratic stronghold, has trended sharply rightward since 2010 and remains a likely GOP seat, currently held by Republican Rep. Pete Stauber.
Yet the new boundaries, designed to equalize the population between all eight of Minnesota’s congressional districts, could make the Eighth a bit more competitive with a well-chosen Democratic candidate, particularly in a mid-term election, when lower turnout can occasionally play to the advantage of a challenger.
While the boundaries of the Eighth remain unchanged in northeastern Minnesota, the new boundaries push the Eighth far to the west, to within 40 miles of the North Dakota border in some locations. While much of northwestern Minnesota is now GOP-leaning, that’s not universally true. The Red Lake and White Earth reservations encompass much of the Eighth District’s new western frontier and they comprise much friendlier territory for Democrats than some of the surrounding townships off the reservation. Overall, the new Eighth District is home to a substantially larger native population than before— a total of 30,656 compared to 17,096 in the old Eighth District.
Red Lake, in particular, is one of the bluest places in Minnesota. In 2020, Democrat Collin Peterson, who then represented Minnesota’s Seventh District, beat his GOP challenger, Michelle Fischbach, on the Red Lake Reservation by an overwhelming 1,264 to 99. Yet, while Red Lake’s blue tint is overwhelming, the number of voters found there is relatively small.
Mahnomen County, which includes most of the White Earth Reservation, is home to twice as many voters as Red Lake, although they are much more evenly divided than at Red Lake, a fact that reflects a more mixed population at White Earth.
In 2020, Peterson won the county 1,386 to 1,239 for Fischbach. It’s a similar story in the city of Bemidji, long a part of the Seventh District. It’s a new addition to the Eighth and it has a history of voting narrowly Democratic.
While the addition to two reservations and the city of Bemidji provide a modest advantage to the Democrats in the new Eighth, Democrats can expect an even bigger boost from the elimination of much of Morrison and Wadena counties from the new Eighth District. In the most recent general election, those counties went for the Republican congressional candidate by a better than three-to-one margin. Those counties, which are now part of Minnesota’s Seventh District, helping to turn that former swing district a deeper shade of red.
Those changes could make the difference in a close race in the Eighth, such as in the 2018 contest between Stauber and DFLer Joe Radinovich, which Stauber won by just over 17,000 votes. The changes wouldn’t have made a difference, however, in 2020, when Stauber beat DFLer Quinn Nystrom by 76,000 votes.
Besides, notes Larry Jacobs, Director of the Center for the Study of Politics and Government at the University of Minnesota’s Humphrey School, the potential upside for Democrats in the northwestern corner of the Eighth will almost certainly be offset by a slight change in boundaries in the district’s far southeast. Northern Washington County, including St. Paul exurbs like Hugo and Scandia, encompasses a tiny portion of the Eighth District, but it has one thing most of the Eighth District lacks— a relatively dense population, with considerable numbers of reliably Republican voters. “The GOP advantage is strong in the northern metro,” Jacobs told the Timberjay, which is why he calls it a safe seat for Stauber.
Even so, redistricting has given the Eighth a slightly bluer tinge than it had before. 2020 election data showed that the GOP margin in northern Washington County wasn’t as overwhelming as other parts of the district. Overall, the GOP congressional candidate enjoyed a roughly 5,000 vote advantage in that portion of the county, which means it only partially compensates for the loss of approximately 13,000 GOP votes in Morrison and Wadena counties, and the modest gains that Democrats can expect in places like Red Lake and Bemidji.
Yet, barring a strong Democratic candidate, this former Democratic stronghold appears likely to remain in GOP hands for the foreseeable future.