ELY- When firefighters battled a wildfire that began May 17 near Bezhik Lake that burned 782 acres of forest, they were joined the next day by a partner that helped them communicate and coordinate … 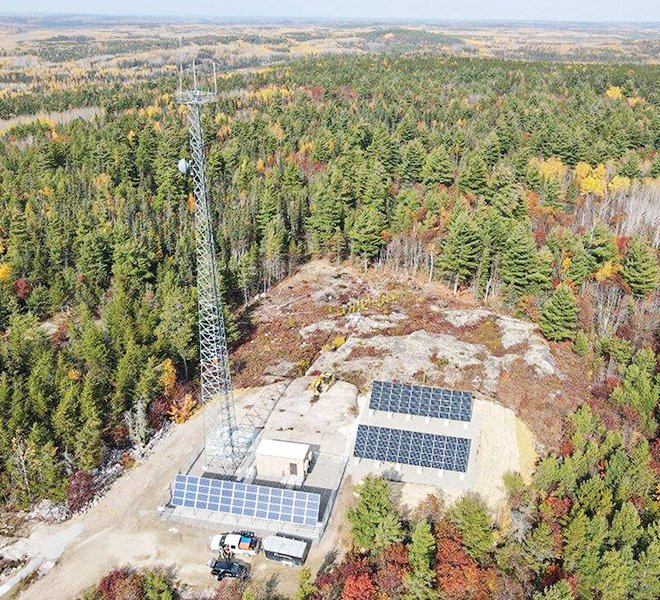 ELY- When firefighters battled a wildfire that began May 17 near Bezhik Lake that burned 782 acres of forest, they were joined the next day by a partner that helped them communicate and coordinate their efforts.
A new, purpose-built cell site located on the Echo Trail, northwest of Ely near Meander Lake and Lake Jeanette State Forest, went into operation on May 18, one of the first primarily powered by solar in the Midwest region.
This FirstNet site will provide coverage when traveling along the Echo Trail. It will also give first responders on FirstNet – America’s public safety network – access to always-on, 24-hours-a-day priority and preemption across voice and data.
“For our first responders battling the Bezhik Fire, this new FirstNet tower provided critical wireless coverage necessary for communication in a very remote area where we previously had poor to no coverage,” St. Louis County Sheriff Ross Litman said. “FirstNet is helping give public safety the connectivity they need to communicate and coordinate emergency response efforts, especially in remote wilderness areas of St. Louis County.”
“We’re pleased this new site could provide critical wireless coverage for the firefighters and first responders who battled and contained the Bezhik Fire near the Echo Trail,” AT&T Minnesota President Paul Weirtz said. “We have a responsibility unlike any other network provider and couldn’t be more pleased to support the public safety mission by bringing first responders – and residents – greater access to the connectivity they need.”
AT&T and the First Responder Network Authority are collaborating in the cell tower expansion project to give emergency responders a major boost in their wireless communications. Other FirstNet sites already launched in Minnesota communities include Bagley, Blackduck, Cloquet, Finlayson, Graceville, Grygla, Hovland, Isabella, Lewiston and Williams.
Unlike commercial networks, FirstNet provides dedicated mobile broadband. To ensure coverage is placed where first responders need it most, the build out is being done with direct feedback from state and public safety officials.
Sites are constructed using Band 14 spectrum, a nationwide, high quality spectrum set aside by the government specifically for FirstNet, as well as AT&T’s commercial spectrum. In an emergency, Band 14 can be cleared and locked just for emergency response. Band 14 has ben added to more than 600 existing sites across Minnesota.
This new infrastructure will also help improve the overall coverage experience for AT&T wireless customers in the area. Residents, visitors and businesses can take advantage of the AT&T spectrum bands, as well as Band 14 when capacity is available.
About FirstNet
The First Responder Network Authority (FirstNet Authority) is an independent authority within the U.S. Department of Commerce. Chartered in 2012, its mission is to ensure the building, deployment, and operation of a nationwide broadband network that equips first responders to save lives and protect U.S. communities.