REGIONAL— Hunters had a consistent story coming out of the opening weekend of the firearms deer season: Not many deer and not much shooting. “It’s been pretty slow,” said … 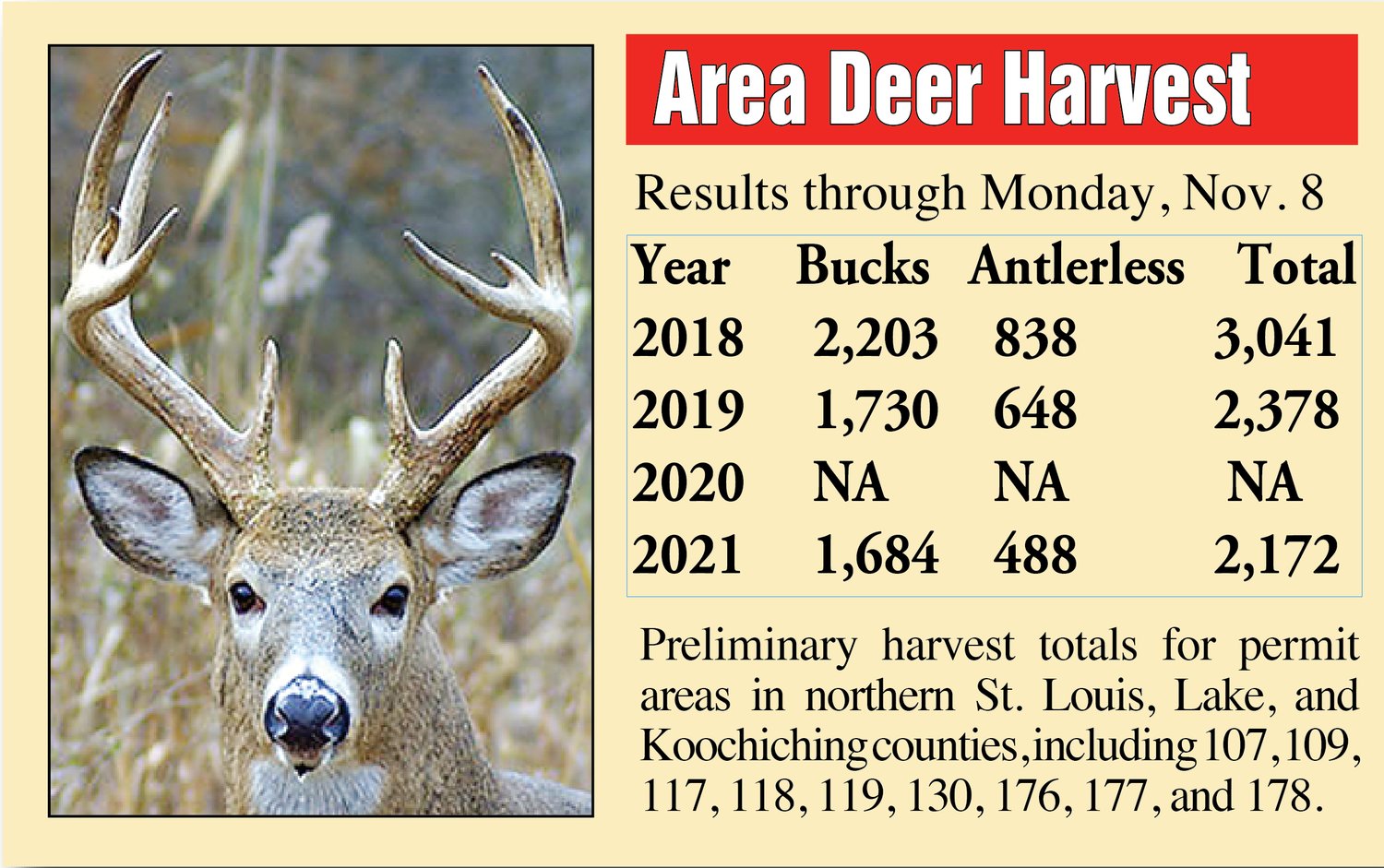 REGIONAL— Hunters had a consistent story coming out of the opening weekend of the firearms deer season: Not many deer and not much shooting.
“It’s been pretty slow,” said Terry Wagoner, of Soudan, who hunts along the Mud Creek Road between Tower and Ely. “I saw a little fawn and some of the other guys got glimpses, but that’s about it. There’s very little sign and there wasn’t much shooting.”
There was more sign and more deer over in the Greaney area, but that didn’t necessarily translate into more hunter success, at least not over the opener. “We haven’t shot anything and none of my neighbors have shot anything,” said Dave Broten, of Tower, who hunts on property he owns along the Little Fork River.
Broten had opportunities over the weekend. In fact, when he spoke to the Timberjay on Monday, it was from his deer stand. “I’m looking out at a doe in one [shooting] lane and a spike buck in another,” he said. With nearly two weeks of hunting still ahead, Broten said he planned to hold out, at least for a while, in hopes of getting a shot at the big ten-pointer that had shown up recently on a neighbor’s trail cam.
Rob Bryers, who hunts north of Lake Vermilion, near Buyck, agreed it was a remarkably quiet opener. “I thought last year was quiet, but this year was definitely more so,” he said.
Most hunters said they’re hoping for the more winter-like weather, including some snow, forecasted to arrive ahead of the second weekend. Broten said the mild weather over the first few days appeared to be limiting deer movement. He said he was seeing some of the same deer multiple times during the day. “They’re not moving far,” he said.
Hunters weren’t the only ones reporting limited success. Conservation officer reports from around the area cited similar results. Orr area CO Troy Fondie described the opener as a “non-event”, with the lowest number of deer harvested in his memory. He said most hunters reported few deer and plenty of wolf sign. “A number of camp sites and hunting cabins were vacant,” Fondie added.
Aaron Larson, the new CO in the Tower area, reported hearing little success from hunters over opener, with minimal deer movement. Ely area CO Sean Williams reported a relatively high number of hunters in camps along the Echo Trail, but said the majority had reported no success.
So far, deer registrations in the area suggest that the reports from hunters and COs are right on the mark. Through the first three days of the hunt, hunters had registered a total of 2,172 deer in the nine permit areas within the Timberjay coverage area. That’s well below opening weekend results from 2018 and 2019, while 2020 results weren’t available as of press time.
Not that every unsuccessful hunter lacked opportunity. Bryers, who reported seeing little sign over the weekend, had his chance at “a brute” on Monday. But without tracking snow, Bryers went for a head shot, not wanting to wound an animal he might not find. As most hunters know, that’s a lot smaller target. In this case, said Bryers, it was a clean miss. The buck stood stock still for a second or two after Bryers’ gun sounded, before bounding off.
Hunters may have more favorable conditions for the hunt’s second weekend, with snow and colder weather forecast to set in by Friday. Temperatures over the weekend are expected to be more seasonable, with highs around freezing and overnight lows in the low 20s.