Is an insect apocalypse just ahead?

REGIONAL— Are we headed for a mosquito apocalypse here in the North Country? Perhaps a black fly bonanza? Or a deer fly debacle? Maybe all of the above?In fact, the circumstances appear to have …

Is an insect apocalypse just ahead? 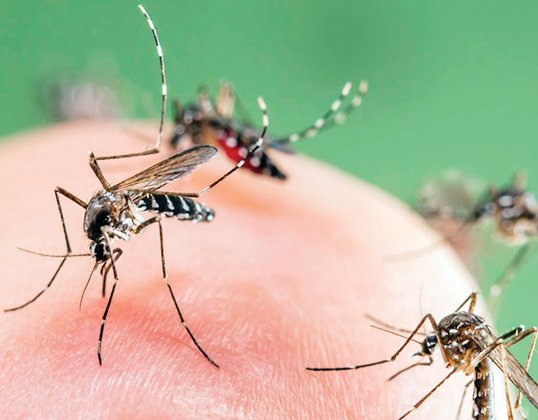 Mosquitoes and black flies have emerged in large numbers already this spring, testing the willpower of area residents. The deer flies should be emerging soon, and will add further to the hordes of biting insects.
Posted Wednesday, June 8, 2022 7:39 pm

REGIONAL— Are we headed for a mosquito apocalypse here in the North Country? Perhaps a black fly bonanza? Or a deer fly debacle? Maybe all of the above?
In fact, the circumstances appear to have aligned themselves for one of the worst bug seasons in our area in recent years, and it’s already become apparent according to what we’re hearing from folks and experiencing in our own backyard in Vermilion Lake Township.
We know the bugs will be bad in June. That just comes with living in the North Country. But this year could be worse than usual, thanks in part to last year’s drought, which was followed by one of the wettest springs in memory.
It can be complicated writing about bugs like mosquitoes in Minnesota in part because we have so many different varieties— more than 50 different species of mosquitoes, each with different habitat preferences and seasons. But in general, a drought year leaves more mosquito eggs out on the landscape. Mosquitoes generally lay their eggs in standing water, or in low areas that would likely flood after heavy rain. In a dry year, many of those eggs don’t hatch, but most mosquito eggs have the ability to remain dormant for several years, just waiting for wet conditions to allow them to hatch. Those conditions have been served up perfectly this spring, so expect an even larger hatch than usual.
Most of the mosquitoes that hatch in the spring have the potential to live most of the summer, pestering birds and mammals here, including we humans. In the past, the spring hatches would diminish over the course of the summer as predators, like bats, consumed large quantities of them. A single little brown or northern-long-eared bat can consume 1,000 mosquitoes in an hour of feeding and a nursing female bat may need to consume 4,500 mosquitoes or similarly-sized insects in a day, according to the U.S. Forest Service. Bats were once our best friends in the fight against mosquitoes, but whitenose syndrome has wiped out about 95 percent of them, and it will be decades, if ever, before bat populations can recover to the level we used to experience here in the North Country.
That means our forests are likely to have more mosquitoes, and for longer periods of time, in the summer than we used to experience here. Add in our current circumstances, of drought followed by flooding, and the deck is stacked for a truly horrible mosquito season.
And mosquitos aren’t the only insect pestering us in the woods right now. The black fly explosion this spring appears worse than usual as well. Black flies, commonly called gnats by some folks in our area, hatch from running water and there’s more of that than usual thanks to our wet spring.
And while they haven’t really appeared yet, thanks to our cooler-than-average May, the deer flies will be out very soon and the wet conditions should help to ensure a healthy crop as well. Unlike black flies, deer fly larvae grow and hatch in mucky conditions, most typical in our area in wet ditches or swamp edges. They normally peak in our area in mid-June to early July and can deliver a painful bite. The good news, if there is any, is that deer fly larvae typically take at least a year to develop in the muck, so they’re unlikely to be as affected by variations in precipitation as mosquitoes or even black flies. If last year’s drought killed off some deer fly larvae, we could actually see fewer of these nasty biters than in a typical year. Time will tell on that.
Regardless, it’s likely to be a tough few weeks in the woods. I guess we should be glad we can escape indoors. Just imagine what the next few weeks will be like for the bears and the deer and the moose. It’s times like these when it’s easy to recognize the downsides of life in the wild.

January was mild, and among the gloomiest ever

Canada jays may be a victim of a warming climate