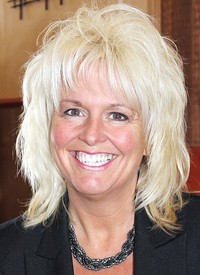 Hujanen, a mother and longtime community activist from rural Tower, made a strong showing four years ago in her effort to unseat incumbent commissioner Mike Forsman. Hu-janen said she remains concerned that many county residents feel their voices aren’t being heard at the county board level.

“Right now, there are a lot of people and a lot of families in our region who feel they don’t have a strong advocate on the county board. I would certainly change that, starting on Day One,” said Hujanen.

Hujanen is well-known for her tireless work on behalf of others. She is just completing a two-year term as regional governor of Soroptimists International, a women’s service organization that is active around the world. As part of her duties, she has served as a United Nations delegate on three occasions, most recently working with the UN Commission on the Status of Women. In that capacity, she worked with other organizers and representatives from around the world to combat domestic abuse, gender inequality, as well as sex and child labor trafficking.

Hujanen, however, directs most of her energies closer to home. She is an active board member of the Northland Chapter of the American Red Cross and serves as well on the organization’s statewide philanthropy board. She is a frequent disaster volunteer for the Red Cross, both in Minnesota and elsewhere. In 2012 and 2013, she provided disaster relief following fires in Cook and Menahga. She also worked for several weeks in New York City, coordinating Red Cross relief in the wake of Hurricane Sandy.

Hujanen is also president of the Lake Country Power trust board, which oversees the rural cooperative’s Operation Round-Up®. She was recently re-elected as president by fellow board members.

In her various volunteer efforts, Hujanen said she has learned how to work well with others to get things done— and she says that’s a particularly important quality for a county commissioner. She said she doesn’t bring a political agenda to the race, simply a desire to help the county work better for its residents, and she would be open to all ideas and perspectives that help move the county towards that goal.

“We need a more positive and cooperative atmosphere on the county board,”she said.

Hujanen said she’s also concerned that the seven-member board lacks any representation from women. “Women bring a different perspective and approach to a lot of issues that directly affect families in the county.”

Hujanen said the extensive network of contacts that she has developed through her volunteer efforts would be another critically-important resource as commissioner. “My work has taken me around the region, around the U.S., and even overseas, and that’s given me a broader understanding of many of the issues we’re now just starting to face here in St. Louis County. We can learn a lot from the experiences of others, and the creativity they’ve shown in addressing problems in their own communities.”

Hujanen said she’s ready to take on the commissioner’s job full-time. A former real estate agent, she has discontinued that career and has focused on community work full-time for the past two years. “I’m ready to devote all my time and attention to meeting the needs of the district, and to use the many tools I’ve developed in the past few years to address the many concerns of residents.”

Hujanen, who lives in Vermilion Lake Township, is married to Robert Hujanen, a logger and truck driver. She has two older sons, Mark and Justin, both in college, and two younger boys, Ryan and Logan, still at home.