REGIONAL- It appears that the historic flooding in the Rainy River Basin has made a temporary island of the historic Kettle Falls Hotel. According to the Water Levels Committee of the International … 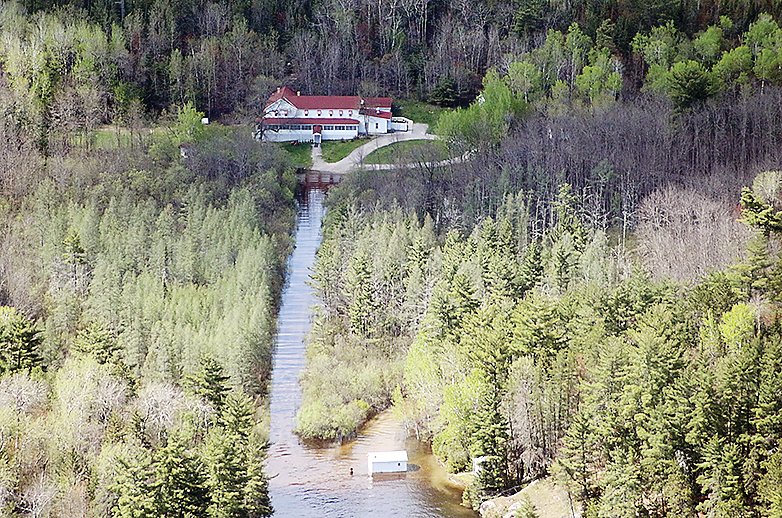 REGIONAL- It appears that the historic flooding in the Rainy River Basin has made a temporary island of the historic Kettle Falls Hotel. According to the Water Levels Committee of the International Rainy Lake-Lake of the Woods Watershed Board, water has been circumventing the controlling dams in the area and flowing north of the hotel into American Channel from the nearby bay on Namakan Lake.
The situation was reported in a June 16 update from the watershed board:
“On June 14, it was discovered that water is overflowing from Namakan Lake into Rainy Lake through an area north of the Kettle Falls hotel and Namakan dams,” the update said. “There does not appear to have been much erosion and bedrock is visible so there currently aren’t concerns of the overflow channel eroding further. Both Kettle and Squirrel Falls dams were visually inspected and there are no concerns with either dam structure.”
The Timberjay spoke Tuesday with Scott Jutila, U.S. Army Corps of Engineers advisor to the board, for more information about a phenomenon that he said was nothing new, but more pronounced given the record-high water levels of late.
“We’ve had some emails from people who lived up in the area for quite awhile who were saying this isn’t really a new occurrence,” he said. “It’s happened in the past at fairly high water levels.”
Jutila speculated that at some point a beaver dam may have blocked flow through that area and over time it has filled in with sediment. Jutila used historic aerial imagery of the area available through Google Earth Pro to investigate his hypothesis.
“As you look at them you can see that it looks like things kind of trickled through,” he said. “I think it was either a 2015 or 2013 image where you could see evidence is kind of there that there’s a definitive channel occurring and then an area that looks like it’s ponded water behind it. With the high waters, things kind of washed out.”
Jutila confirmed that the channel won’t be growing in the foreseeable future.
“It’s Canadian Shield, a type of bedrock up there,” he said. “(The high water) washed away the thin layer of soil in there and water is flowing across, but it can’t reach any further down because of the bedrock, so that creates a natural control.”
Shallow and limited in width, Jutila said that the flow was “very small” relative to the total flow pouring through the dams at Kettle Falls and Squirrel Falls on the Canadian side.
“It’s on the order of maybe less than a half a percent,” he said. “It’s not causing a substantial change in lake levels on either side.”
Staff members from the U.S. Geological Survey have been making flow measurements and will continue to do so for the next few weeks as the waters recede, Jutila said. They’ll also be doing some additional survey to determine the elevation at which the overflow occurs.
Future assessment
It’s too soon to predict when a formal assessment of the flood of 2022 will be done, Jutila said, but with August and October board meetings already scheduled, the flood will be a primary topic of discussion. But one doesn’t need to wait to see what’s been happening.
“Widespread flooding has a widespread impact on people and resources in the basin,” Jutila said. “Roads are flooded. Businesses aren’t able to function, and those that are, are doing so at extreme costs. I understand the impacts.
On the flip side, Jutila and his colleagues are working to provide the public with more information to hopefully better understand the extreme circumstances that came together to create this historic flooding.
“We have to lay out all those facts of what happened to the public. They deserve an accounting of what happened. It was just an overwhelming amount of water. If we started off a foot lower in that additional storage at the bottom, that was just a small fraction of the overall amount of water that came into the lakes. It isn’t easy to understand, so we’ve got some diagrams and things like that we’re working on and hopefully we’ll be able to better explain that to people. But it is an extreme event and it has extreme impacts on people’s lives right now.”
Jutila also said that now is the time to start taking steps to be more resilient in the event another high water event would occur. What that specifically means, however, will take some work to figure out.
“I don’t know the answers to how to become more resilient,” he said. “Maybe, for example, road infrastructure needs to be raised because a lot of people were cut off from getting to their properties. Maybe we need better information for people about the elevations of their properties so that they can protect those better. But you really want to find out what causes the flooding so that if you know what caused it you can come up with the right solutions.”