PIKE RIVER— The crowd of onlookers began trickling in last Thursday as hatchery operations here finally got underway. It was the latest start at the Pike River hatchery on record, and it … 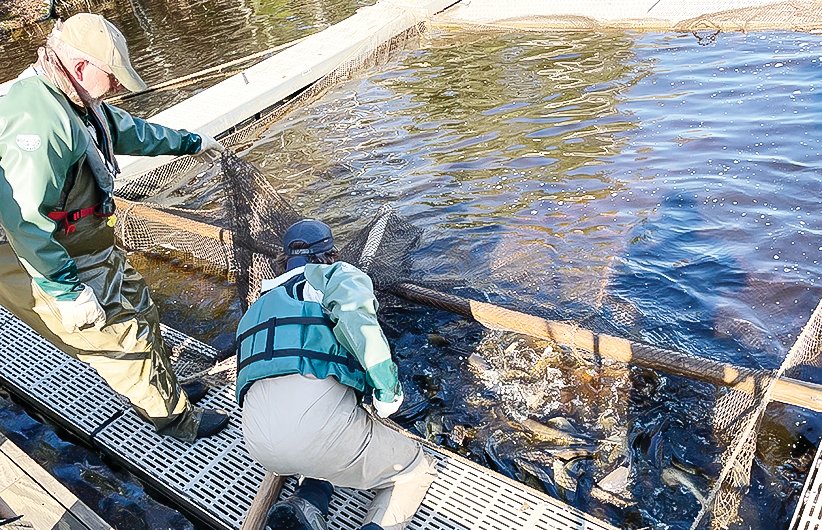 DNR fisheries workers concentrate a netful of female walleye for sorting. Unripe fish were quickly released, while DNR staff stripped eggs from those that were ripe, before being released.
M. Helmberger 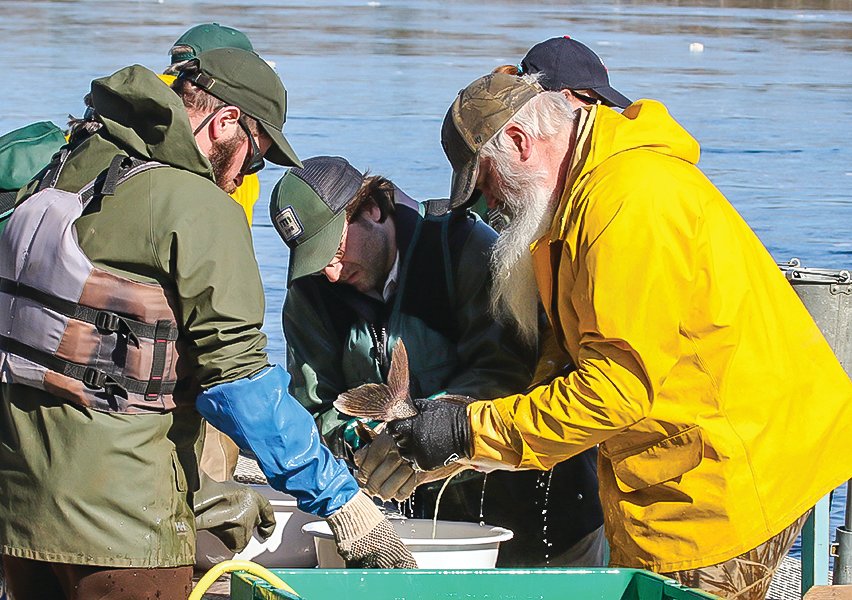 PIKE RIVER— The crowd of onlookers began trickling in last Thursday as hatchery operations here finally got underway. It was the latest start at the Pike River hatchery on record, and it appears the walleye were waiting as nearly 4,000 fish entered the fish trap set at the river’s mouth within the first couple days.
They were mostly male walleye, which are typically much smaller than the egg-laden females, but there were plenty of big females as well, with 400 sitting in the nets as of Friday and they all needed to be assessed. The ripe ones were put in water-filled bins to await egg-stripping, while the unripe ones were released to finish their spawning naturally. As the big females were sorted, there were plenty of oohs and ahhs from the onlookers, who had their first opportunity since the onset of COVID to observe the hatchery activities up close.
Most of the females weren’t ripe, which limited the hatchery’s first-day harvest to just 65 quarts. But warmer temperatures that finally set in later in the week helped to ripen up the females and the fisheries staff was able to boost production significantly by Friday and Saturday, and wrapped up the egg-stripping portion of the operation on Sunday, having collected 540 quarts, a bit more than their adjusted quota of 500 quarts. “It only took four days of egg-collecting,” said Brent Flatten, the DNR’s assistant hatchery supervisor.
The eggs are now incubating in the hatchery building, where they’ll hatch about Memorial Day. From there, they’ll be distributed to nearly two dozen lakes in the Tower DNR work area along with dozens of other locations around northern Minnesota.
Local area lakes set for stocking include:
Base
• Nigh, 80,000 (fry)
• Pauline, 50,000
• Purvis, 50,000
• Wolf, 75,000
• Mashkenode, 64,000
• Parent, 143,000
• Big, 750,000
• Astrid, 60,000
• Nels, 44,000
• Whisper, 20,000
Maude, 50,000
• Slim, 87,000
• Low, 106,000
• Johnson, 212,000
• Shagawa, 2,300,000
• Vermilion, 4,000,000
Surplus
• Vermilion, 1,000,000
• Pike River Flowage, 252,000
• Ojibway, 67,000

Obliterating the sound of silence

On track for record dry June