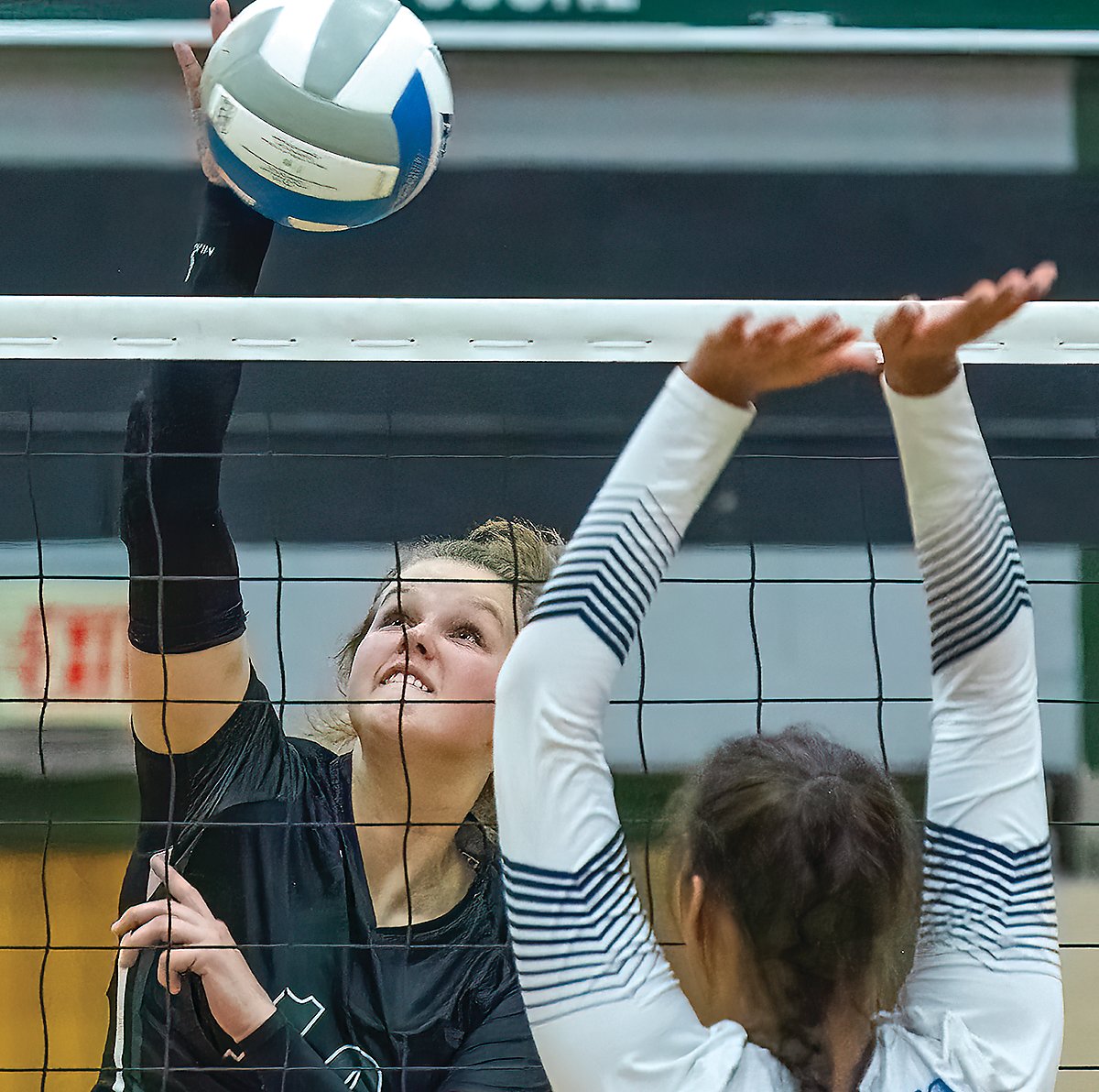 Else Bee, of Northeast Range goes up for a kill while the Grizzlies’ Hannah Kinsey tries to block.
D. Colburn 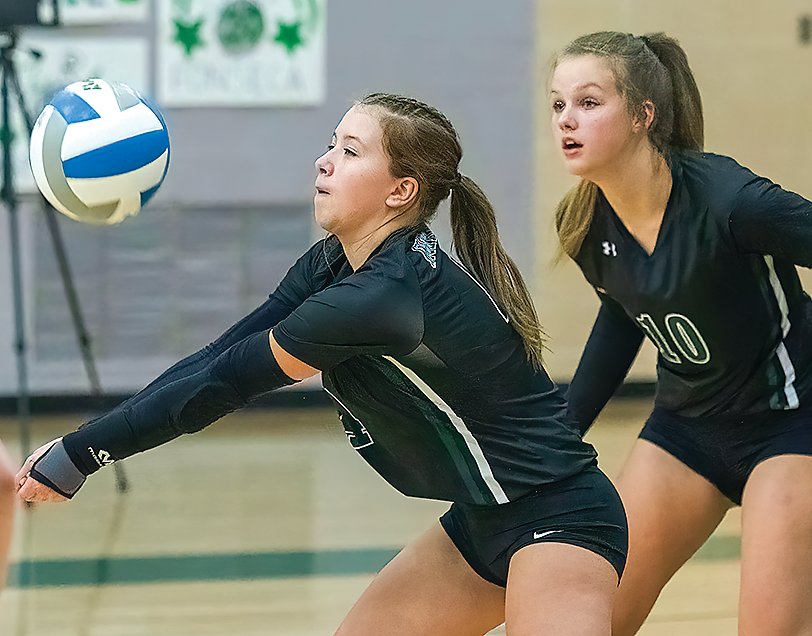 The Nighthawks’ Danica Sundblad focuses on a dig while Else Bee looks on.
D. Colburn 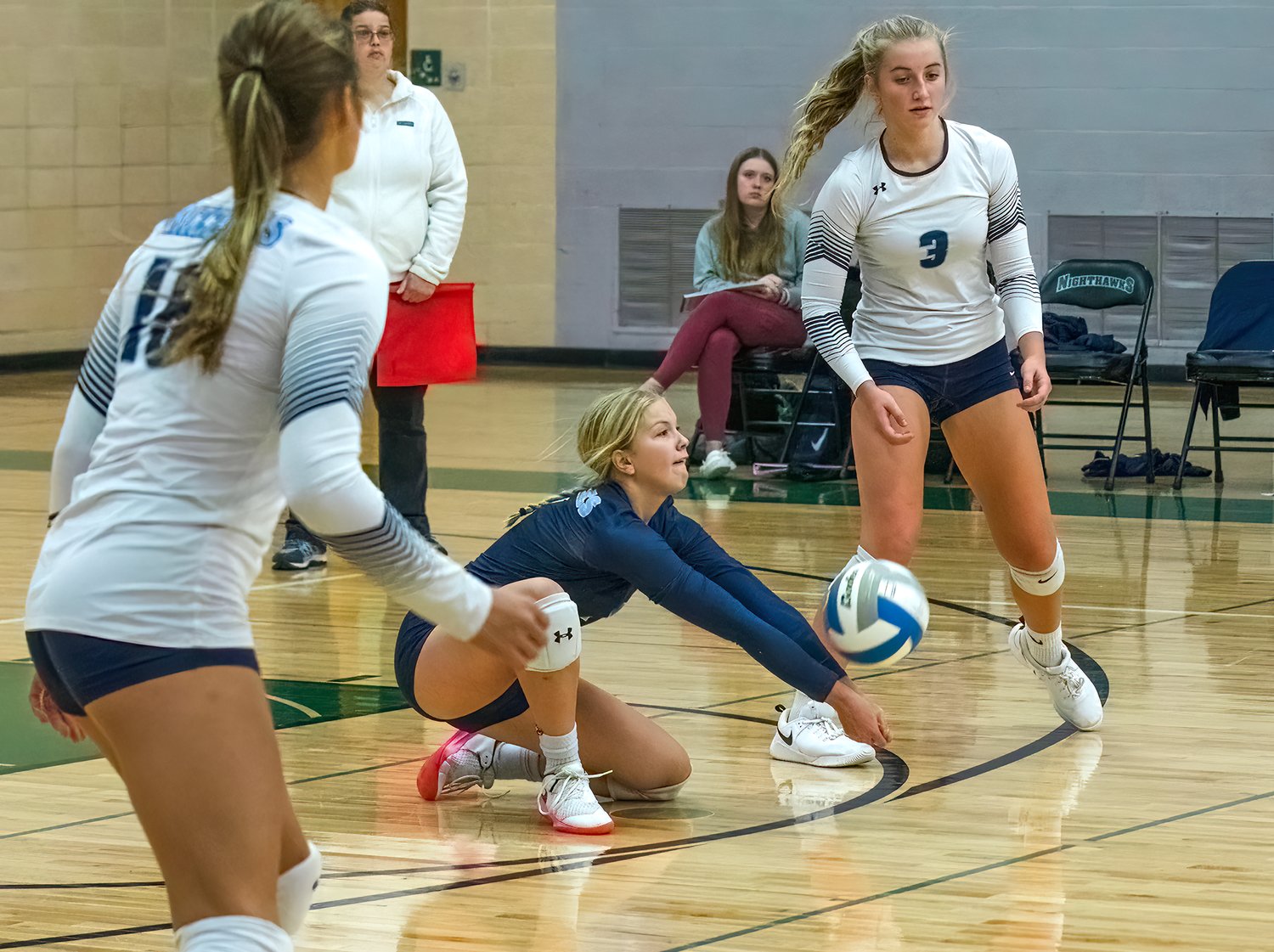 BABBITT- With power hitter Hannah Reichensperger and a host of other experienced seniors gone from last year’s section finals team, Northeast Range Head Coach Misty Roseth came into this season knowing she was facing a rebuilding year.
It’s been all of that as the Nighthawks are winless in match play and have had to look for signs of improvement in competitiveness and occasional set wins.
The Nighthawks saw both of those things in a Sept. 29 match against North Woods in Babbitt, hanging tough the first two sets and winning the third before fading in the fourth to lose 3-1.
With Addy Hartway at the service line, the Grizzlies had an early four-point run to take a 6-2 lead in the first set, but North Woods wouldn’t see a similar run the rest of the set. NER covered the floor well and got a couple of big hits from sophomore Maizy Sunblad, but the Nighthawks gave up a couple of points here and there as the Grizzlies claimed the set 25-17.
North Woods won the second set by the same 25-17 score, but a confident Nighthawks squad gave the Grizzlies a run for their money, leading 13-10 midway through the set. But a kill by North Woods’ Hannah Kinsey tied the game at 14-14, and with Talise Goodsky’s talent for mixing up her serves the Grizzlies suddenly broke through with an 8-0 run to take command and eventually close out the set.
Clearly emboldened, NER shook off the loss and cranked up the intensity a notch in the third set. Trailing early, Sunblad served up an ace in a three-point flurry that tied the score 7-7. Another three-point run put the Nighthawks up 11-8, and with sophomore Danica Sunblad at the service line NER built the lead to eight at 17-9. The Nighthawks had to fight to hold onto this one, as the Grizzlies got back to within two at 20-18, but NER held things together for a 25-21 win.
That highlight was followed by the night’s lowlight for NER. The Grizzlies’ Lauren Burnett opened the fourth set with a service ace that ignited a 9-0 run that ended with NER sophomore Else Bee tapping a return to a hole in the Grizzlies’ defense. But the damage was done. NER closed to within 13-6, but a rejuvenated North Woods squad dominated the rest of the way with a 12-1 beatdown to take the set 25-1 and the match 3-1.
Roseth was pleased overall with what she saw from the young Nighthawks squad.
“I’m proud of them tonight,” she said. “They hadn’t played like that yet, as a team. It’s a new year for them, a new team, brand-spanking new, so to see them do something like that was fantastic.”
As for North Woods Head Coach Kandi Olson, she was glad to get the win after her team came out somewhat flat.
“It was another good test for us,” Olson said. “We are definitely working on maintaining our concentration and focus throughout a full match so that we can try to finish them a bit sooner than we are.”
A 2-0 tournament win over NER the previous weekend might have had some influence on the Grizzlies’ slow start, Olson admitted.
“I’m certain than any time you face a team and you feel comfortable with them, you have the potential of being overconfident. I feel like we just went into that match just a little too comfortable, and we had to up our game there at the end,” Olson said.
Roseth said that the sophomore Sunblads, Maizy and Danica, are the most experienced Nighthawks and have developed as team leaders for a squad that sports an inexperienced seventh grader and a couple of players who didn’t see any varsity action last year.
“Maizy was a full-time setter and now she’s hitting and digging, which isn’t normal for her,” Roseth said. “They’re covering the floor, but we need to put the ball away, and it’s just a struggle for us.”
Danica Sunblad led NER with 34 digs, followed by Maizy Sunblad with 33, Allison Flug with 28, and Else Bee with 21. Maizy Sunblad led the team in kills with nine, while bee added four. Individual stats for North Woods had not been received by press time.